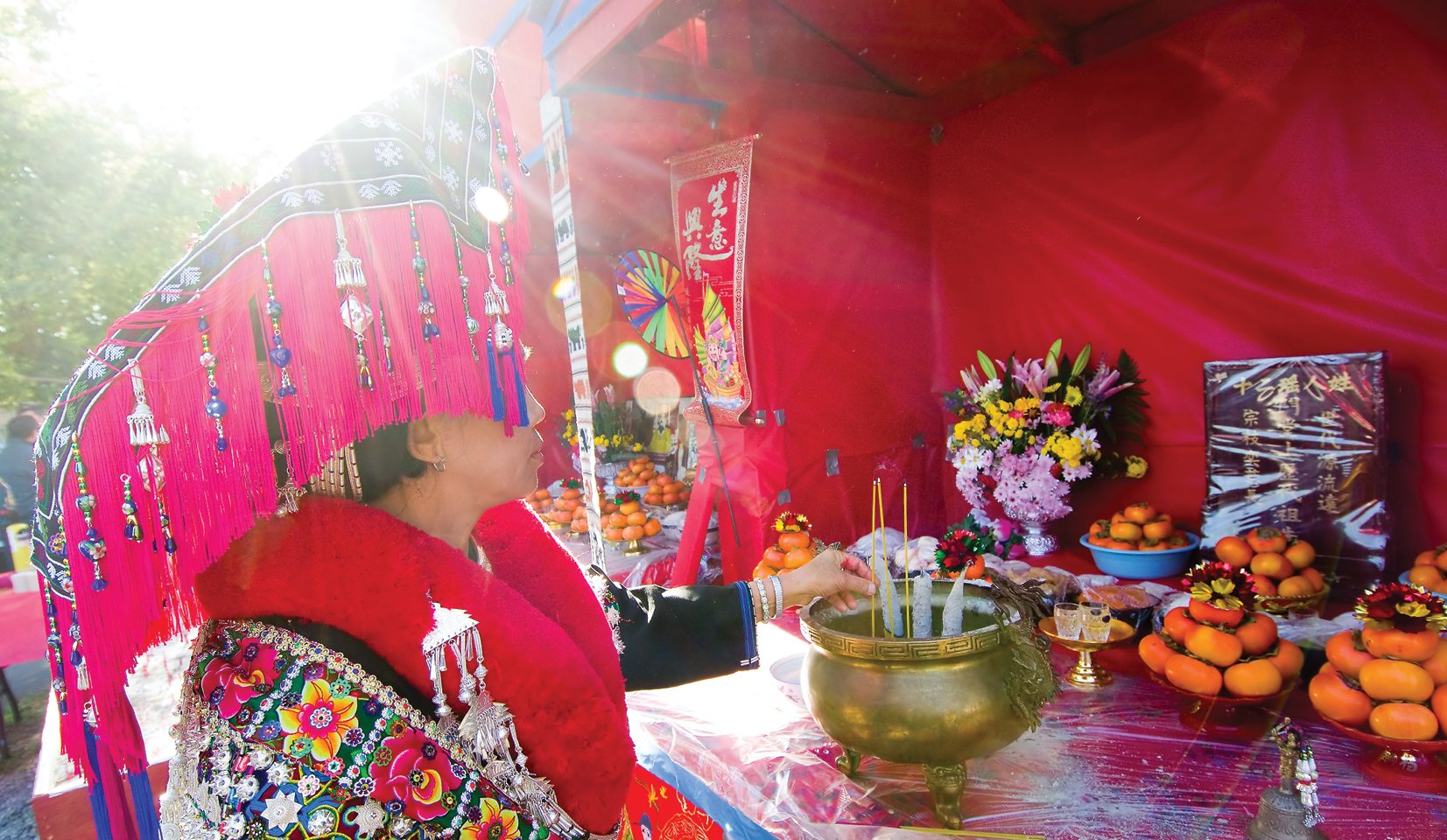 A woman in traditional Iu Mien dress at the King Pan Festival in Oakland, California in 2007. Photo by David Yu

We Mien trace our ancestral roots back as far as ancient China. In the last several hundred years, we migrated to Southeast Asian countries, blending our culture with the Vietnamese, Thai, and Lao cultures. Our settlement in Laos created a path for many thousands of Mien who arrived in the United States as war refugees beginning in 1975, along with hundreds of thousands of other Southeast Asians. It was one of the largest resettlements of refugees in US history. We don’t know exactly how many people of Mien heritage live in Oregon; as of the last count, over a decade ago, we numbered two thousand individuals.

Before arriving in the States, many Mien knew cultural preservation was going to be a challenge. As refugees and as nomadic people dependent on natural resources, we realized adjusting to Western culture would be difficult, but building better lives for our families was a necessity—the only way to survive. Today, approximately four decades later, much of the originality of our culture and many of our traditions have been lost to assimilation.

In the years after resettlement, as our families became more established and government support for Southeast Asian refugees dissipated, we looked to one another for aid. With our long history of marginalization, we didn’t seek help outside our community. Then the COVID-19 pandemic came—a situation too overwhelming to deal with on our own. Getting help with health care, unemployment, and other issues has required us to work to make our presence known to US government agencies and elected officials. As we have become more visible, others have become more interested in learning about our people, which in turn has forced our community to become researchers and anthropologists almost overnight. Without formal education and training in history or anthropology, many of us have had to rely on our family stories and memories, or what you might call collective or cultural memory. When we speak of memories, we think of events and facts that support them. Today, many of us have photos, video recordings, books, and written notes to refer to and look back on. Like many Indigenous groups, the Mien have limited resources and no written language. We rely on verbal and oral communication, along with memory.

Because of their age and medical conditions, many of the elders in the refugee community can recall only portions of our history. Many also depend on artifacts and cultural objects to trigger memories. Such visual cues represent not only our history but also deep value, preservation, and survival through many generations. Our culture is symbolic, and its history is embedded in our traditions, customs, and practices as well as our artifacts. Every object has a story, and every story is etched with memories of a rich and diverse heritage.

Growing up as the first generation of Mien born in the United States, people in my age group were fortunate to be exposed to many cultural traditions and customs that are now lost or disappearing. Many of us spent our childhoods huddled in small circles with other children, assembled around a Mien senior storyteller on a handwoven bamboo stool, listening to their tales. These ranged from folklore about mythical creatures and gods, to turbulence in ancient China, to harrowing stories of fleeing war-torn Laos and the Secret War.

When I was a child, dinner parties and religious gatherings also provided opportunities for meaningful conversation. At these events, adults exchanged stories, compared life experiences, and checked in with one another. These discussions prompted memories and provided space for people who had been greatly affected by trauma to engage in their own form of group therapy. The presence of young children like me also helped the adults remember their childhoods. Hearing about the daily lives of first-generation students and youth, these adults, who were fortunate enough to have had access to education, would recall the time when schools were first introduced to the refugee camps. Sometimes groups of adults who had been classmates would share memories, and I would hear giggles and laughter followed by stories of walking to class, sharing lunches, or getting their palms lashed by bamboo whips for being naughty. Their memories were so vivid, so bold in detail, it was as if they were reliving their childhoods.

Frequently, conversation turned to our elders’ experiences as refugees fleeing from the communist government in Laos. These stories were dark and full of death, loss, and violence. A guest would speak, sometimes just one word, triggering others to join in the conversation. Some had been separated indefinitely from their families, some had relatives still missing, some had been captured for years and held as prisoners of war, and some had to engage in desperate acts such as drugging their children with opium to sedate them as they fled. None of them walked away unscathed by trauma.

As a child, I did not understand the gravity or value of these conversations. It wasn’t until I was much older, working in a career where I was trained in advocacy and trauma, that I understood how crucial a role memory had to play in communities like mine, not just in learning but in preserving our culture and our identity.

Being born and raised as a first-generation American has been something of a double-edged sword. I am fortunate to have had direct exposure to my elders, who held all the wisdom and knowledge of our people, but I also found myself in a constant struggle with the traditional teachings. I fought hard to modernize what I considered archaic, not realizing that I was working against the only tools I had for understanding my culture and history. I now recognize how incredibly resilient Indigenous communities truly are, including my Mien community.

Today, in my work as a consultant and a community and systems advocate, I go far beyond just teaching others about my heritage and the rich history of the Iu Mien. I find that educating others about my community has been a learning experience for me as well. The journey of the Mien did not end forty years ago with our arrival on American soil, but continues into the future as our community grows.

May Saechao is a first-generation American who was born and raised in the Pacific Northwest, where she has spent the majority of her life. She believes that sharing stories about her people, the Iu Mien, is important because so little is known about their culture and heritage.

So honored to have the privilege to meet someone like you. Being a minority myself; not being completely raised from my Mexican roots. I know now the importance of keeping and/or teaching our children the roots and culture of whom we are or came from. I am blessed to not only have a Mein significant other, but I also am thankful to have Mein grandchildren! Together we can keep our heritage alive. Rather than fight against each other. We need to pull together be proud and represent our diversity and respect our elders as well. Thank you Mae Saechao for your contribution to highlighting the importance of keeping Mein culture alive.

I very much appreciate that your are encouraging younger generations of iu mien ppl to keep our culture flourishing through this country...

Photographer Joe Whittle explores how traditional practices of Native Americans of the Columbia Plateau strengthen communities and preserve connections to the land.

Visiting family in Egypt during Eid Al-Adha, when sheep and cattle are sacrificed and their meat is given away, an Egyptian-American writer considers family, faith, and violence.