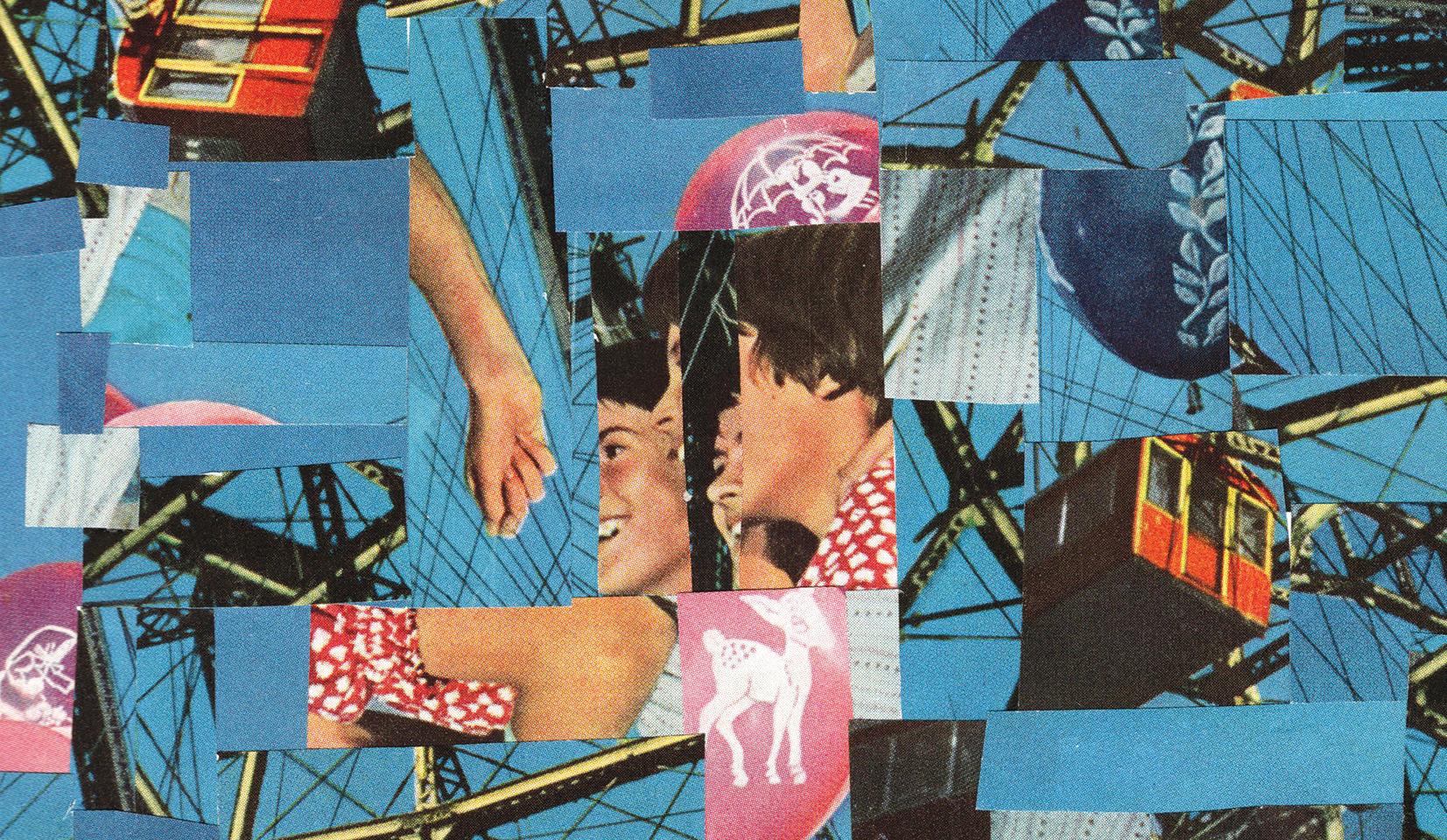 When I was six, I entered a talent contest at the county fair and danced the Twist onstage in front of a noisy crowd. At the next year’s fair, I shook hands with the television pilot Sky King and his niece, Penny. A few years later, I beat a grown man in the pie-eating contest and got a red transistor radio. The fair was the pinnacle of my summer, of every summer in a big county full of ranchers, loggers, and a lot of lonely land.

At the fair, children ran feral. I wandered the long, cool exhibit halls filled with pickles, quilts, and giant squash. We went to the rodeo and the demolition derby, a concert of joyous noise and violence. In the commercial building I collected buttons advertising vinyl siding, Bible stories, and tractors. In the fragrant livestock pens I leaned on the metal gates to gaze at pigs, chickens, and lambs destined for auction and slaughter. Sharp sun soaked the acres of unkempt grass, and my brother and I would curl up in a spot of weak shade for lunch: hot dogs, baked potatoes wrapped in foil, cotton candy spun out of thin air, and ice cream dribbling onto our bare legs.

But first, last, we came for the midway, the screams and shouts, the Doppler roar of the rollercoaster, the throng of humid teenagers necking in corners. Conic speakers perched like shofar at the intersecting paths, blaring static-ridden pop songs. We came for the Hammer, the Scrambler, and the Zipper, for the faint nausea of centrifugal force. We came to toss Ping-Pong balls into fishbowls and throw darts at balloons, dreaming of a giant stuffed panda bear. August’s twilight was a gentle dimming of the day’s glare that seemed to last for hours, until the shadows rose and turned the sky black. Then the lights snapped on, flashing gold and scarlet, green and orange, and my chest swelled with something tender and unnameable. I didn’t know the words for a long time, but I came for the melancholy. I came for the longing.

How vivid these scenes are. How treacherous. Memory is the encoding of experience, a mysterious collection of chemicals and cues. The act of remembering is called retrieval, and it could hardly be a less accurate term. We think our lives are recorded somehow, captured and preserved. Every retrieval of a memory is the active re-creation of it, a process known as reconstruction. Each memory—of anything, of everything—is built from scraps and shards, and is never complete. John Updike said that when he tried to remember his past, all he found was “a background of dark matter.”
We can’t see this mass, but it moves us. “All that is not said—remains, buzzing.”

We take the traces of encoding and then fill in the gaps with fragments: inferences, traces of other events, new lessons. Everything we experience can impact how we remember, what we remember. With each pass, each recollection, tiny deformations appear. No memory is ever accurate, exactly, never a neutral snapshot of what happened. It lives once and is gone, and with each retrieval the reconstructed memory is more deeply laid, more subtly framed, more nuanced. The older our memories, the more they have changed.

Who can I trust? Our siblings reconstruct memories from similar fragments but differing inferences and hopes—inferences and hopes that diverge from ours more with every passing year. Our supposedly shared memories are often near but never exact. My brother and sister and I have never experienced the same event, even when we were standing shoulder to shoulder.

Each time a person is told that their memory of an event is correct, the memory becomes more vivid. “That’s right,” my brother says to me, when I ask him about the demolition derby, the ice cream. And the scene sharpens; the colors grow brighter. That’s right, I say to myself, every time I remember. The faint scent of manure and the perfume of popcorn wafts by. My toes curl in the dusty grass.

When I was fourteen, I went to the county fair to work on the midway. I looked older than I was; I felt simply old. I longed to leave my family, my dismal school, the smallness of that big county. My parents and I lived in a fragile cease-fire, and I kept a running list of disasters in my journal: Vietnam and Charles Manson, the riot in Attica and the Pentagon Papers. I had no more trust in the adult world, which denied me freedom while failing us all. I was frantic for a different life, and I didn’t see a way out that didn’t involve burning everything down. I was already halfway to a bad end.

At the start of the fair, I had gotten a carny initiation, a free ride on the Octopus that didn’t stop when it was supposed to but kept gyrating until I was screaming to get off, until I cried. Then I was part of the crew, with their dirty hands and easy smiles. I worked the milk bottle game, trying to talk men into knocking over the pyramid with softballs. “You, sir, you look like a winner!” I shouted, often to boys I knew from school. The three bottles were numbered 2, 6, and 14. “Under 9, over 19, a winner every time!” I shouted, trying to get the customers to aim for particular ones. But the bottles were weighted with lead, the balls were mushy, and I had been shown how to stack the bottles off-center. I knew a lot of the boys and they knew me, and yet somehow we were strangers there. This was a different play on a different stage. They took my bait and I took their money and they hurled, eyes on the giant panda bear over my head. The bottles tilted and rocked, but didn’t fall. “Oh, that was so close!” I yelled. “Try again!” All around, the other talkers shouted in a good-natured battle for customers: “Hey, buddy, give this a try!” Through the hot, dusty afternoons, I straightened the heavy bottles and gathered the scattered softballs. On into the night, I called out to the passing crowd. It only costs a dollar to win! A winner every time.

Was I disappointed to discover the game was rigged? No. The cynicism of a smart fourteen-year-old is ancient and deep. I knew that grown-ups had fixed all the games long ago; the rules weren’t fair, justice was never served. So I gathered the softballs and swung my long hair in a flick of disdain as the young men threw.

The sweat dried under my arms as the shell of sky paled into turquoise and black. The neon flickered into rainbows and the crowd got older, noisier for a while, then quieter; then the last few people wandered out and the taillights faded. The music stopped and we cleaned up. Sometimes we took a quick roller-coaster ride or a spin on the Scrambler before we shuttered everything for the night. I had met a boy, a young man of about eighteen, traveling with the carnival. Toward the end of the week, just as everything was closing up, we stepped onto the Ferris wheel—a few minutes just for us, a favor from the ride jockey. We held hands and rode my deep, inchoate longing up and around and down and around. I could see into acres of darkness, the distant lights of a town
I had lived in all my life, the headlights of travelers going away. I gazed out at the dark world, at whatever came next.

When we are young (and for a long time after that), we may see the future, the only one that appears possible, and submit to it. To do so changes the present; it binds us. But if we are lucky, if we get the right guide, we see a future, many futures, and choose. We create one, and that changes the past. Everything that has been points to it—there, there—and nowhere else.

Our minds always move toward narrative, toward ourselves as omniscient narrators. Gradually we remember events as though we are outside watching, observing ourselves enacting the past. And these memories, from the observer’s perspective, become stronger than those in which we are centered. Research shows that emotion is no clue; real emotions are often tied to manifestly false memories. I may feel truly and remember falsely; I may change my memory to fit my feeling. Memory is betrayal.

But this is what happened.

He pulls me close, leans over, holds me with gentle, grimy hands: “Come with me.”

Old memories form the gestalt of a life—a life we observe, witnesses to our own architecture. People who are carefully tested over time simply do not remember their childhoods very accurately. (They absolutely insist that they do, even with the evidence of their mistakes in front of them.) People can be convinced of all kinds of falsehoods about their past: that they have had an accident or gotten lost or met a famous person or committed a crime. It is surprisingly easy to do this. Why shouldn’t I have come to believe these quotidian scenes of an ordinary fair?

No one else remembers this. There are no letters. No photos. No names.

The wheel turns on a narrow, sharp apex of time. I sense the inarticulate possibility of a life, and all at once I shiver, as though I have finally remembered something I knew long ago. Knocking the bottles over is more or less impossible. Life hurts, nothing is easy. But maybe life is possible anyway. Dangling, free, floating on a trembling cusp. Here is the offer: a life away from this suffocating town, this long tunnel.

I return. To ground, to work and home and school. As though it hasn’t happened. As though I have forgotten already. But I don’t forget. I unshackle myself that summer, that week. That night. I start writing my life. I can’t stop the itch; I have to go, but I can go on my own terms, with a plan. I keep my truce with my parents, barely, for two more years, and then leave, into whatever comes next, into the life I intend to make.

I cannot remember his name. Do I really ride with him into the night sky? I see us there, rocking. Does it matter? My memory is precise in every detail. This happens. This happens exactly this way. Because what happens is that I rise up high enough to see into the distance, into what could be. And when I step off with the slight stumble of the swinging seat, the way one always stumbles a little when crossing a rocky place, I am already there. Even if I never get on in the first place.

Sallie Tisdale is the author of several books, including Advice for Future Corpses, Stepping Westward, and the essay collection Violation. Her essays appear in a variety of publications.

HA!!! My older brother sees our childhood/ upbringing as something near idyllic. I remember it as oppressive and dysfunctional, ruled by a capricious and undiagnosed bipolar mother. So who is "right"? Of course, I am. And Of course, he is. Probably it was somewhere between. Yes, I hate to admit it, but Ms. Tisdale's piece has for me shed a powerful, ever useful perspective on my concept of the past and my memories. So incisive, so powerful, so humbling. I am indebted to her gifts.

This is absolutely gorgeous! Thank you for this gift.