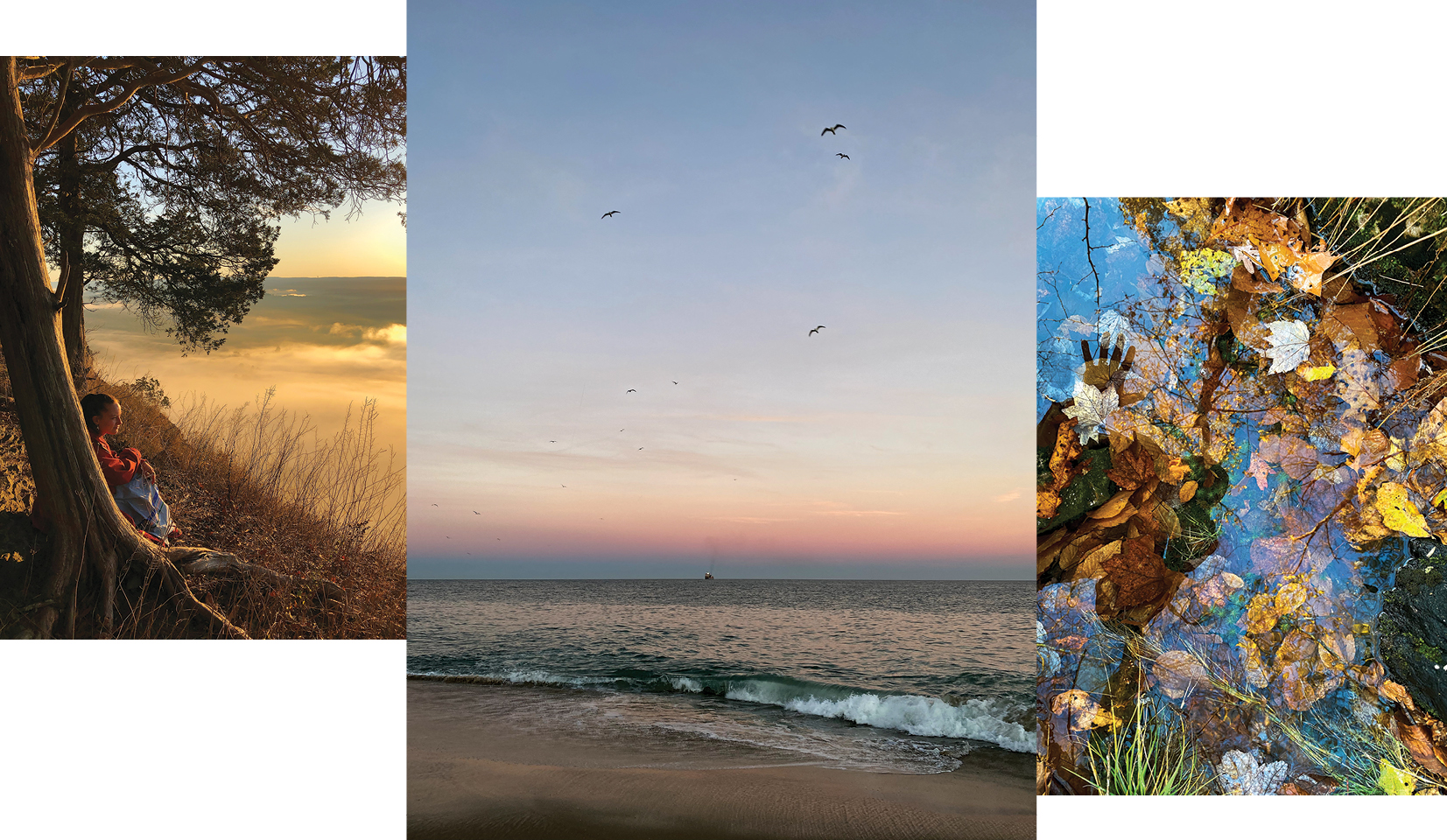 In 2019, my adult child, River, and I visited our Lenape tribal homeland together for the first time. We are enrolled citizens of the Caddo Nation of Oklahoma and descendants of the Delaware Nation of Oklahoma, one of three Lenape bands in the United States. Our Lenape ancestors and people were forced from our Eastern Woodlands homelands over two centuries ago and pushed halfway across the continent to Oklahoma, where my father was born. Like many Lenape’ok (Lenape people), we’d never had the opportunity to lay eyes on the homeland that holds the spirits of our ancestors, and the plant and animal nations that nourished our Lenape family for countless millennia.

Our Indigenous homelands are a central part of our identities and cultures. Epigenetic research shows that our relationships with our homeland ecologies are literally part of our DNA, as is the trauma of our separation from them. Living disconnected from our homelands feels like someone carved an empty space where an integral part of my existence used to be. This has affected every aspect of my life, including my artistic and storytelling practice.

The following words and images are memories from four trips to visit Lënapehòkink, our homeland. Having finally reconnected that dangling thread to its source, I feel as if I can start weaving back together some of what has unraveled within my family. I was finally able to begin to understand what it means to be remembered by the land as a Lenape person. My memories of the land are now part of the land, like the memories of my ancestors before me. 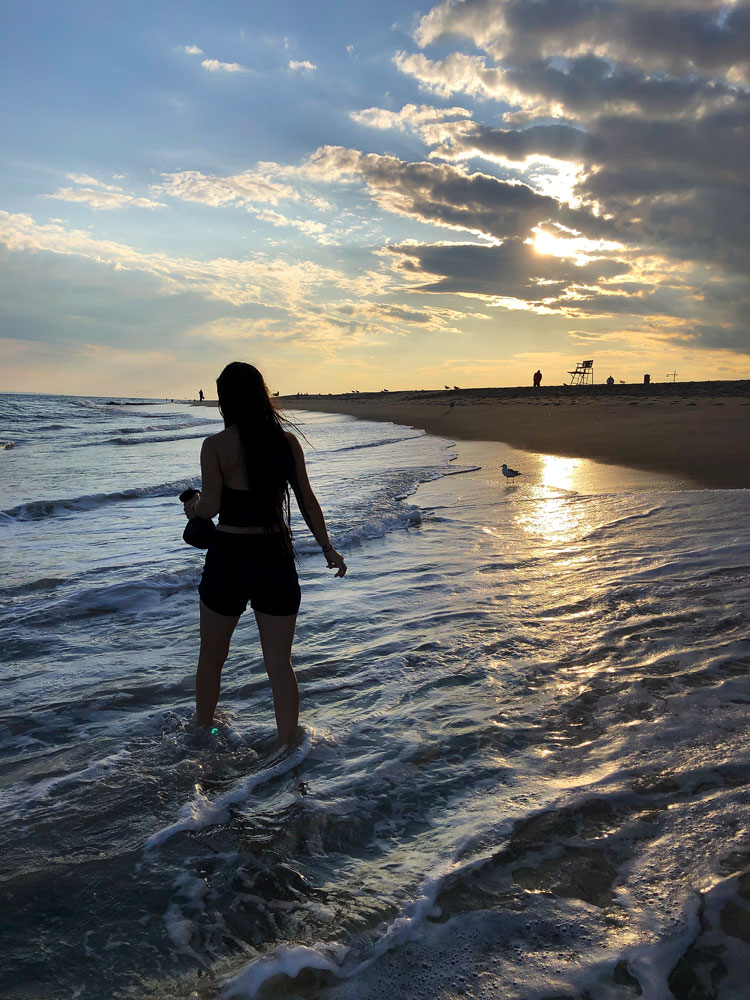 When River said, “Dad! Is this wampum?!” my thought was, “Nah, it wouldn’t just be right there in the surf. Like, it wouldn’t just exist out there in the open, where you can just gather it.” Wampum, purple pieces of quahog shell, is one of the most sacred representations of our Lenape culture and existence. The idea of gathering it where the waters that sustained our family for over ten thousand years meet the land that did the same was something I had only imagined. Looking down into River’s hands, I couldn’t believe my eyes. For the next hour we chased those purple shimmers around the surf, just as our ancestors’ feet and hands had done for countless millennia.

Our first trip to Lënapehòkink was just four days in Manahatta (New York City). All that concrete and asphalt made it hard for me to find my ancestors. Their voices were muted beneath the din and cacophony of colonialism. They were there, but I couldn’t hear them clearly until I reached this place called Rockaway Beach, named for the Rockaway band of Lenape’ok. After three days in the city, we knew we needed to see the kitihikan (ocean) before we left. Google Maps showed that Rockaway Beach was the closest access, so off we went. And there they were—our ancestors—singing in the surf we immediately jumped into, waiting for us these many long years. They wrapped their arms around us and gave us gifts of welcome. Wampum is a sacred representation of all that sustains us and of thousands upon thousands of years of Lenape’ok life woven into those lands and waters. I learned from an elder afterward that Rockaway was a historical wampum gathering place. 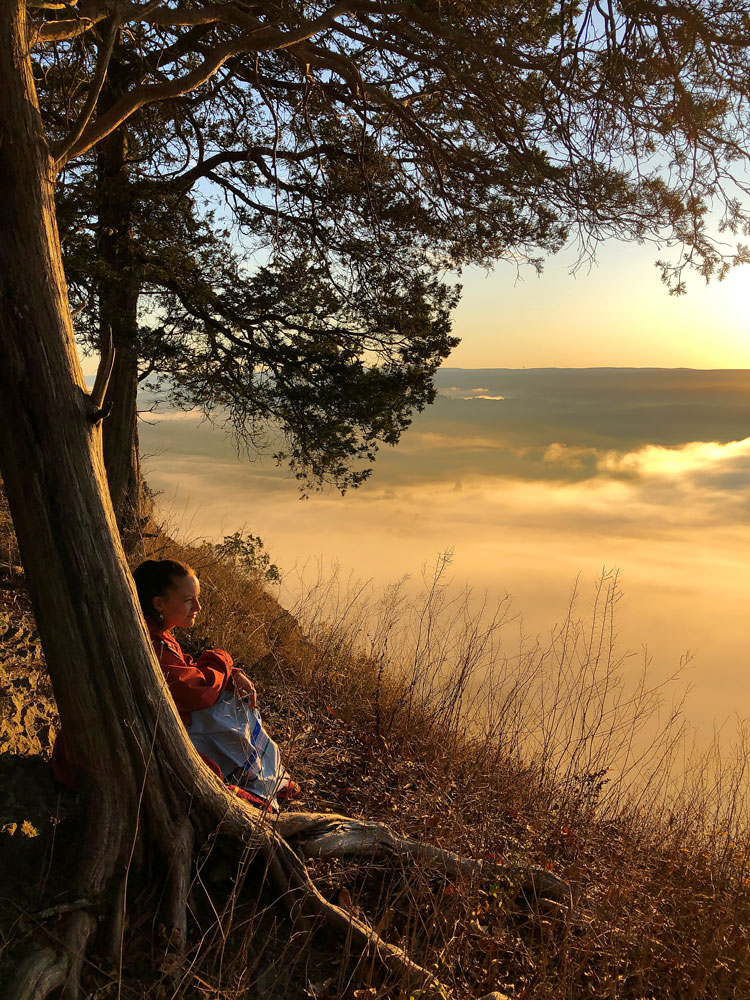 River looks over morning mist in the Delaware River Valley at the Delaware Water Gap National Recreation Area, shortly after a sunrise ceremony during our second visit to Lënapehòkink in 2019. The Delaware River, or Lenapei Sipu, is one of the reasons we exist today. For many Indigenous cultures, a specific watershed ecology makes up a core element of the community’s identity. Our related Lenape’ok peoples populated the regions around the Delaware from its headwaters to its mouth, as well as much of the lower section of its sister watershed, the so-called Hudson River. From the tops of the Appalachians to the waves of the Atlantic, the life of this ecology is the same as the blood in our Lenape’ok veins. Just downstream, only a few canoe paddles from this area, lies the Shawnee-Minisink Archaeological Site, the oldest known archaeological site on the Eastern Seaboard at over thirteen thousand years old. Archaeologists were surprised at the diversity of food, such as nuts, fruits, fish, and game, that our ancestors ate there not long after the last ice age. I wasn’t. The land is our family—of course it has always been bountiful. 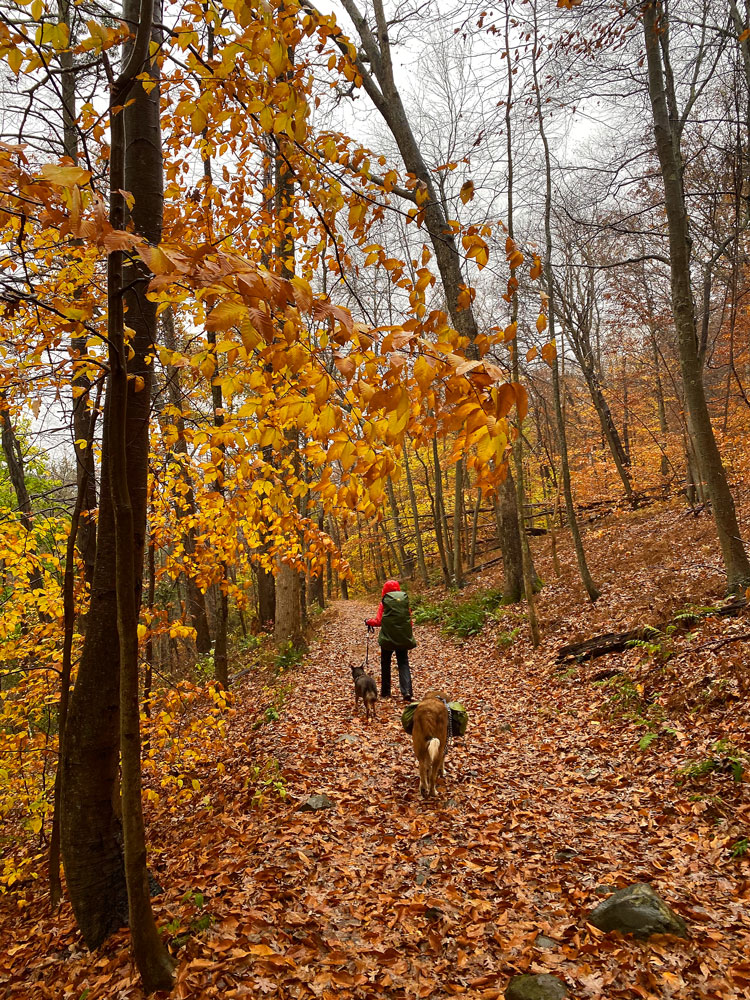 In the fall of 2020, after my oldest sister’s oldest daughter passed away unexpectedly, I returned to Lënapehòkink to begin hiking the Appalachian Trail as part of a long-term project to hike the length of my homelands, from Stockbridge, Massachusetts, through Pennsylvania. My Yup’ik friend Emily and her dog, Spicer, who live in New York City, came out to join my dog, Oli, and me to backpack a stretch of the trail in the Delaware Water Gap National Recreation Area. From there, I traveled to Stockbridge, where the northernmost band of our Munsee Lenape’ok community lived with our Mohican relatives in their homeland, the official starting point of our north-to-south journey. The night I arrived, about twenty minutes after I posted this photo of Emily and Spicer on Instagram, I received a call from my mother, who said that my brother had also passed away unexpectedly. For thirty years, he’d struggled with the mental and physical effects of his time as a combat marine in the Gulf War. We were blessed to have him as long as we did. 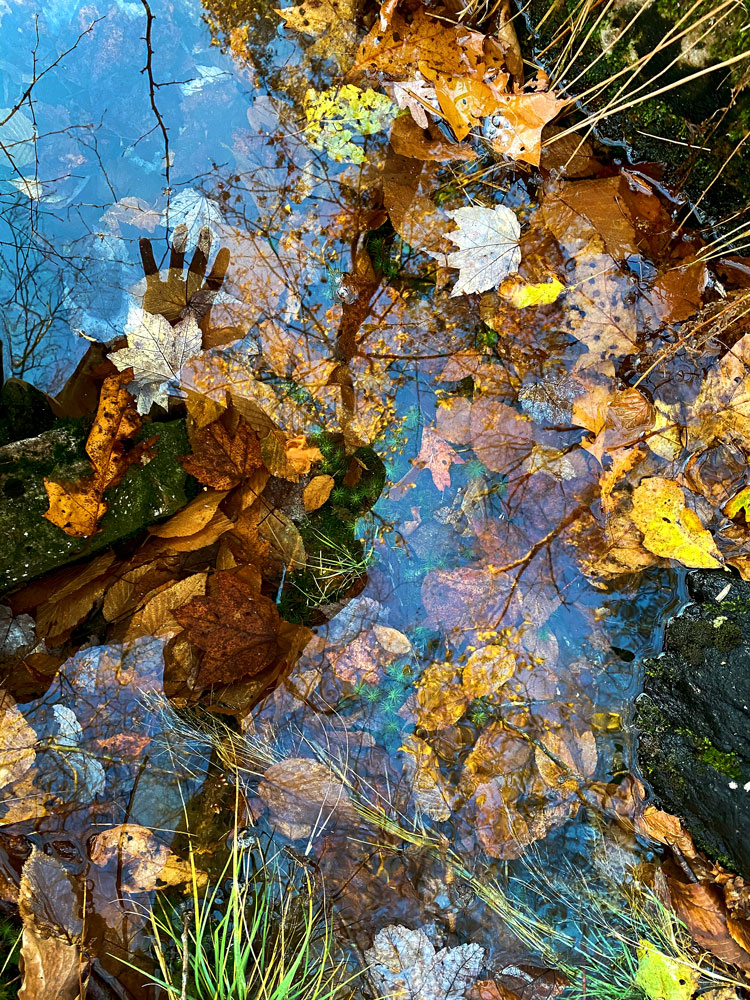 What started as a joyous journey to reconnect to a missing part of my identity became a journey to understand the depths of what trauma means. Because of epigenetics, I had to travel back to my tribal homeland to finally begin to understand trauma—my father’s, my family’s, and my own. I had to see what was torn from my identity so long ago; what was missing from the puzzle that is supposed to make me a whole, healthy Indigenous human being and Lenape man. If you put a puzzle together by beginning with the wrong piece in the starting point, it will never be right. I had to unpack all the pieces and start over in the right place.

By the time my father’s pieces were jammed into place, the puzzle was so askew he never even had the opportunity to see where it might have begun. He could only see the crooked, broken pieces around him and live within that context. Such is the way with trauma. It can become the starting point from which everything else is defined. And so he unintentionally helped set some of my brother’s pieces askew. As did many other events and happenings in my brother’s life, finally leading him into combat on the other side of the planet.

The last thing I heard from my brother was a comment on a photo I posted on Instagram from my journey home. He said the photo brought him “the feels back in the Plateau Homeland we are guests in.” I think I took my brother home with me in more ways than one. 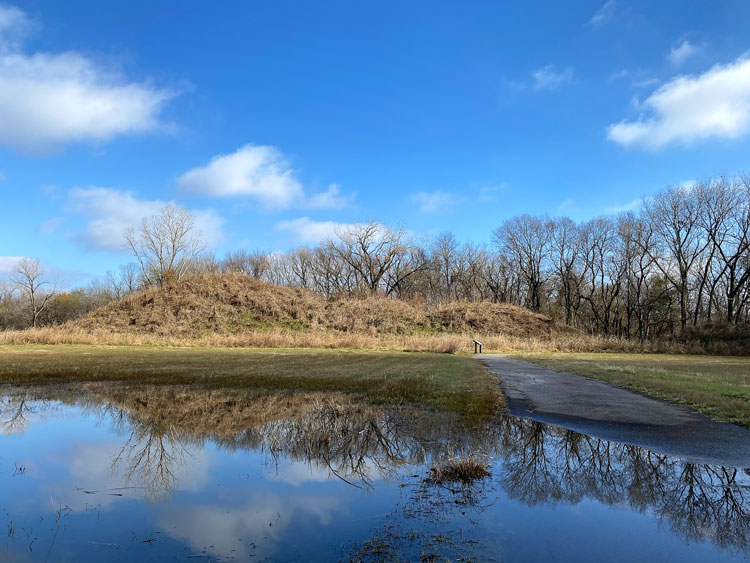 This grassy hillock is all that remains of one of the mounds at the Spiro Mounds Archaeological Center along the Arkansas River in Eastern Oklahoma, a place where our Caddo ancestors lived for thousands of years and built massive ceremonial mounds as part of the Caddoan Mississippian culture. The Spiro people created a sophisticated culture with an extensive trade network that stretched from coast to coast. They were skilled farmers and potters, and built huge mound complexes.

When I received the news that my brother had gone to join our ancestors, I was in our Lenape homelands, reconnecting with our Lenape’ok ancestors. It was good that I was there to include him in the ceremony I’d already planned for those of our family who’ve walked on. I cut my Appalachian Trail journey short and returned home for his services after that. Then I drove my child and their partner from Walla Walla back to their home in Santa Fe. I decided to go on to Oklahoma to visit our tribal land allotment and family burial grounds, and then on to our Caddo homeland to be able to honor my brother in the resting and living places of both his Caddo and Lenape ancestors. I’m glad I’ve been able to put so many prayers up for my family while connected to the land that sustained us for countless millennia. 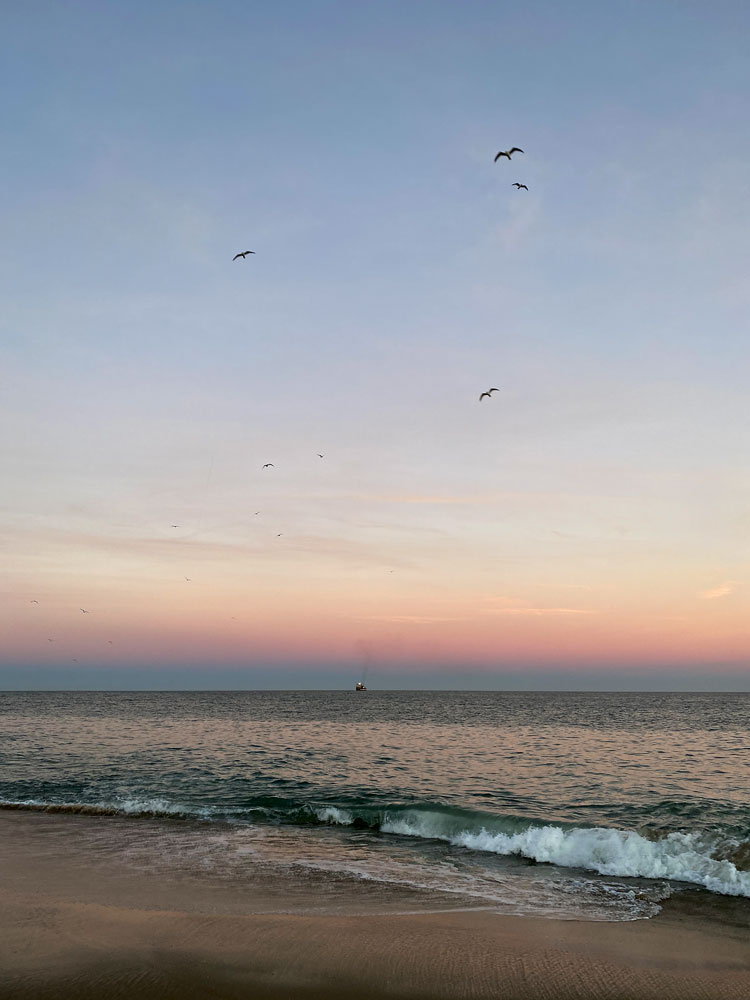 During the autumn of 2021 I returned for a fourth time to Lënapehòkink, this time with three other Lenape’ok to do a story for HuffPost about what it’s like to be tourists in our own homelands. When the reporting was done, I stayed in my homeland for an extra month to continue the reconnection journey I was on prior to my brother’s passing. Our traditional mourning time is a year, so it was good to return to the place I was at when he began his journey home to the same ancestors I was in Lënapehòkink to honor and connect with. We commemorate our loved ones with a ceremony after a year’s time. Part of what we’ve lost in our separation from our homelands is access to the medicine they offer for our healing journeys. For me, the entire journey was a ceremony for my brother.

My dog, Oli (short for Olamani, the red paint wolf clan of the Lenape people), and I traveled from the top of our homeland at the source of the Lenapei Sipu in New York’s Catskill Mountains to the Atlantic shores below its mouth in Delaware and Maryland. To travel the length of that sacred river that is central to our Lenape identity is to better understand my ancestors; I know that in doing so I continue to connect to my brother, who is becoming one of them. We spent Thanksgiving Day in Ocean City, Maryland, and the next day we gathered wampum at the Assateague Island National Seashore as our ancestors did before us. I felt my brother’s blessing and joy that our journey continues forward, tying our family back to the homelands that miss us as we miss them. I know that the medicine of his love for his family and people continues with us 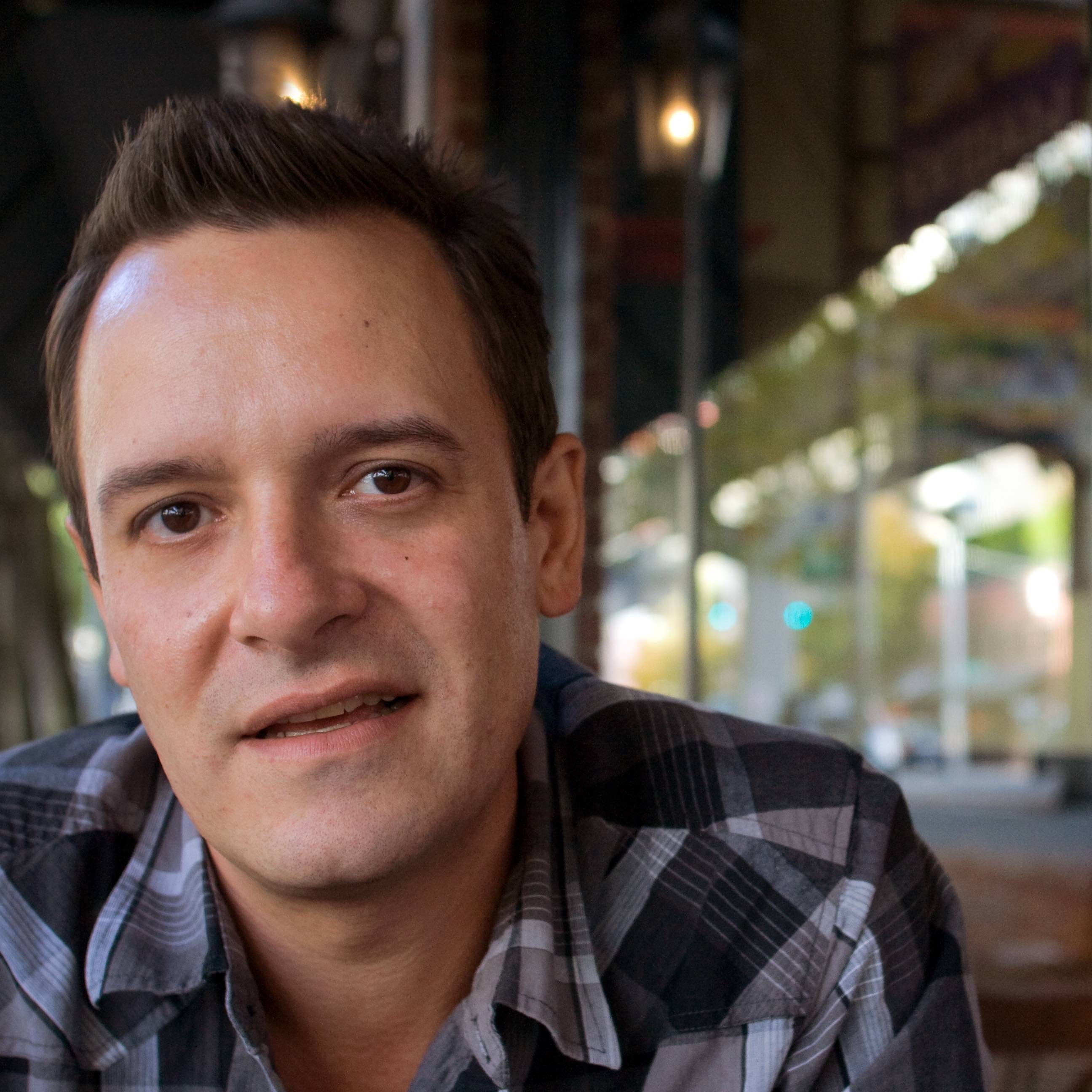 Born and raised in rural Wallowa County, Joe Whittle is an enrolled Caddo Nation tribal member and a person who has experienced the opportunity gap firsthand. He is a photographer and self-taught writer who has gained notoriety as a freelance journalist bringing Indigenous representation to outlets such as The Guardian, USA Today, Outside Magazine, High Country News, the New York Times, HuffPost, and many other publications. Learn more about his work at joewhittlephotography.com.

From the December 2022 O H news letter that came to me by email I stumbled on “I Remember the Land ….. “. and from there to the nature photos of Joe Whittle. Oh, my! What better way to wile away the morning of the first day of 2023?! What an amazing discovery, such a gift from the Wallowa territory. I will never forget the view from a Wallowa outlook over the homelands of the Nez Perce , a shiny ribbon of water winding through a green valley, imagining horses grazing where people lived in the land of their ancestors. A heart wrenching memorial. Thank you, Joe Whittle for sharing your art .❤️

Joe Whittle writes about the sacred ethics of Columbia River tribes and how they provide a guide for restoring ecosystems damaged by European colonization.

Photographer Joe Whittle explores how traditional practices of Native Americans of the Columbia Plateau strengthen communities and preserve connections to the land.

The Value of Your Story

Photographer Joe Whittle writes about his experience as a 2019–21 Fields Artist Fellow.