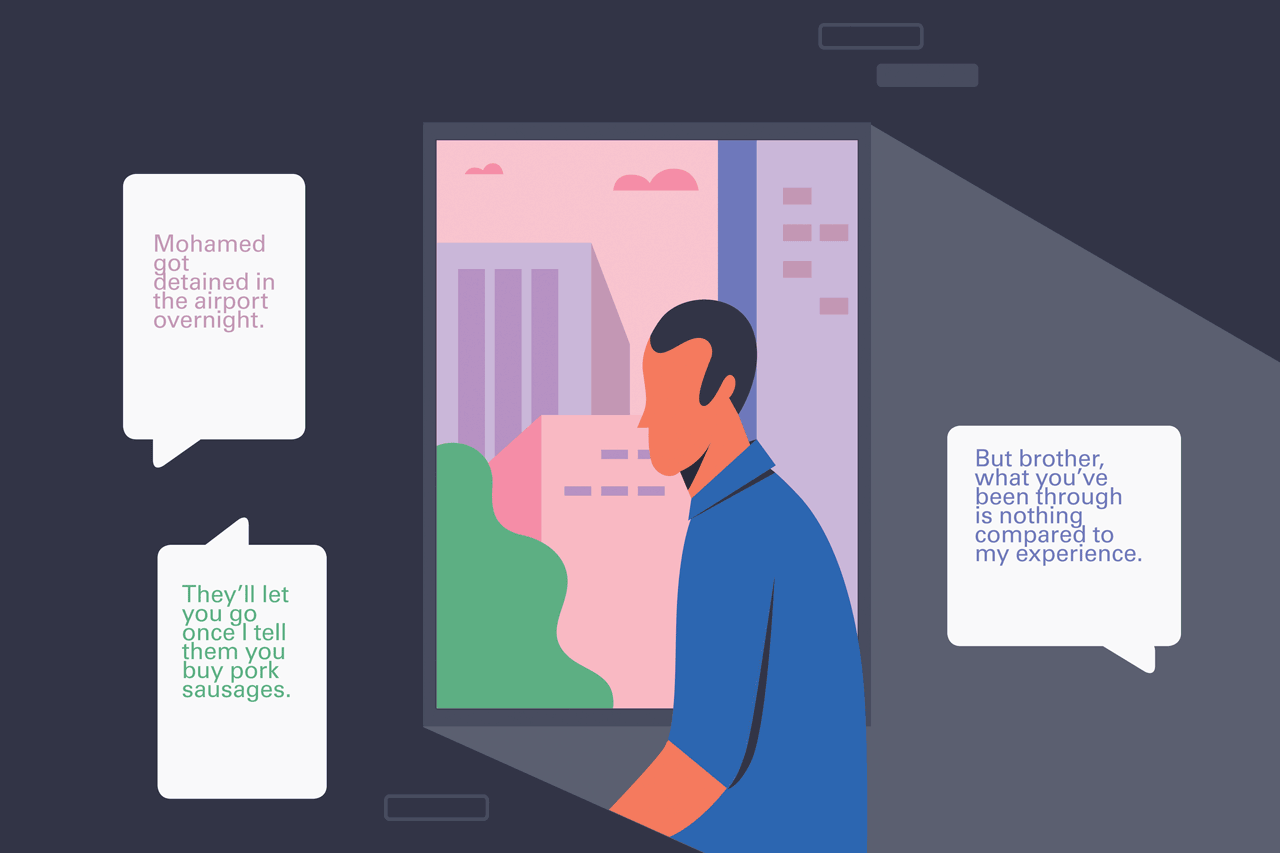 The following is an excerpt from Mohamed Asem’s new memoir, Stranger in the Pen, © 2018, in which the Portland writer recounts his experience of being detained overnight without cause by British immigration officers in 2016. Reprinted with the permission of Perfect Day Books

The butcher shop was on Blackstock Road, one of the main thoroughfares in Islington. That busy street lay east of my place and had a colorful, contrasting character: shabby, densely populated, and more ethnically diverse on one end, spacious and gentrified on the other. I left the stadium from the eastern gate, walked down Avenell Road, then turned on Gillespie Road where, facing each other across the street, were two long rows of identical brick homes, one-story residences with checkered mosaic tiles decorating the walkways. As usual, a large grill stood outside the Jamaican take-out place at the end of Gillespie Road, sending fumes all over the place. Passing through the aromatic haze, I arrived at Blackstock Road. Vehicles rumbled up and down the street, scruffy characters sat outside greasy spoons, chic young people strolled about, and couples pushed their strollers this way and that. The butcher was across the street, sandwiched between a pharmacist and a café that was packed from morning to night with men who, judging from their accents, came from North Africa.

When I entered the shop, I saw the butcher moving about in the walk-in. “Good morning,” I called out.

His thin fingers slid between the clear plastic sheets hanging down the entrance to the walk-in. Parting them, he emerged, dressed in a white coat over a blue shirt. He was slim, middle-aged, with thin white hair combed to the side and an easy smile.

“Hello, stranger,” he said, gliding to the front of the shop. Between us was a glass case that displayed a variety of sausages. “Been a while,” he said. “What mischief have you been up to this time?”

I shook my head. “If only that were the explanation.”

He frowned and seemed to be waiting for me to elaborate. Since I had opened a door with my comment, I felt compelled to tell him about what had happened. The butcher listened in silence, furrowing his brow as I worked my way through the story. “I suppose they’re being extra careful after what happened in Nice,” he said when I finished. “Terrible, that. Awful.”

His wife, also dressed in a white coat, joined us, carrying two large mugs of tea. “What’s awful?” she inquired.

I was about to answer her when a woman entered the store and stood next to me, waiting her turn.

“Mohamed got detained in the airport overnight,” said the butcher, taking a mug from his wife.

“Goodness. Why?” she said, shifting her eyes between me and her husband.

“Is it because of the attack in Nice?” asked the lady next to me. “I just couldn’t believe it: a person—a human being, someone like us—plowing a truck into a crowd—men, women, and children.” She paused, her eyes widening, then resumed speaking in a loud, resonant voice. “We’re lucky nothing like that has happened here, but, realistically, for how long, you know. I mean it’s only a matter of time before one of them . . . I don’t want to think about it. I don’t. But, realistically . . .”

I almost sympathized with her. The people she referred to were murderers and I was just as afraid of them as she was. But I was put off by what she had said. In her fear and paranoia I heard an excuse for my detainment. She might as well have turned to me and said, “Well, you could be one of them.”

The butcher sipped from his mug, then gestured at me with it as if he were giving a toast. “Next time, you tell them to call me,” he said. “They’ll let you go once I tell them you buy pork sausages.”

His wife gave him a soft slap on the arm and tried to hold back her laughter.

After buying different cuts of meat, I continued south on Blackstock Road, passing shops selling secondhand furniture, a florist, a dive bar, and several convenience stores until I reached my grocer, near the top of a small hill.

Inside, Tarek was stocking cases with vegetables and fruits. He was in his forties, gaunt, with a wide face and short hair that sat flat on his head. I found him pleasant to talk to even though he had the awkward habit of asking intrusive questions, a conversational tactic reminiscent of the kind of grilling I faced at home.

“How have you been?” I said in Arabic.

“Too busy. But all is well, thank God. I haven’t seen you in a couple of weeks. Where have you been? Traveling again?”

“This time for a wedding.”

“Eh! A wedding? Yours?” His mouth split open in a big smile that revealed crooked teeth.

I laughed, shook my head. He slapped his hand into mine.

“I’m serious, man, find yourself a wife—settle down. It’s good for your peace of mind. What, you think I’m joking?”

“I think you need to ring up that customer.”

Tarek looked over his shoulder towards the cash register at the back of the shop.

“Coming!” he said in a heavily accented English.

My basket was half-full when Tarek joined me again by the display of organic produce in the middle of the shop.

“Listen. I understand why you like to be alone,” he said. “A few days ago, my wife’s uncle, his wife, and children left for Lampedusa. We still haven’t heard from them.”

“She was orphaned as a child, my wife. After her parents died in a fire, she went to live with her uncle, who raised her like she was his own daughter. We pray to God for the best. What else can we do? But brother . . . I work twelve hours a day—from eight in the morning to eight at night—and six days a week. I swear to God, after work, when I’m home, all I want to do is eat and sleep. But how, when every night my wife cries and spends hours on Skype and WhatsApp calling everyone she knows to ask about her family? That’s marriage: her life is my life, everything she goes through I go through.”

We walked to the register. I placed my basket on the counter and Tarek started ringing me up. “So you’d prefer to be alone?” I asked him.

“Sometimes,” he said, nodding, “but then I remember that year when I lived alone in London and feel grateful to be married. What? You think it’s strange? Back home, in Syria, I’ve always been around people—you know how it is: we are a social people. If you’re alone, then there’s something wrong with you. The first time I’d ever been alone was in London, at thirty-eight years old. Waking up in this strange city where the streets, buildings, trees, and the air are completely different. I mean, even when surrounded by people, I still felt alone. I don’t know how I survived that year—I was beyond depressed. I wanted my country, my people.”

“I understand,” I said. I inserted my bank card into the point-of-sale machine.

“Do you?” he said and laughed. “You lived in France, Kuwait, and I don’t know where else; you traveled all around the world—for you, foreign is normal!” Tarek suddenly turned serious. “Eh, tell me, did you have any problems coming into the UK because of what happened in France? Did they stop you because of your name?”

Again, I obliged his curiosity with yet another—even more condensed—version of what had happened.

At the end of my story, Tarek became uncharacteristically tight-lipped as he folded his hands on the counter and looked out the front window. A red double-decker bus drove by. On its side, a white banner advertised The Book of Mormon.

“The minds of those people are sick,” he said. “And who suffers because of the things they do? People like us: honest people who have nothing in common with them or their sickness. But because they call themselves Muslims and we are Arabs, so Muslims, people see us as one and the same.”

I lifted my shopping bag from the counter and set it on the ground next to me.

“I’m sorry for you,” he said, “but brother, what you’ve been through is nothing compared to my experience. I swear to God, my story will make you cry.” Tarek clicked his tongue and shook his head. “Even with all the fighting, I did not want to leave my home. Besides, where could I go? If I run away to Damascus, or some other part of Syria, then people will think I’m either a rebel or a traitor. And forget about escaping to another Arab country—you know how things are back where we come from: to each his own. No, better I stay, help my people and family. But one day, there was so much fighting that it was like the world exploded a hundred times over.” He paused, pointed his chin at me. “Have you been to a forest?”

“I’ve only seen forests on TV: so much greenery and incredible creatures, so much rain. Praise be to God. That day, listening to the sound of bombs, I tried to pretend it was rain in a forest. I was sure none of us would make it. But when the fighting ended, we were still alive, holed up in a basement.” He glanced out the front window, then faced me again. “I was a mechanic, you know. I owned a garage. Business was good—I earned enough money to support myself and my parents. Then the fighting started.” He sighed deeply. “I have a relative in London. Thanks to her, I could come here and support my parents and family there, in Syria. But you think those border officials showed me—someone who escaped a war zone, has seen his home destroyed and his people killed—any sympathy? They treated me like a criminal, as if I came here to take something from them.”

“How did you react?” I said, thinking about my behavior the other night.

Tarek shrugged. “Nothing. I did nothing. I was afraid they’d send me back to Syria if I provoked them. It was humiliating. But inside, I wanted to scream: keep your fucking social benefits and citizenship—I don’t want them. All I ask is for the right to work and live my life in peace and dignity. You understand? Peace and dignity.”

A young man with a thick beard and a head full of wavy hair pushed a pram inside the store.

“Hello,” Tarek greeted the customer. He turned his attention back to me. “I gave you a headache, right?”

He slapped his hand into mine. “You’re a writer, man. This should be interesting to you.”

Mohamed Asem is the author of Stranger in the Pen, which was published in October 2018 by Portland-based Perfect Day Publishing. Asem’s work has appeared in Eunoia Review, the anthology What Lies Beneath, and elsewhere. Born in California, raised in Kuwait and Paris, he currently lives in Portland.