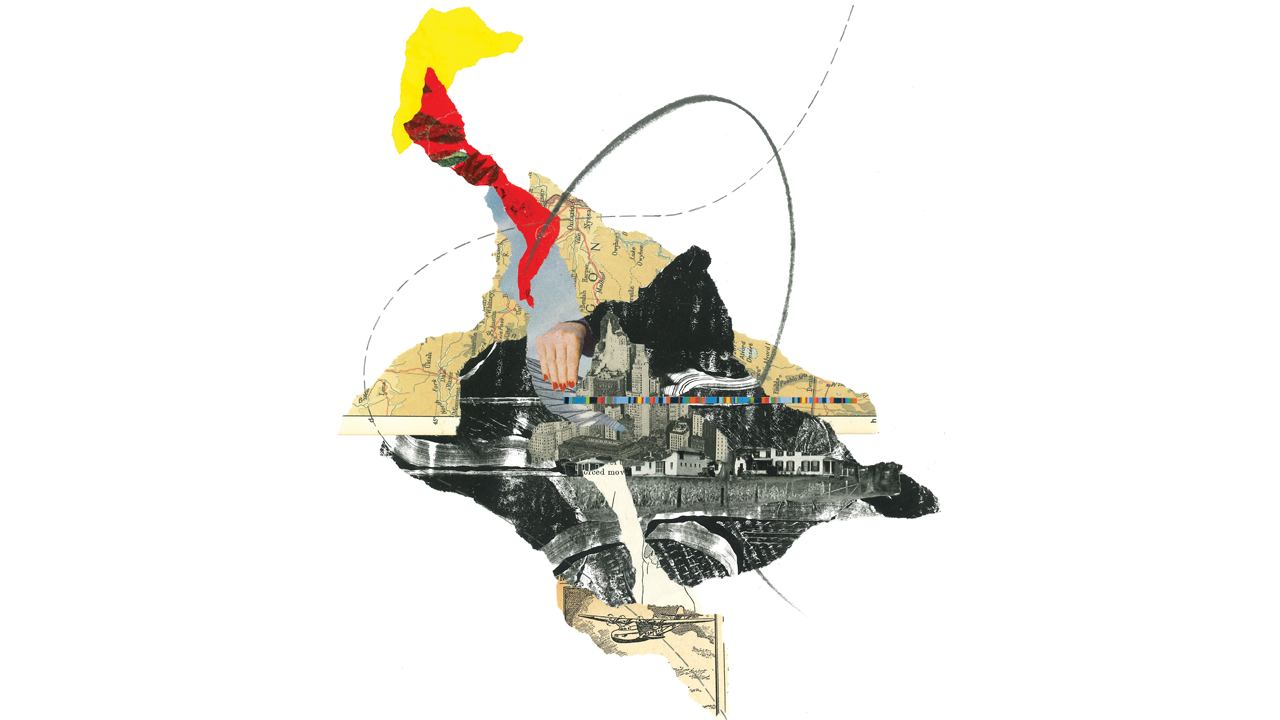 In April 2010, my parents, my younger sister, and I packed our entire lives into eight suitcases and left our village of Cu Chi, Vietnam, to come to the United States. Before then, all I had known of the country were images of cousins who had preceded us: raised on Western diets, wearing name-brand clothes and designer jewelry, and smelling of Chanel No. 5.

My father was a diesel mechanic. My mother was an entrepreneur. My younger sister was a rising middle-school student, and I had recently completed an undergraduate degree in international law. We had no idea, as we crammed our lives into our luggage, that carving out a new life in the United States would also require stowing these identities behind accommodating smiles.

We landed at SeaTac airport and were quickly herded through the maze of immigration checkpoints with our belongings in tow. It felt like a lifetime, crawling through masses of people and deciphering sounds that we had heard tourists using in the lives we’d left behind mere hours ago. After two hours, we all breathed a deep sigh of relief and crowded into an elevator that took us from the belly of SeaTac to meet our awaiting family in the United States.

The elevator slumped to a halt. A sharp tone rang, and the heavy metal doors slid open to laughter, tears, and the shrieks of my aunts, uncles, and cousins. Our eyes burned from the sleepless hours of anxiety on the flight and the unburdening of our family’s eighteen-year separation. But the reunion was soon cut short as Uncle Tam rushed us to his van.

My dad looked out the windows at the silhouettes of parked cars surrounding SeaTac in an industrial queue. “This must be an automotive plant,” he said. “I’ve never seen so many cars in one place before, Tam.” Uncle Tam chuckled and said, “No, Anh, that is just a parking lot. They don’t produce cars in Seattle.”

“Where are we going, Uncle?” I asked Uncle Tam.

In my dream of America, I thought I would be starting my new life against the backdrop of the Seattle skyline, posing in front of the Space Needle under a rainbow. Instead, I got miles of potatoes and onions, the ever-present smell of dog food being processed, and months of dry desert air.

After the excitement of the journey faded and fatigue slowly turned to reality, I woke up crying. I sensed my sister crying too. I reached out to her and murmured, “I miss our home already.” Kim clenched my hand, and I felt her fingers shuddering between mine. We did not want to appear ungrateful or scared, but I sensed pangs of anxiety and anticipation in my belly. The van kept floating through the night. The van had its direction, but at that moment I didn’t.

As we settled into Hermiston, we were shuffled between the homes of my three sets of aunts and uncles. My parents, with their limited English, found work as night custodians for a big-box retailer. They came home each morning to make my younger sister breakfast and send her to school before slumping over, hunchbacked, to sleep side by side on a twin mattress. In Vietnam, my parents laughed from their bellies and smiled with joy; in the US, they smiled at racist slurs that they did not understand and hid their laughter until they were in the safety of family. Those first three years in Oregon were the hardest of my life. In Vietnam, I had been on track to take my national exams to become a lawyer, and now I found myself being scrutinized by my aunts for dreaming too big.

“Don’t you think twenty-two years old is too late to start college again? Stop being selfish—you should go to work and help your parents to pay bills.”

“Your English is really bad. You won’t be able to get an office job with an accent like that.”

For years, I carried the weight of their internalized racism as a marker of their survival. Their circumstances did not allow them the freedom to stretch beyond their day-to-day lives. Eighteen years of living on the margins had limited their sense of what was possible. They bitterly swallowed the sexually loaded racism they encountered each day in hopes of providing comfort and future opportunities for their children. I was angry at my aunts for their short-sighted judgment; I was angry at how we had to survive.

Hundreds of miles of underground tunnels exist throughout Vietnam, vestiges of the wars against France in the 1940s and the United States in the 1960s, as well as clashes against the Chinese thousands of years prior. These tunnels served as underground listening posts, sites of food storage, headquarters, hospitals, hostels, and highways for soldiers and villagers caught in military conflicts. The Cu Chi tunnel system protected my family from gunfire, bombs, and gas attacks during the French and American wars. Hunched over in spaces barely four feet high, my family found solace and safety. Living below the surface has allowed my family and my ancestors to survive. The scents of war, famine, and trauma were passed on to my sister and me.

After the fall of Saigon in 1975, hundreds of thousands of Vietnamese fled their homes to find asylum in the United States, Canada, the United Kingdom, France, and Australia. There are around 2.2 million people of Vietnamese descent living in the US today. As of 2021, nearly 50 percent of all nail salons in the country were owned and operated by Vietnamese immigrants. One of them belongs to my aunt Hein.

Every Vietnamese nail salon owner can trace their professional lineage back to Tippi Hedren, the inadvertent godmother of the Vietnamese nail industry. Hedren, a model turned actress who starred in The Birds, served as a relief coordinator in refugee camps outside of Sacramento, California, in 1975. She learned that the women there were intrigued by her manicured nails, so she hired her manicurist to train them and coordinated with local beauty colleges to place them in jobs. As a result, Hedren helped to empower generations of Vietnamese refugees and immigrants.

It was in Aunt Hein’s salon that I took my first paying job in the United States. It was humbling work, the only work that I could find with my limited English and even more limited social network to open doors for me as an immigrant. But I was grateful to work. I knew that, with each hour, I was working to move my parents, my sister, and myself into a home of our own. My sister and I would ride bicycles through Hermiston’s subdevelopments and dream about what it would be like to open our own front door and sit as a family around our own kitchen table. Months passed, and I began to realize that as a licensed nail technician, I could begin to climb out of the situational poverty we endured: Time is money, and I have bills to pay.

Hunched over, filing nails and inhaling chemicals, I worked on the hands and feet of countless clients to pay for my tui-
tion and my family’s living expenses. Working on commission, a $30 treatment meant $10 toward what we needed to rent our own apartment. With a ten-hour shift, I could bring home $100 a day.

I didn’t leave Vietnam just to work for my family, so I returned to school. My four-year degree in international law from Vietnam was neatly packaged into just over two years of transferable community college credits: my native understanding of Vietnamese replaced two years of a foreign-language requirement, and the college registrar deemed my four years spent studying legal documentation sufficient to demonstrate mastery of MLA citations. I taught myself English as I worked and conversed with clients, new friends, and professors. I somehow balanced working a sixty-hour week with being a full-time student. An essay that would take a native English speaker fifteen hours to write took me sixty. I completed my undergraduate degree in accounting in less than three years, and soon after, I stopped working for my family to pursue a career in finance and wealth management.

For a long time, I felt like I lived underground, unseen and disconnected from the communities that I lived in, and even from my own family. Watching my friends in Vietnam begin their professional lives and start families while I gave manicures and pedicures, I wondered if I should have stayed. But now, after twelve years in the United States, I am living outside of the shadows. My family has bought a home in which they laugh, speak loudly, and smile without hesitation. I watch my parents stretch up to the sun as they work in their garden and harvest vegetables native to Vietnam. On some early summer mornings when I visit my parents, I see my mom in the garden and cannot tell if we are in Hermiston or Cu Chi. My parents hope to move back to their home in Vietnam, and my sister plans to return with them, to reestablish herself in a life that she left behind; she will take her degree in hospitality management to the growing travel industry surrounding Ho Chi Minh City. My husband and I own our own home in Eugene, where we try to leave our generational traumas and the burdens of our professional lives at the doorstep. My family is now able to live our lives aboveground.

Want to explore this story further?

View our discussion guide to find questions and prompts as well as links to related articles, books, websites, and more.

thank you for this story.

A two-week journey toward hope and home. By Vicente Martinez.

From the Director: Grounding

“My Heart Belongs Where the Trees Are”

The Toxins Beneath Us

“We Are the Original Conservationists”