The fire took our home and all our possessions, but some things can’t be burned away. 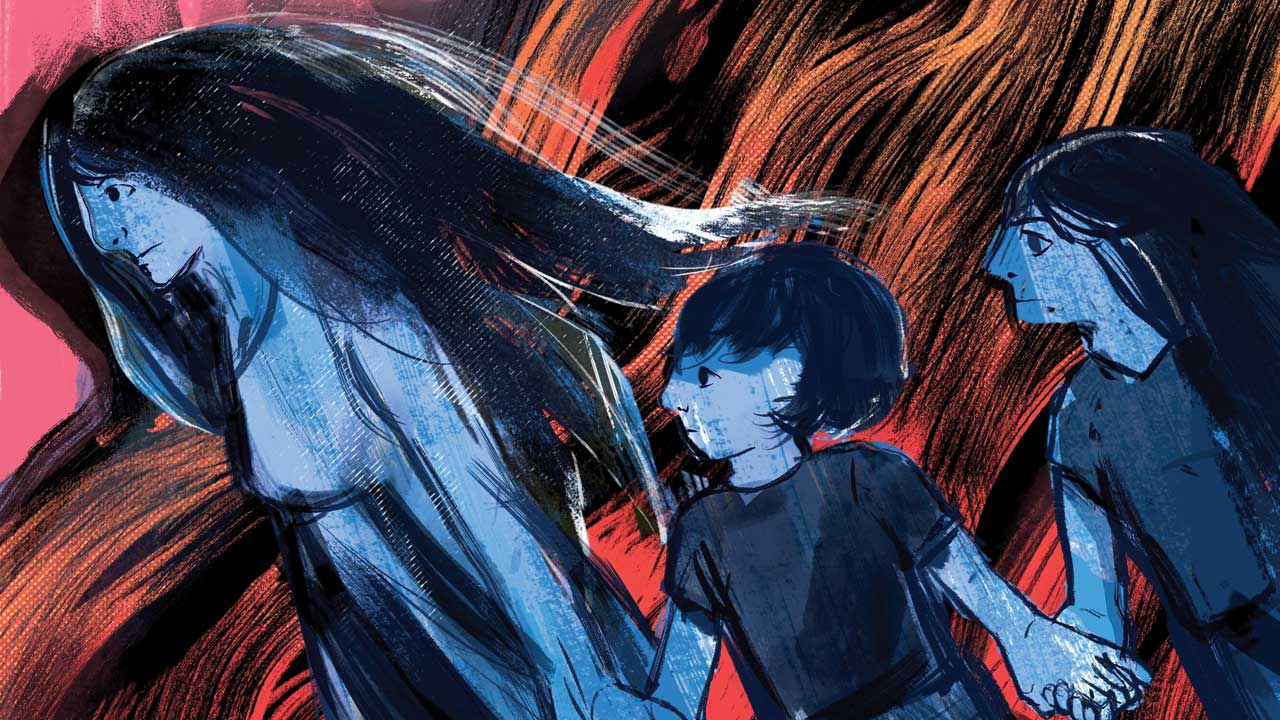 On the morning of the day we fled for our lives, we piled some of the things we cared about the most on the front porch of our mobile home. The wood box my late father made for me after my son Dylan died, the black Stetson my husband’s grandfather cherished, the turquoise backpack I took to Australia with our daughter in May of the previous year. And then, as we had to run out the front door, I hurried past all of it. The only coherent thought in my head was that I needed to get my daughters to safety while our neighborhood burned around us. The only thing I managed to carry was a small wooden box that held our passports, birth certificates, and some cash.

We raced down the grassy hill behind our house toward the parking lot, where several neighbors had gathered and a state trooper was getting out of his cruiser. The wind was fierce and warm. Ashes were falling from the sky.

I ran to the trooper, trying to be calm. I said, “My kids and I have no transportation. Where should we go?” The fire was traveling north, and there’s only one road out of the mobile home park, just north of Ashland. We were standing at a dead end. He looked at us and said, “You’re in the only green area I see. Stay right there.”

Within minutes, he told the neighbors to get into their vehicles. “No matter what you see or what happens, keep going. Do not stop. You will follow me, and we’ll caravan out together.” My elderly neighbor welcomed the girls and me to join her, and we piled into her back seat. A minute later the officer called us back outside. “There’s been a change of plans,” he said. “You’ll all have to walk out of here.” He waved in the direction of the path that hugged Bear Creek, a path that wound down and around to the third loop of the park. A group of us began walking. When we reached the end of the path, we could go toward the creek, or walk up the road, toward a field. We opted to walk south, toward the field.

We kept masks against our faces as dark smoke filled our lungs. We were walking against the wind, and at times we flipped our bodies around to catch a breath of cleaner air. Some of the mobile homes we passed were already catching fire. The field, which had been dry and overgrown the morning of the fire, was still smoldering in places, but it was the safest place to stand while fire burned in every direction. Days later, we would begin to understand the enormity of the situation, the thousands of homes and hundreds of businesses lost in the Rogue Valley from the Almeda and Obenchain fires, but for that moment, although most of our mobile home park was enveloped in thick smoke and ash, our homes were still standing.

A few weeks after our home burned down and we lost everything we owned, we walked through the rubble of the mobile home park, searching for missing cats. My husband, Jason, and I went back twice a day for months, hiking the grounds and calling out for survivors. One of our cats had been pulled out of the park the morning after the fire, scooped up by a Good Samaritan and taken to a local animal hospital, where he spent about a month being treated for third-degree burns on his paws and face. Our oldest cat, Fat Boy, hid in the rubble for five long days until we finally caught a glimpse of his matted fur. I sat down in the ashes and talked to him for about ninety minutes before he finally recognized us. Somehow he was unhurt, apart from the trauma that he absorbed over those long days. Our third cat, Max, is still missing, and our pet ferrets perished in the fire.

I was checking one of the cat food stations on the south end of the park when I came around a corner and found myself facing a huge propane tank. It was the spot we were evacuated from on the day of the fire. In that moment it was September 8 all over again. I could feel the terror and smell the smoke, and the wind whipping through carried messages of warning. I stood there, frozen, filled with panic, tears falling down my face. All around me were jagged pieces of crushed, rusted metal, fragments of our homes—the antithesis of their former structures, houses that held the hopes and dreams, the pasts and futures of my hardworking neighbors. The wind did little to dry my tears.

This lifetime brings many illusions. When we signed the lease to our home, we thought we would live there indefinitely. Now, all that remains of our porch are the skeleton of what once was a blue hand truck; some twisted metal that was once a bistro table and chairs; ashes; and dirt. The little pile of sympathy cards that friends and family sent after Dylan died, that I kept bundled in a blue ribbon, all gone. The bag that held his curls, evaporated. His blankets and a tiny onesie that held colorful baby-sized handprints are no more. I once thought these sacred items were my own personal gravity, my balance. Now I must exist without them. We lost so much that day: our home, our sense of trust in the public safety system that failed to notify us that we were in danger, and much of our past. Family history that can’t be re-created. Pieces of our lives that we weren’t able to carry out of the fire.

What’s left is the realization that the things we think we own are fleeting at best. Some possessions, the sacred ones like Dylan’s box and that beautiful Stetson, are held onto by something that can’t dissipate, even in the wake of disaster. Love hangs on, our memories linger. In the end, I believe that’s the best we have.

I, too, lost my home and absolutely everything I owned. I was visiting my mother in California. I was unable to gather anything...and replacing all of my documents became an exhaustive...painful ongoing trial. But...no...I am not faced with agonizing memories of flames...only what I watched on my phone all that night long...after my son called to tell me my home was burning. I do not have those nightmares...but I have utter loss and a deep sense of losing myself and who I was.

I have not yet had this experience, though I have been just over a mile from an evacuation zone twice. As I wonder whether it is not a matter of if, but when, I am learning to understand that every Thing I own will always be part of me in my memories. My children are safe, I have people who love me and, in the meantime, I'm grateful every year for all that I have been given in this life Peace