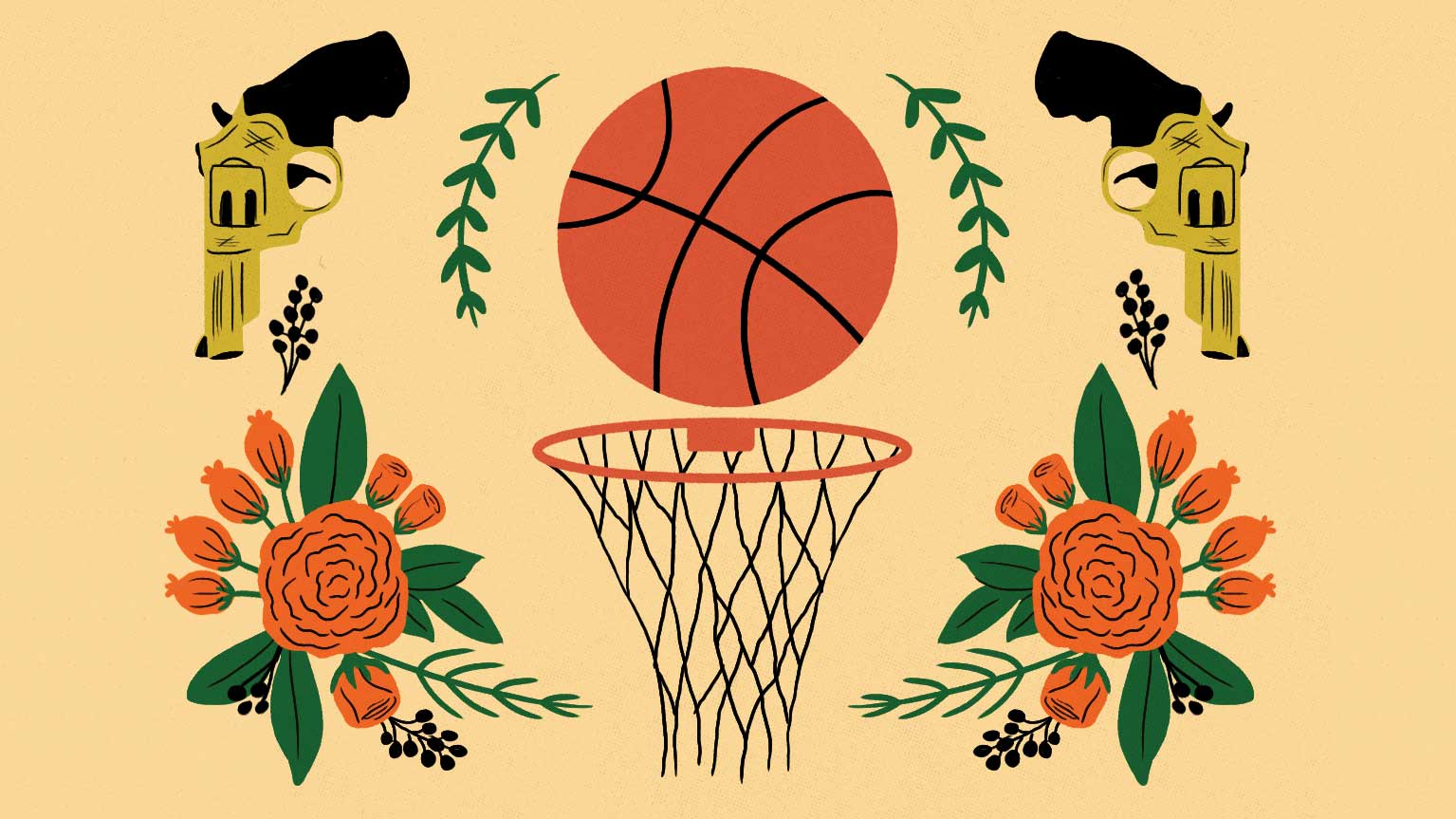 It means hoop dreams born during your Biddy Ball days (you played for Dishman or ASP, or else you wasn't as cold as you thought you was) that flame out all too soon. It means if you keep the hope flickering long enough, you play spring tournaments held hours elsewhere and spend whole summers practicing in Irving Park.

What it means to say Portland is, at some point, spending part of your year working with at-risk youth—or all of it being one.

My city. It has meant a decades-long love affair with colors: red and blue. It means prep games with the air fragrant with dollar popcorn and the eerie presence of gang task force guarding the exits. What it means to say my city is the word rose: the Rose Garden, the Rose Quarter, the City of Roses, rosebushes in the yards of homes in the West Hills, in neighborhoods where they build a new Street of Dreams every year.

A street, that is, for someone else's dreams.

What it means to say my city is yes, you dream, but small, realistic.

The Town. The Town. When those young dreams desert you, you take up pimping and pandering or selling dope, or if you're bold, taking by force things that don't belong to you. What it means to say Portland is that, if you're one of those dudes, sometime in your late teens or twenties you move to Vegas, hustle a new ride, and drive all the way home with the butt-naked ambition of being the cynosure, of being, for an afternoon at least, the axis of it all. In my city, dudes who stay local, dudes with aspirations average as fill-in-the-blank, plus abandoned faith, those guys push wheels made a generation ago: restored American-mades with custom systems, exotic paint, and wire rims with too many spokes to count.

In '88, what it meant to say my city was a collective awe at our inaugural drive-by murder (RIP Ray Ray).

If you're from The Town, it could mean get back against a second cousin or an old elementary school friend.

Nah, that's what it meant to say the Rose City. I've been away some years. It damn well may be another kind of city.

When you're gone, you see how much your city changes.

What it meant to say Portland, Northeast Portland, The Town, was copping a bag from your big homie, a precooked and acetone-cut underweighed baggie, and standing on a street your mom warned you away from: Failing or Going or Gantenbein or Skidmore or Mallory or Rodney or Church or Roselawn, corners where young boys whose quivering flames were soused anytime before yours carried stolen straps and a heavy grudge against the globe. My city, what it meant was you posted on a hot block all night for almost nothing, only half of which (if you were lucky) was yours to keep.

Being from The Town meant feeling as though you'd toured every grade school known to man: King and Sabin and Irvington and Faubion and Boise-Eliot and Vernon, not because you wanted to, but because there was always something or other that some months made the rent unbearable for whomever. It meant riding a TriMet bus to and from those schools, and later to various middle schools, and afterward to a few high schools. It meant standing at an uncovered bus stop on an ultra-drenched day with the frail hope somebody you knew would ride by and swoop (good lookin', Cool Nutz).

What it means to say my city is an entry-level gig at Nike, Adidas, or Intel, or for the few and proud, landing a damn good job with the state.

If you're from The Town, you might've marched on behalf of a beach blast, but for all your life attending a rally in Pioneer Courthouse Square was out of the question.

This city, this city—it has meant an ambivalent belief in the Blazers and, for a multitude, zero faith in much else.

For too many or maybe too few, what it has meant to say The Town is our oh-so-lovely Measure 11 minimums. It has meant there's a good chance you can find who you been searching for in the justice center if for months you ain't seen them on the streets.

What it means to say my city is if you dream, but small and realistic; if you toured, or felt you did, most of the schools in the city; if you mashed on somebody's baby girl all winter to ride a new car down MLK in sublime summer effulgence; if you had your hopes doused a decade too soon; if you caught a coveted bus route to almost all the elementary schools in the city; if you had an infatuation with colors: red or blue, or maybe transformed from one color to the other; if you used to stand all night on a dim side street for a few bucks (if that) of profit; if you flirted with a second or third strike or were stretched out with a mandatory sentence; if you had a habit of taking stuff with a pistol that don't belong to you; if for fear your moms would find and puff it you couldn't ever stash at home the sack fronted by a headstart-on-prison big homie, it means there's a good chance that the Rose City, that The Town, that our city—and we could mourn this but maybe it's reason to rejoice—might now, and if not now, then soon, sooner than anyone knows, be a place that belongs to someone else.

Mitchell S. Jackson is a Portland native who lives in Brooklyn, New York. He teaches writing at New York University. His novel, The Residue Years, was published in the summer of 2013.

I am white woman who was a school secretary at Boise-Eliot in the late 1980's and a community social worker at Columbia Villa in 1991-92. I remember children's faces and many names. I remember stories I was privileged to hear even though my comprehension was inadequate. Thank you, Mr. Jackson, for your words.