Brian Doyle argues that life in the suburbs is far from the bland prison it is made out to be. 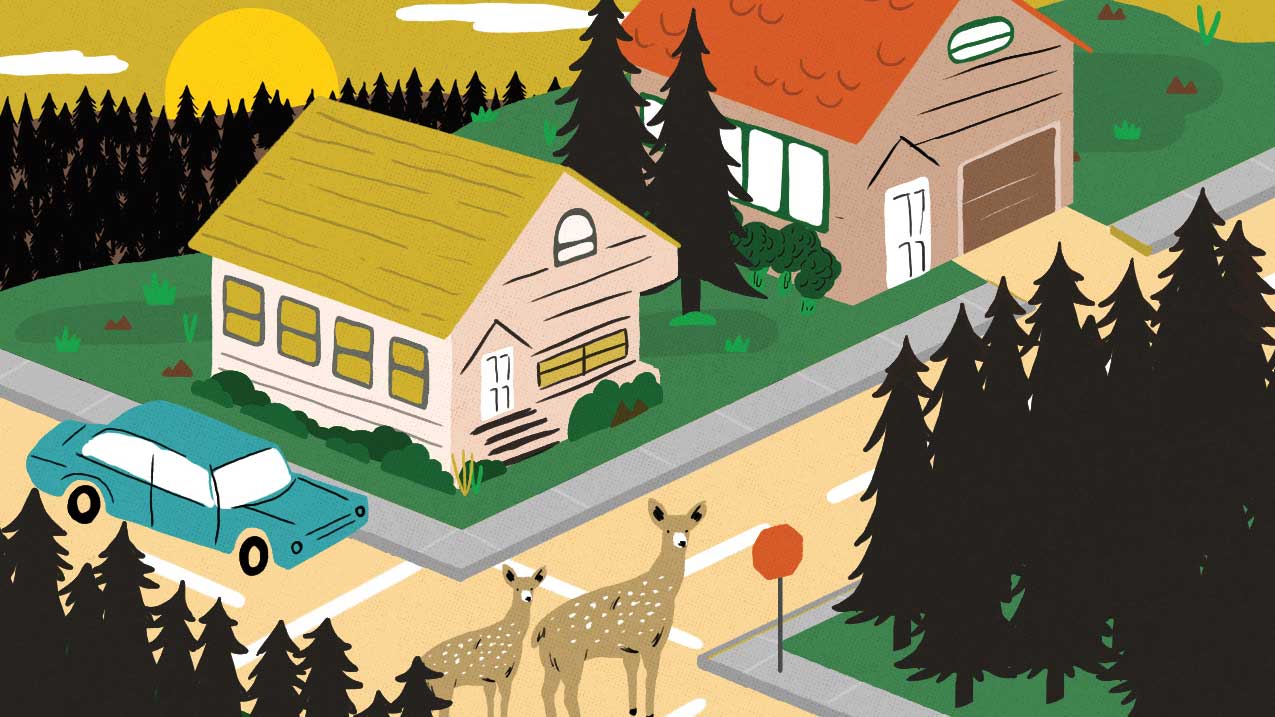 Why do we sneer at suburbs? Why do so many films and novels generally portray them as soulless, colorless, bland prisons for mindless automatons—vast, shallow plats of repression in which the young and free-spirited are trapped, and from which they struggle to escape? Why is that? It's wrong and stupid and silly, and I am weary of it, so I will now rise to the roaring defense of suburbs while sitting in my small suburban house, which, despite its moist corners and shaggy coat of moss, seems denser with life and more stuffed with story than any city domicile or rural retreat.

For one thing, there are more animals and plants around here than there are in the city: we have had deer bound down the street, coyotes trot up, hawks and owls and rabbits and herons and eagles and osprey and vultures and chickarees and wood rats and raccoons soar and hop and swoop and scurry nearby, beavers and otters—and probably trout and turtles—live in the creek one street away. Eighteen different species of trees grow within a stone's throw, and four species of edible berry. It seems to me that my education and that of my children are inarguably deeper because we live in reach of so many species of being, not just canine and feline and urbane.

But we are also surrounded by more than a hundred human beings within a one-block circumference: teachers, coaches, policewomen, actors, restaurateurs, carpenters, mechanics, engineers, attorneys, the happily retired, the unhappily unemployed, and the Bird Lady, who lives with thousands of parrots and cockatoos, it seems, from the shrill cacophony at her end of the street. Many of these people I know well enough to say hey and chat about sports and weather; a few are good friends; many I do not know, as they are new or do not wish to be known, such as the man in the cottage overgrown with blackberries, with its mossy door on which no halloweening child has ever knocked.

So we have the dense human burble and the braided tales and graces and pains of city life, while also swimming in the buzzle and thrum of wildlife and the snap of clean air for which people seek rural retreat at the coast or mountain or riverside. We can easily work in the city and get there by bus or automotive propulsion; and just as easily, we can slip into thickets and farmland when the hurly is too burly.

Are there many subtle and complex reasons for all this? Sure. Are there rafts of problems in the suburbs, from drug use to rape to meth labs to pollution to racism? Sure. Are they Valhallas and Nirvanas and the acme of the American dream? Nah. But they are often absolutely lovely, friendly, generally safe, generally well-managed small villages and towns and hamlets that are unfairly demonized as cookie-cutter white enclaves; in many cases they actually are small villages and hamlets that the city metastasized toward, changing their flavor forever; and they remain, for all the cultural sneering, the places where most Americans want to live. Are most Americans fools, to want to live and raise their children not in the city, which can often be cacophonous and dangerous, but in a town near the city, a place where kids can swim and run more freely, a place perhaps with better schools, a place with plenty of neighbors for stimulus and safety, but a little more space, more trees, more hawks?

In general, if you look at the last American century, you see people moving to the suburbs: rich and poor, of every color, every religion, every ethnicity. Why? Because suburbs are good places to live. They are neither/nor. They are neither as remote as much of rural America, where jobs are few for the many, nor are they as dense and tumultuous and edgy as cities. In general, people move to where the jobs are, and once they have jobs, they move to where they are most comfortable. We want some privacy, but not isolation; we want enough space to house and raise children in safe and healthy and stimulating ways; and so, in the main, we live in suburbs.

Question: Do those who portray the suburbs in literature and film and television as a wasteland, as a sort of dispirited ant farm writ large, live in cities? What if their artistic production is wildly successful and earns them gobs of money: would they stay in the city, or move to a big, new house by the beach, or overlooking the river, or with a view of the mountain  in the suburbs? Just asking.

The two books that most woke me up to something subtle and true about the suburbs were Second Nature by Michael Pollan and The Thunder Tree by the shaggy Northwest brilliance of Robert Michael Pyle. Both explored the idea, utterly new to me when I encountered them, of a sort of in-between space—not wilderness, not urb, but us, as it were. Both books gently but deftly made me realize that we generally use silly and falsely dichotomous categories when we talk about landscape. Pollan used gardens as his heroes—not farms, not wild growth, but a sort of negotiation with plants, in which we provide labor and they provide food or managed beauty. Pyle used abandoned lots and weedy yards as his heroes—the actual wild spaces in which most American children first encounter insects and small mammals and birds and wild berries and unbuilt space.

I suppose that this, to me, is the glory of suburbs. They are that in-between space, with something of the populous fizz and bustle of cities, and something too of the sprawl and ancient lure of landscape not wholly ordered by human beings. Perhaps they are often dismissed and insulted by popular culture because of this very compromise, this mongrel nature; but perhaps a little of both is a fine way to be.