Debra Gwartney on learning to love the isolation of her adopted home on the McKenzie River. 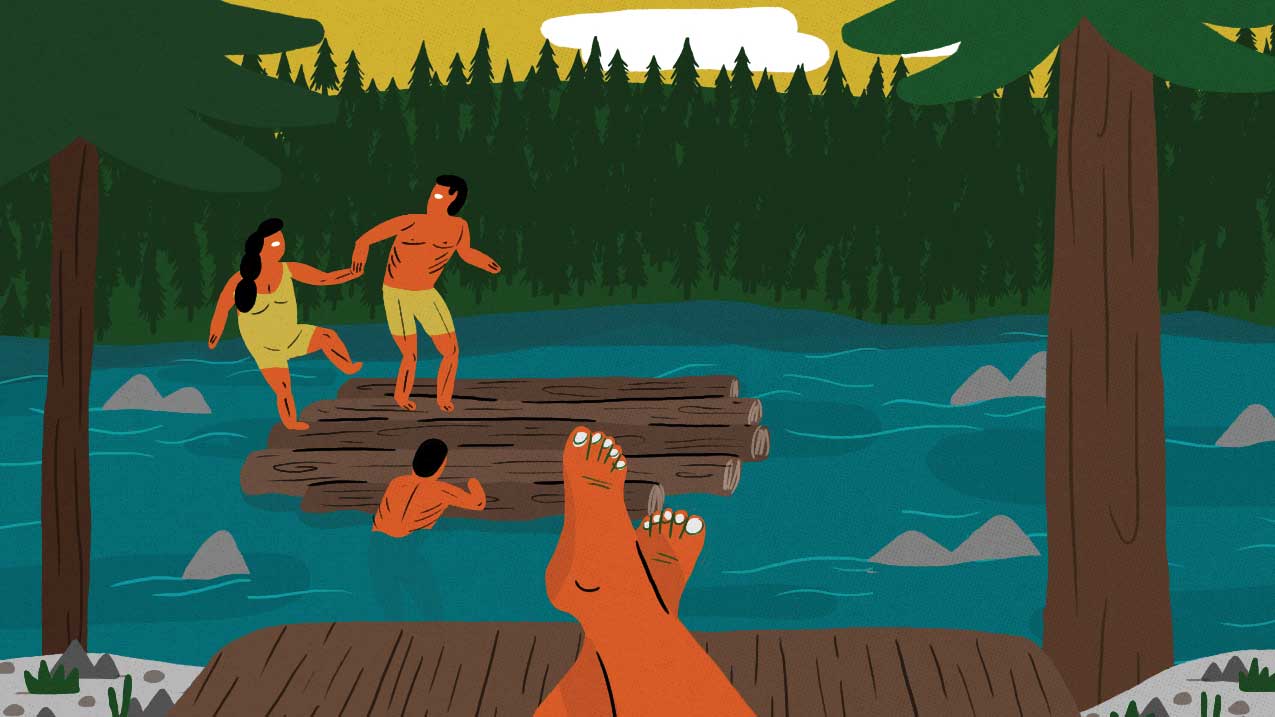 Rain pounds on the roof today, thrumming its familiar rhythm and boiling the river below our house, but I'm set on believing this weather will lift, giving me one more sunny afternoon, at least one, to laze on our new deck before autumn sinks in. Two cedars that cracked and fell during a storm last winter—one slamming into the other, noisy dominoes—got split and planed and transformed into this deck overlooking the McKenzie, a platform that smells like forest duff when it's sun-soaked, which yawns under me like a cradle.

This property has been my husband's home for four decades, but it's only my third summer here. As part of my effort to know the place, I'd venture out to the deck on sunny days after noon, arranging myself on a soft orange chair, laptop screen tipped into a shady corner. I was convinced I'd get work done this way, outdoors—stirred air, twinkling field of sorrel, mosquitoes and horseflies be damned. I did accomplish enough, I suppose, though I was often drawn to the surface of the water, the blue and green and yellow rafts that bounced by, the voices of raucous merrymakers reaching me before the flashes of colors that signaled their boats. In the gaps between happy, wet tourists I listened for the osprey chicks growing up in a nest atop a Douglas fir snag across the river. Their cries sometimes jarred me to my feet. I jogged down our drive for a better look—worried the nest was invaded or had crumbled, the chicks abandoned on a bare limb. But, no, the youngsters just wanted food. I pushed my toes into the edges of the cold water, reminding myself of the frantic note in a hungry baby's call as if, despite the consistency of every previous meal, this time she might be abandoned.

I'm learning how to live here on the river, the sounds, the smells, the air of it. There are many lessons still to come. When I'm away—I, a relatively fresh presence in this place that, in general, takes its time in the accepting or not accepting, the blooming and the dying—my husband usually finishes his phone calls by saying that my place misses me. The statement takes me aback no matter how many times I hear it. The one about my place missing me. Does it?

I was born in a tiny mountain town in Idaho and, like many children there, began looking for a way out before I could speak. I went on to a college in the panhandle with my young parents, and then we moved to Boise. But it was Missoula, not Boise, that measured up to my early notion of what a city was; that was because my grandmother often drove my sister and me over the hair-pin Lost Trail Pass to shop there, in Montana's metropolis. We ended these journeys with a bowl of cream of mushroom soup—dash of bright paprika across the bubbling surface—in the lounge of the rambling Red Lion. City stuff. Sophisticated, urban stuff—or so I thought then—that called to me.

When I was sixteen, my parents took me to San Francisco. In the cab from the airport, I tipped back in my seat to study the sky-high buildings and jammed sidewalks, the hustle of busy pedestrians—people going somewhere—and I said, “I'll live here.” Maybe they laughed; I don't remember. The idea was lofty, and in fact has never lit on solid ground. I haven't moved to San Francisco, Boston, or New York; not to Paris, where I was certain I'd end up for at least a year once my children were out of the house; not to Istanbul, where I'd awake with the call to prayer. No. I'm here. On the edge of a river in western Oregon, an hour from a grocery store, a decent hike to a neighbor's, and still in the middle of the extended handshake of welcome. Or is the place still testing me? As in, what are you doing here? I sit on the deck and try to tip into a peace we all search for at one time or another. Belonging.

I do get to cities, frequently. I'm fortunate that way. The latest was New Orleans, the nighttime view from the hotel's forty-seventh floor a cavalcade of sparkle disrupted only by the dark line of the Mississippi. On the first morning, I got out of the shower and discovered what looked like a tiny pebble stuck on my thigh. I'd carried a tick with me, all the way from the McKenzie River Valley. I'd plucked ticks out of children and pets, but I called up a YouTube video on the best method of extraction anyway. My husband watched, too—both of us more fascinated, I think, with the easy tap into technology than the information it imparted (match and pop bottle, bad; sharp tweezers, good). The only Internet provider in our part of Oregon said to me recently, “Ma'am, you will never get a connection at your house,” and when it rains—we get about a hundred inches a year, so that's a common occurrence—there's no cell-phone reception indoors, which means I stand under a cluster of two-hundred-foot, drippy Doug firs to take calls. I complain about this lack of modern technology to just about anyone who'll listen, howling about the sacrifices I've made to become a rural denizen, ignoring the note of relief in me, the ease that I've discovered comes with silence.

The tick, rotund, popped right out, gripped by my pointy tweezers. I placed it on the hotel's fancy room-service menu so I could study the gray dot of insect, its legs flailing, under the desk lamp. I'd picked up my McKenzie hitchhiker, I guessed, on my last-minute run up to the creek behind our house, or the few minutes I'd spent leaning against the rail of the deck to watch the river, to listen for the osprey chicks nearly fledged, before I departed for a week. The tick wasn't exactly the friendliest reminder of home, not the note of assurance one might expect from far away, but as a woman who's waited a long time to belong somewhere, I got the message, loud as I could on the forty-seventh floor of a hotel in New Orleans. Your place, hey, it misses you.

Debra Gwartney is the author of the 2009 memoir Live Through This, which was a finalist for the National Book Critics Circle Award, the Oregon Book Award, and the PNBA award. She is currently working on a memoir about growing up in the West and the heritage of Narcissa Whitman, a project for which she received a research grant from the American Antiquarian Society. Debra lives on the McKenzie River with her husband, Barry Lopez, and is on the nonfiction faculty at Pacific University.