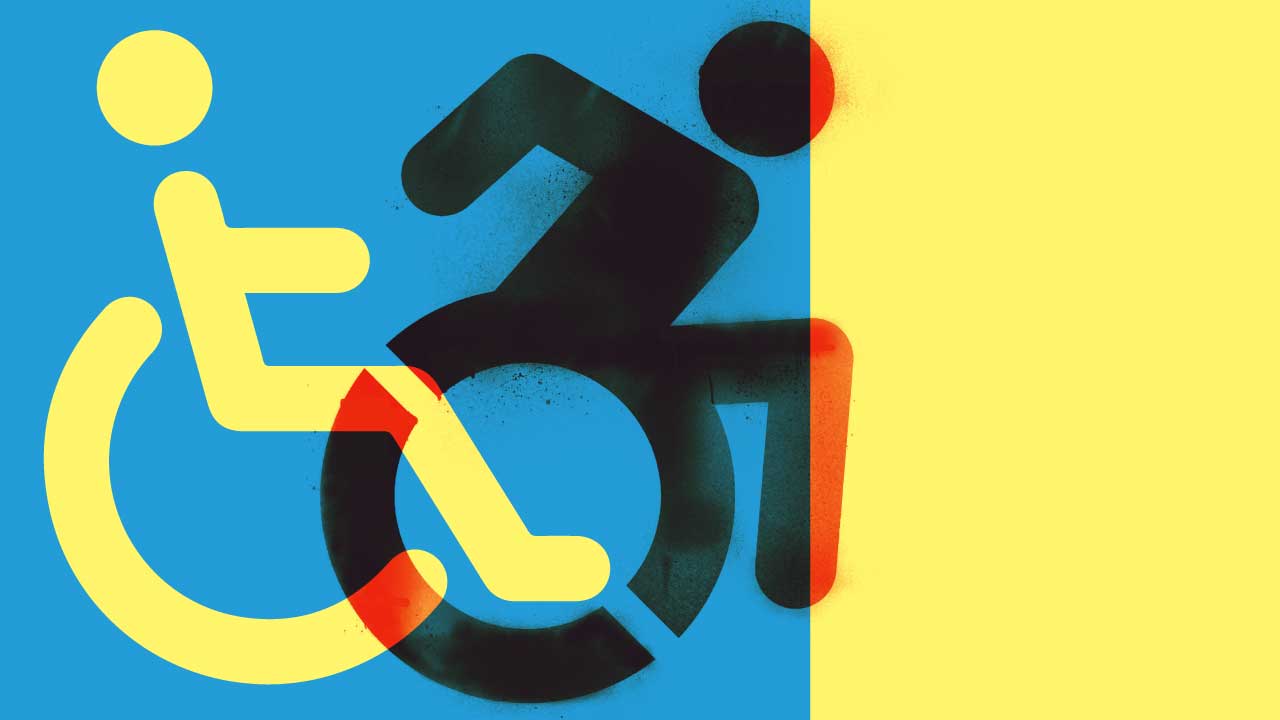 In recent years, the International Symbol of Access, the familiar, blue-and-white icon of a human in a wheelchair, has been transformed. Where the old one reclined, the new one leans into motion. Where the old one is rectilinear, its geometry like a rough draft of belonging, the new one is rounded at knees and elbows, more like a body, more like the rest of its iconic kin. It was designed by the Accessible Icon Project, and its revisions indicate a conceptual shift: both icons mark access, but only one highlights agency, a living body, the person to whom access is to be granted. One suggests an essence; the other suggests a citizen in the world.

Eighteen years ago, I wouldn’t have noticed the difference, or cared. If I notice it now, it’s partly because of Laura, my younger daughter, who has Down syndrome. The arrival of a child with a disability changes what you see, what you think about what you see, and ultimately what you say. You think more about public space: how we inhabit it, whom we welcome, whom we exclude, and how we make our intentions clear. I’m not physically disabled, and neither is Laura; though my stroller-pushing years brought home the broad benefits of ramps and curb cuts, my interest in the icon is notional, indirect. But access, as historian of design Bess Williamson writes, bridges the built environment and the principles by which we might live. It means more than “the ability to enter into, move about within, and operate the facilities of a site”; it also points to “a more inclusive society,” to “social and political participation.” The new icon engages both sets of meanings: it can mark both a parking space and the distant possibility of belonging.

Laura’s arrival demolished the remnants of any illusion that parenting is a solo endeavor. You can build a home, but you cannot build a world.  My wife and I had to depend on others, on speech therapists and family, on heart surgeons and friends, on other parents, on past and present activists we have never met. It takes a network. It takes a history. But those early dependencies led to a later interdependence, as Laura grew from child to young adult. If a glimpse of the icon plucks sympathetic strings inside me, a thought like a suspended chord, it’s because it stands for the possibility of belonging, for full social and political participation, though what that might look like remains an open question.

Unlike every other icon in public space, the accessible icon is paradoxical. On the one hand, it strives for clarity: like other isotype icons (“isotype” = “shaped alike”), it is standardized not only for visibility, but to avoid the ambiguities of words. A picnic table means you can have a picnic. A tent means you can camp. But unlike its kin, the accessible icon also aims at ambiguity. From the beginning, it was meant to provoke debate. Its codesigner, Sara Hendren—an artist, writer, and design theorist—writes, “We wanted to have a graphic that was an enigma, or a question. Sustaining that question—in the form of collaborations, events, writing, exhibitions, and more—has been the activist heartbeat of the project.”

It’s a standardized icon now, but it had a decidedly nonstandard beginning. In Boston, in 2010, Sara had begun noticing new, improvised revisions of the old universal symbol of access. She liked the newer versions of the icon, and she soon collaborated with graffiti artist Brian Glenney to redesign the new image. They created “a clear-backed square sticker that would be transposed right on top of the original, to show the old image and the new one simultaneously.” They began slapping these up over existing signs on Boston streets. The combined image looks like a soul launching from the body of the old. Later, they collaborated with graphic designer Tim Ferguson Sauder to standardize the icon, and it now exists worldwide, the new icon coexisting in cities with the old.

For a writer, revision means erasure and improvement. The first draft is replaced, subsumed, by the second, the second by the third, and so on until the finished piece. So I was fascinated by the (literal and figurative) transparency of the icon project at its outset: the present filtering the past, both visible at once. I was drawn to the particular vision of activism, one charged with humility: it evinced respect for the first wave of disability activism, even in the midst of critique. And I liked the calculated act of disobedience, of making change without asking permission. That act resonates for me as a parent. Even in the best of situations, you have to push sometimes, for services, for inclusive placement, for an elusive, supported ordinariness. For access. The act also resonates for me as a writer, in a you-must-revise-your-life kind of way. Laura’s arrival revised my life; in response, I revised my understanding of writing and what it was for, superimposing the new understanding on the old.

After Laura’s arrival, boundaries I had taken for granted—between writing and parenting, art and politics, the creative and the critical—began to crumble. I abandoned poetry and turned to prose. I wrote a memoir about raising Laura. All the while I was thinking less about art in isolation, more about the readers who bring it to life. I wanted them to have access to my experience, to a sliver of what it felt like in my family. I hoped for a little more connection. The book could just be a node, a provocation: a transparent revision of the world slapped up over the original, a way to start a conversation. An overlay, which itself implies that the world is layered and thus endlessly interesting, that the written response to the world can be, like an icon, both declarative and mysterious, and that the finished piece is only the beginning.

Much later, I learned that the icon’s designer, Sara Hendren, has a son with Down syndrome. I’d finished the memoir and begun working on a book about biotech and disability. I’d been reading her work on technology and finding it incredibly useful. (“All technology is assistive,” she writes—one of the obvious-when-you-think-about-it points that I live for as a writer, oases in the deserts of research.) In an interview, she mentioned her son in passing. As Laura did for me, his arrival changed her view of the world around her. Drawing on her design expertise, she noticed things she hadn’t noticed before.  Her vision had been changed too, or redirected, and that had led to the image, and the image is doing work in the world. Sara has since become a friend; when my book was published, she interviewed me at the book launch in Cambridge. The book became a literal site of conversation, as I’d hoped: not an endpoint but a beginning, something that (like the accessible icon itself) springs from and leads to new collaborations.

Sara has written that the redesigned icon is a kind of answer to the “rectilinear geometry” of the original, which “doesn’t show the organic body moving through space.” The new icon, then, achieves a kind of symbolic parity, one linked to rights and accommodations. It’s ironic, then—and emblematic of the ongoing collision between disability and technology—that even as people with disabilities achieve fragile gains both real and symbolic, the siren song of human improvement is audible again. According to some futurists, some scientists, technological enhancement is inevitable: whether by brain-computer interface, engineered embryos, or replacement parts, the old wishes to be stronger, smarter, and better appear newly possible, and with it the possibility that we will ourselves become objects of design. What our public iconography will look like, should that future arrive, is hard to guess—as is the place of the unenhanced, let alone the disabled. “Isotype” means “shaped alike.” If we are shaped differently, from outside in or inside out, then the icons may have to adjust. And yet in that future, the icon may be ahead of its time: its vision of a body in motion does not distinguish between the body and technology, and so it hints at possibilities for technology that are not entirely dark.

In Shaping Our Selves: On Technology, Flourishing, and a Habit of Thinking, the bioethicist Erik Parens argues for the ideal of “binocularity.” We have depth perception, he argues, because our two eyes offer two slightly different pictures of the world, which the brain assembles into the understanding of depth. This metaphor, Parens contends, holds true for thinking about people. We can understand people, he writes, as subjects—"beings with minds, who can (to differing degrees) have the experience of being free”—and “objects, which are not free but determined by an infinite number of forces—including genes, neurons, hormones, nutrients, intuitions, desires, reasons, customs, geography, and history.” He argues that both understandings are critical to understanding the relation of technology in human flourishing. He also acknowledges that we cannot hold both visions simultaneously, that the best we can hope for is a kind of oscillation. Perhaps, then, the best perspective is the residue of that oscillation. Or it is, to take a darker view, a kind of seasickness, the nausea that occurs in the absence of ground.

It occurred to me, reading Parens, that though binocularity may be impossible, it is nonetheless the province of metaphor, which allows us to see two things in one glance: the brain is wider than the sky. This suggests the place of art and literature in the conversation about bodies of all kinds and where they belong: it can comprehend people as both beings with minds and as objects, and it can allow us to see two things in the same glance, like a new, transparent icon through which the old icon, an older time, is visible. We cannot, perhaps, have true binocular vision in any one moment; but perhaps the best writing can offer a steady power founded on oscillation, an alternating current, an uncertainty to light our way.

George Estreich is the author of Fables and Futures: Biotechnology, Disability, and the Stories we Tell Ourselves, just published by MIT Press. His memoir about raising a daughter with Down syndrome, The Shape of the Eye,
won the 2012 Oregon Book Award in Creative Nonfiction. He lives in Oregon with his family.