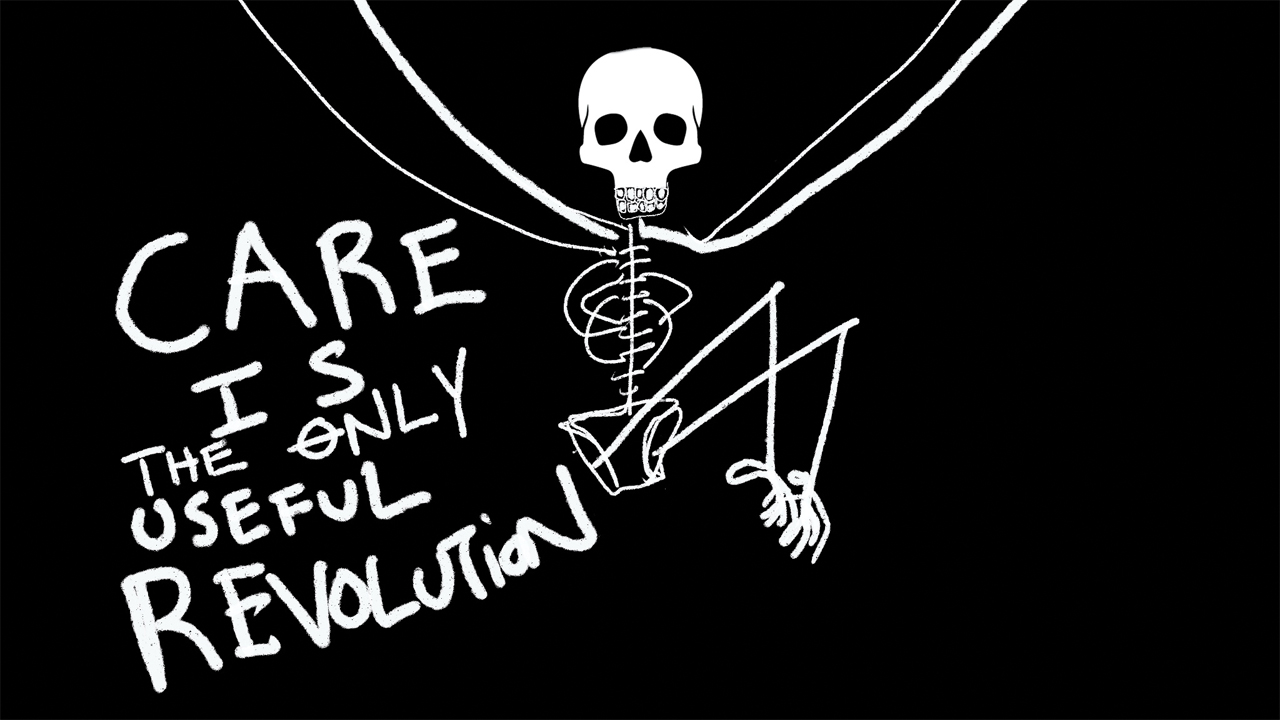 (It was the word “only” that gave me pause.)

Hyperbole is a figure of speech meant to give emphasis through the use of exaggeration. It can give what we say an importance and immediacy.

Words like, “always,” “forever,” “never,” and “only” are often used in hyperbolic statements.

That war will go on forever.

You’ll never get through to those people.

They always say the same thing.

I was literally the only one doing anything.

Hyperbole exchanges accuracy for a sense of intensity.

This is not an article about hyperbole.

To be honest I’m not sure it’s even an article.

It’s more of a freeform blurb that will perhaps be a blip among the priorities of your waking hours.

But it’s something of an introduction as I try to explain the title of this piece, which I had better start doing soon before I hit my 500-word limit.

Hopefully you have your own opinion about the title.

I believe care is the ONLY useful revolutionary act because it is the ONLY one that actively transcends prejudice to address areas of need. It is not overly romantic or intoxicating. It is the sober critical assessment of what is and isn’t working to heal the longstanding wounds we hold hidden behind our flags and armor.

And while the rest of us are busy with whose wrong is the wrongest and who’s cruelty is cruelest. Care is methodically practicing the beautiful maintenance of showing up and attending to our neglected pains wherever they may be. It is choosing its words carefully, pulling the stitch closed, reminding us what it’s like to feel safe. It picks up the plastic water bottles and poster board left in the street after the protest. It clears away the rubble after the bombing. It makes a sharing meal. Addressing the dressings on wounds reopened. It grieves and wakes and mourns losses new and old. It makes space to feel the magnitude of our suffering and rejoicing alike. Maybe this essay is exactly the kind of overly romantic depiction I am claiming care isn’t. And that would make sense. I’ve been passively and actively absorbing a heroic “nick of time,” “one and done” savior/martyr mentality for years. Long before being presented with an edited version of the “I have a dream speech” in public school. Care as a final arrival point has been part of my diet for quite some time . But if this one essay or article or whatever it is isn’t the only one of its kind. If this isn’t the only attempt to show up for something better, then maybe it doesn't have to be totally devoid of exaggeration and romanticism. It just has to be part of a larger community that continues to state and restate that revolution is care and care is ALWAYS useful.

MOsley WOtta (Jason Graham) is a multiethnic, multimedia, multivitamin artist living in Central Oregon. He is a 2021-23 Fields Artist Fellow.

What I like about your way of thinking is that Care is open to everyone and every group. It's open to them and us. No one has to flash a membership card to Care.

Your words are always and forever beautiful. Hyperbole? Truth. Needle and thread for the soul.

I am enamored of this piece of writing, whatever it is you care to label it, because it’s so beautifully states the underlying philosophy of the Soul Box Project. Since The Las Vegas massacre our Project has addressed the US gunfire epidemic in a way we feel is most revolutionary. That is , it is the creation of, and visual exhibition of, community caring: “ It’s less sword and shield, more needle and thread.” or folded paper.