The stories of struggle, insecurity, and loss behind a successful writer’s accomplishments 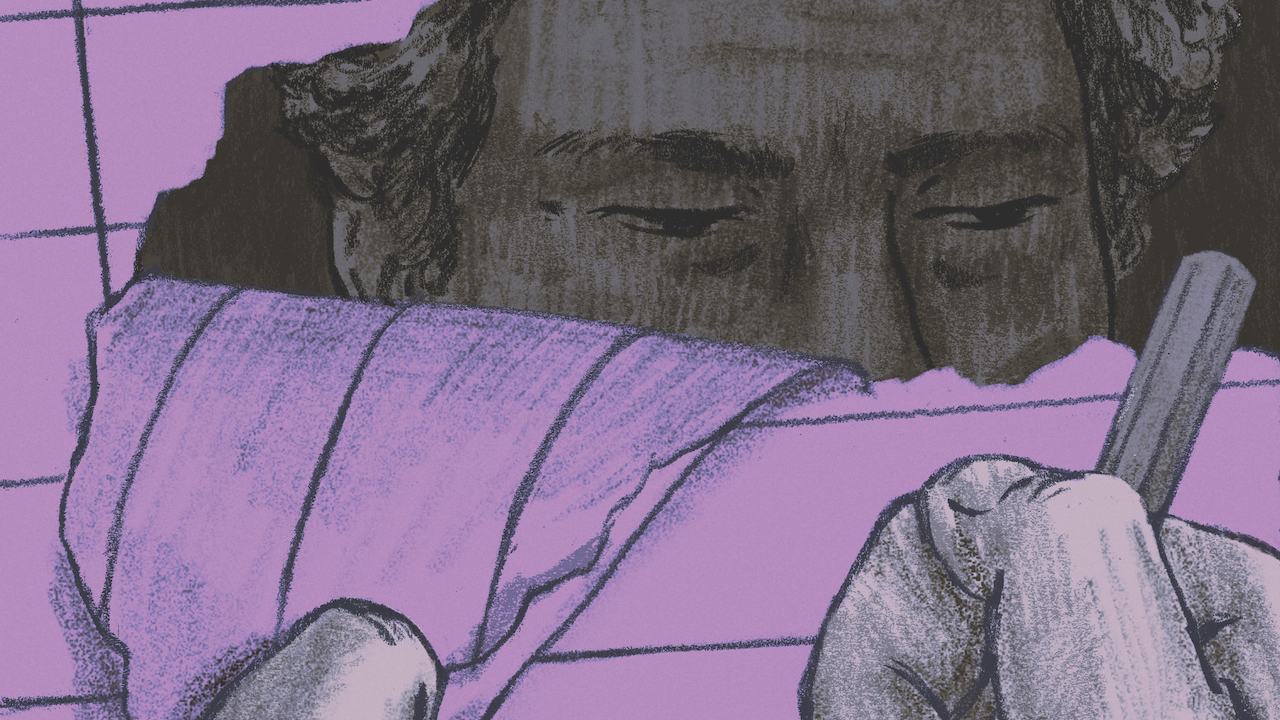 The “Fail” issue was one of the first after a major redesign that aligned the magazine with the organization’s name change from Oregon Council for the Humanities to Oregon Humanities—a change and rebranding that was meant to make programs and publications accessible and relatable to more Oregonians. This personal essay signaled this organizational change: Kim Stafford, a well-known writer and public figure (Oregon’s current Poet Laureate), bravely examines his sense of responsibility for his brother’s suicide, in the process offering readers access to his very relatable struggles and insecurities.

I’d been teaching writing at Lewis & Clark College for close to thirty years when one of my students made a startling suggestion. We had been sifting our memories for stories, writing in response to a series of prompts, but we weren’t making much progress. “Could we write a résumé of our failures?” he asked.

“How would that work?”

“Well, you know, when you write a résumé, you list the so-called high points—education, awards, jobs, all the big-deal stuff. But if your life is like mine, you had to pay for those with a string of disasters. It seems like there might be something to write about there.”

By this time, according to one metric, I had accomplished plenty. Every time I revised my résumé, there was more stuff—jobs, publications, “distinctions.” I was ready to turn to failures. So we tried in class together: list your accomplishments and, for each, tell what happened behind the scenes. My first take looked something like this:

As I composed this list, I recognized a perverse code in professional life: each named accomplishment hid the true life of struggle, faltering, failure. I was forced to acknowledge, over time, that I was something of an expert in this area.

The writer James Hillman identifies “story consciousness” as the essential skill for psychic survival. If you are raised on stories, he says, you recognize that the life path goes spiraling down for a time, faltering, failing ... but then there is a turning, and things get better—things trend upward for a time, and you prevail, gather momentum, succeed ... Then there is a turning, and your personal hero’s journey falters again. Plotted on the wall, this undulating path forms a classic wave pattern—crest, trough, crest.

Pondering this pattern, I have begun to recognize a stern outcome in my brother’s life. If you do not have story consciousness, and you are on the way up, when the turning comes you may think this is the end of your story: you are a failure, period. Or when you are on your way down, you may think, again, that failure is your whole story. In either case, to not expect the turning can be your doom.

This inability to predict an upward turn helped kill my brother. Traveling down toward darkness, he thought this trajectory final, inescapable, the true story of his life.

I still can’t forgive my preeminent failure, letting my brother die. My psyche works like this: when I do something that doesn’t work, that is wrong; something wrong is bad; and when I do something bad, I am a bad person. I struggle to find the swing back up toward the positive from this trajectory down.

I’m not proud of this habit in my mind. It drives me crazy, can shut me in a cage. Some variation of this psychic logic, flaws and all, took my brother down. Bret lost his job, house, and happiness, and went into a personal darkness, stopped sleeping, became immune to consolation, and took his life.

Some years ago, during a graduate-level writing workshop on a cold November night, a student asked me at the break if she could talk with me after class. “Of course,” I said. After the second half of the workshop, which I felt it went pretty well, the others melted away into the rain and she sat down to face me.

“I have been watching you trying to teach,” she said, “and I have to say, you are really not very good at what you do. People come to a class like this to make structured progress on their writing, and all you really have to offer is exercises to make new beginnings. I thought someone should tell you this, in case you have other options for a career.”

As she spoke, I felt my heart rattle, heard my mind fill with the sounds of clank and clunk as her words shifted the gears of despair. Yes, said a voice within me, you are probably right. My teaching is bad, and I am bad. Far from being a surprise, your assessment finds companion thoughts buried deep in my own mind. I have long known what you are saying.

Several weeks later, this student asked me to write a letter of recommendation for her. I got out a crisp sheet of bond with my college’s letterhead, and produced a glowing assessment of her skills and prospects. She got into the MFA program of her choice and now seems to have a thriving career. My failure and her success are both by-products of what is truly at work in each of our life episodes: survival, learning, forgiveness, and change.

It strikes me further that our featured successes as a nation may actually be disguised failures. And our storied failures are the times of greatest learning. If our nation had a résumé, it might include the following:

The braid of failure and success in these incidents haunts me. While people were cheering the end of the Gulf War, I felt a chill. We killed thousands, yet had a parade.

This unsettled but continuing marriage of success and failure can be good for us only when we learn to ponder what success costs, and what failure offers. Friends tell me that my habit of calling my successes failures is a sickness and untrue. Give yourself some credit, they say. Look at all you have accomplished.

My ability to give myself some credit when I’m down takes me back to a moment in childhood, when a parable invited me to consider a balancing act between success and failure: Hunched beside my brother on a threadbare couch in Southwest Portland, our mother or father would read from Fifty Famous Stories. This little Bible held iconic stories of how, when one is cast down, great learning comes. Remember with me, the story of Alfred and the Oat Cakes:

King Alfred has failed. He can’t unite his country. Norse invaders rule. Alfred’s army is scattered, and Alfred is alone, in rags, wandering. He comes to a hut, and asks for food. No one knows he is king, and he is too ashamed to say so.

“Old man, if you will watch these oat cakes by the fire,” says the woman of the house, “I will give you one.” So Alfred settles down by the fire to watch. In flickering flames, he sees his kingdom’s dissolution. All in ashes crumbles from the embers.

But as he continues to stare, he thinks of one thing he might do to gather his people. Then another. Gradually, a detailed plan gathers in his mind.

“Fool!” shouts the old woman. “The oat cakes are burned, and you shall have none.”

Some days, tipsy with self-accusation, I, too, “have none.” On such days, I ask myself, “In my résumé of successes, was it fine that I let the oat cake burn, but saved the kingdom? Let my brother die, but survived?”

I recently googled my brother. Since he died before the rise of the Internet, entries are few. I find his master’s thesis about harmonious relations. And I find his name listed at a site called “400 Historic Suicides.” Along with Samson, Socrates, Judas, Sylvia Plath, and Kurt Cobain, I find my brother:

A note at the head of the list indicates the plus sign means “inspirational (influenced illustrious work).” I presume this refers to my father’s poem about my brother, but how strange. Surely every suicide forces deep thought and a fierce fight for creative survival by family and friends—all of us remaining.

We burned the oat cake there. The biggest failure of all: my brother for a poem. Trading joy in my twenties for a PhD. Trading time with my family for the governor’s approval. Of course, it’s all complicated. But today, as I write, I have turned sixty-one, and it is necessary to take a hard look at what I choose to do with the balance of this amazing life, be that balance a day, a decade, or more. I carry my dead with me: my brother, my father, my beloved Aunt Helen—who, in the 1930s, wrote her dissertation on heroism and doom in the Norse sagas. In a landmark story, as the hall around him burns, the doomed Icelandic farmer Njal utters wisdom that the writer records, savors, and offers to us. Is such a moment a failure or a success? As you look deeper, it gets harder to see either as simple.

Maybe success means surviving a significant failure with learning. Maybe failure means an episode of success without some wisdom for the lean times that are sure to come.

Kim Stafford is the author of a dozen books of poetry and prose, and editor of half a dozen others. His book Having Everything Right: Essays of Place won a citation for excellence from the Western States Book Award in 1986. Stafford has received creative writing fellowships from the National Endowment for the Arts, a Governor’s Arts Award, and the Stewart Holbrook Award from Literary Arts for his contributions to Oregon’s literary culture. His work has been featured on National Public Radio, and he currently serves as Oregon’s Poet Laureate, traveling the state to share the gift of poetry.

Why bother with history? Why bother at all? An essay by Robert Leo Heilman

From the director: Looking Back, Looking Forward

The State That Timber Built—2012