"Farming Is So Much More than Food"

Megan Horst on the future of Oregon’s food systems 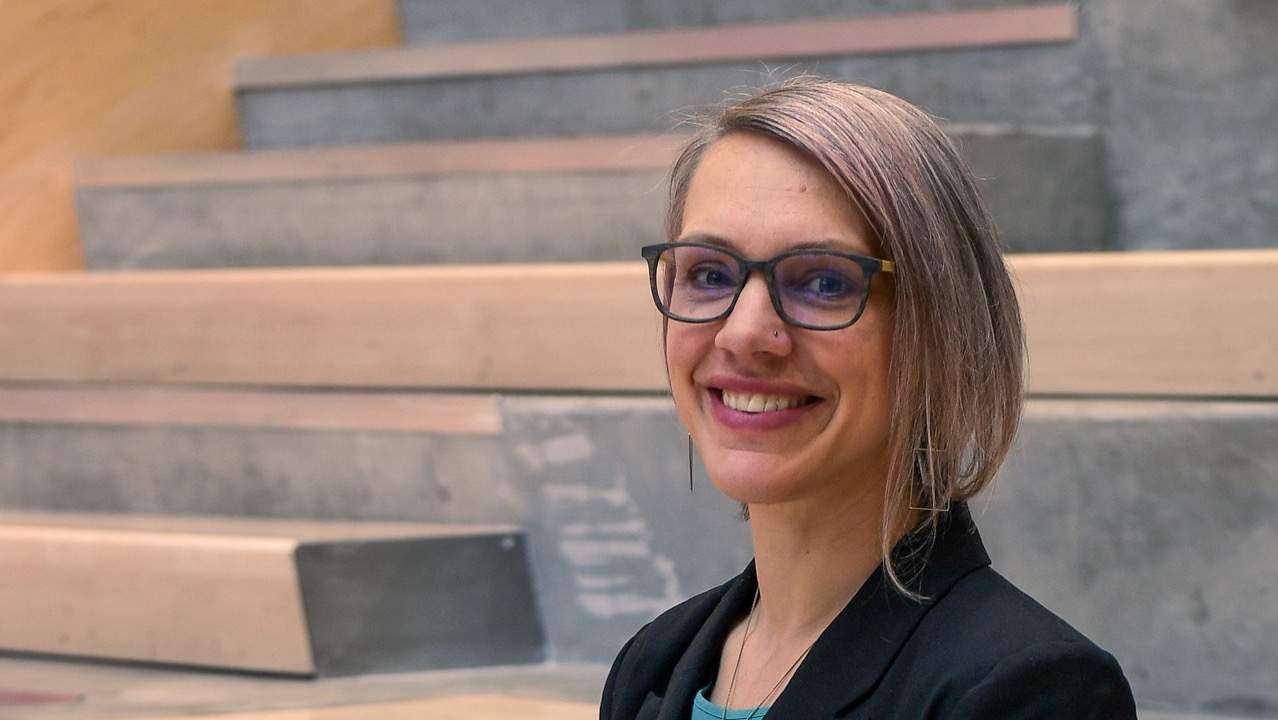 In 2020 and 2021 we have glimpsed the challenges Oregon’s food system will face over the next fifty years.

Wildfires, heatwaves, and a severe drought point to harsher conditions that, according to the Intergovernmental Panel on Climate Change’s most recent report, will worsen and further impact food systems. Farms are facing a labor shortage. Large corporations continue to buy up agricultural land, pushing out generational farmers. And the theft of land from Native Americans in the 1800s, a wrong never rectified, continues to raise land-ownership debates around the state.

According to Megan Horst, an associate professor at Portland State University whose research focuses on the relationship between food systems and planning, meeting these challenges will be difficult. But with education, community engagement, and the right policies, she says, Oregon could build a robust and equitable food system over the next fifty years that justly compensates farmers and farm workers, embraces climate initiatives, addresses inequities, and feeds every Oregonian.

“We have the know-how,” Horst says. “How do we shift the incentives and our culture more broadly to make that change?”

Horst, who has been at PSU since 2015, leads Oregon 2050, an interdisciplinary project created by PSU’s College of Urban and Public Affairs that seeks to guide Oregon toward an environmentally sustainable, socially equitable, and fiscally resilient future.

“The project is intended for scholars and our collaborators in the public, private, nonprofit, and advocacy sectors—thinkers in general—to reflect on where Oregon is now and what that means for 2050, point out where that’s not looking so great, and identify possible pathways we could take to get to a better 2050 for all Oregonians,” Horst says. “The project is very multidisciplinary, and ideally inter-/transdisciplinary, meaning, I’m trying to get folks out of their kind of topical silos and really think about how these topics or systems interact.”

The project addresses multiple issues facing Oregon’s future, such as land use, environmental health, transportation, and housing. Its first phase, which Horst leads, brings together some fifteen PSU scholars and community collaborators, each of whom will draft a chapter of a book that will compile the project's research. (Horst drafted the chapter on land use.) The next phase will involve a group from the National Policy Consensus Center, who will work on community engagement.

“The idea of Oregon 2050 is that it’s not supposed to be just an academic exercise,” Horst says. “The hope is that it really is part of the deliberations statewide around our future. The dream is that it would ultimately lead to some actual changes in the real world, like policy changes at the state level.”

In addition to her work with Oregon 2050, Horst has done extensive research analyzing Oregon’s food systems, land use, land ownership, and climate action. She sits on the advisory board for the Portland Clean Energy Community Benefits Fund, and she is engaged with community food systems in Portland and statewide.

We asked Horst what she thinks are some of the biggest challenges facing Oregon’s food systems, as well as ongoing and potential solutions. Here are her answers.

“By 2070, we have to see lots of regenerative practices. Currently, food production is a major contributor to climate change. It’s a major contributor to water pollution, air pollution, and poor environmental health. But it doesn’t have to be that way. We have lots of knowledge about how to grow food in ways that are good for the soil, that rebuild soil, that don’t pollute water and in fact can even lead to cleaner water, that sequester carbon, that lead to more pollinators, that incorporate trees and other plants. That knowledge is out there. How do we get every farmer, everybody involved in farming, to be empowered to shift the system?

“The new IPCC report shows that climate change is huge and undeniable. I think farmers of every political background know it and talk about it. They might not use that phrase, but they know the climate’s changing and that it’s having a huge impact on food production—in Oregon and globally. We’re seeing farmers take leadership in climate action. They have to, because agriculture is 30 to 40 percent of our carbon emissions in the United States. And, in Oregon, somewhat comparable.

“I see a lot of agriculturalists who are innovating and would be ready if they just got a bit more financial and technical support. If they were empowered more, I think we could see our culture really turn.”

“Because I’m a land focused person, I think a lot about who has access to land and who owns it. It’s always been controversial and debated, and it’s a part of Oregon's history. In the 1800s, land was given away in the Oregon Donation Act at very low prices, taken from Native Americans and given to mainly White homesteaders. That’s a difficult history that a lot of particularly White Oregonian current land owners don’t necessarily want to confront. They struggle to make a living running their land now, so they don’t feel like they have a whole lot of privilege, and there’s some truth to that. Many of them do struggle.

“But I think the bigger question really is: who owns our farmland? Increasingly it’s corporations and investment companies. Investment companies have interests other than growing food for Oregonians, which is alarming to me, because if we care about our food systems, we have to make sure that people who care about us own the land, manage it, steward it, and have access to it.

“In the future, I would hope that we have more diverse ownership of farmland. By that I mean racially and socioeconomically diverse. Diverse farmers can connect culturally with different communities, and they also bring their own unique growing practices.

“As part of that, I hope more of Oregon’s Indigenous people have access to their historic lands for food cultivation. Another thing I hope is that we have permanently protected farmland.”

“A lot of Oregon's farmland doesn’t grow food for Oregonians. It grows products for the global marketplace, like grass seed and hay. That’s how farmers make a living. If they can steward their lands sustainably doing so, then that’s a good thing. But if we’re talking about Oregon’s food system, there are a lot of barriers currently—economic, global, trade, and others—that fragment our food system.

“I hope for a robust food system where eaters and growers—I’m not particular that it has to be a boundary around Oregon specifically—respect our local food system. We still might have trade with other places and eat other foods, but I hope that we Oregonians will have a connection. I think we do currently—I just ate some Hood River cherries and was really excited about them—but I think we can grow and expand on that.”

“It’s difficult for farmers to make a decent living. It’s difficult to access land. Labor is really expensive—those are people who deserve good wages. Inputs are expensive, and on the other hand, you often don’t make a lot of money selling food. That’s a reality that has to be addressed if we want farmers and ranchers to sustain.

“Globally, nationwide, and in Oregon, there has been a severe drop in the number of farms and farmers. Especially if you take out small farms that are making small supplemental income. If we’re talking about farmers that are making a living from it, we’ve seen a huge drop over the last four decades. So our farms are increasingly owned by a smaller and smaller number of people.

“Another question in food systems: Who’s packing the fruit boxes, who’s out there in that 115-degree heat wave tending the land? It’s often undocumented migrants. That’s a big part of who’s farming in Oregon. They’re not the land owners, but they're the ones really working the land. And especially with climate change and forest fires and pesticides, it’s vulnerable work, and low-paid.

By 2070, I hope when you go to an Oregon farm that there are birds and pollinators and healthy water and soil and food being produced. And I hope food producers have good livelihoods, and that they’re able to support their families and not feel stressed about paying a medical bill. Many farmers are capsizing under debt and living with the stress that comes along with that.”

“There is so much amazing community leadership, activism, intervention, and policy ideas in food work. Farmers and growers are some of the most creative people in the world, and really collaborative. At least that’s my experience.

“There’s all kinds of positive stories. The fact that Oregon has functioning farmers markets and urban agricultural educational organizations is really amazing. It’s a testimony to community leadership, support, fundraising, and interest. And the number and strength of those organizations seems to be stable or growing. I’m particularly heartened by the increasing visibility and hopefully support for Indigenous-led and Black-led food organizations. There are definitely Native-led food justice organizations in the Portland metro region that are talking about food—not just being able to grow food, but the historical and cultural connections and the power it has to be a source of healing for individuals and communities.

“From a policy perspective, there was some attention this legislative session—I’ll be honest, I’m not the most up on recent policy discussion at the Oregon State Legislature—but at the federal level, there has been increasing attention to racial equity in farming. I think there is momentum around policy change that is very exciting. And there’s flourishing urban agriculture, and that’s exciting.

“Some urban farmers grow their food just to have a tasty tomato, or to supplement their grocery-store shopping, or because they enjoy it. But others do it as a way to build communities by growing culturally specific foods. Some of the gardens, such as Growing Gardens in East Portland, have a lot of refugee gardeners, so it's a really important kind of cultural connection.

“I think a lot of folks recognize urban gardening as a political stance, too. Like, we want more fresh food and can’t get it at a lot of grocery stores, so we’re going to grow it ourselves. It’s like an individual sovereignty or power movement. I hope that movement continues to grow.

“Farming is so much more than food. It’s the tie to cultural land that I think all of us—to use a food reference—are starving for.”

Dylan Jefferies is a journalist based in Oregon. He is a recent graduate of Portland State University and was a 2021 reporting intern at The Bulletin in Bend through the University of Oregon’s Charles Snowden Program for Excellence in Journalism. He served as editor-in-chief at PSU’s student-run newspaper, Vanguard, where he was the recipient of multiple Oregon Newspaper Publishers Association awards and the Wilma Morrison Scholarship for Excellence in Journalism. In his spare time, he enjoys reading novels and exploring his home state of Oregon.