Neither Here nor There

How struggling to fit in both in Bend and Indonesia pushes an educator to challenge assimilation. 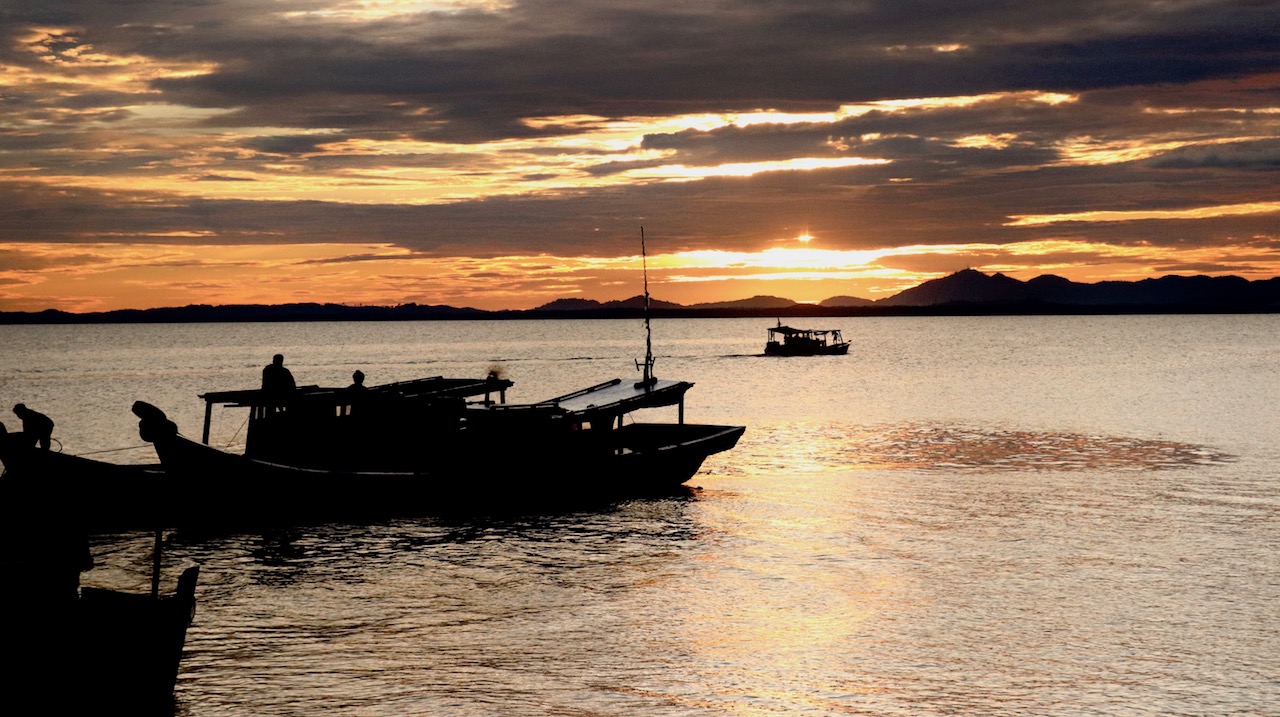 A sunset in Bangka, Indonesia during the author's stay. Photo by Kiki Nakamura-Koyama

On the window of my homeroom in high school, an unnecessarily large sticker read, “ADAPT OR DIE.” In education we call this hidden curriculum, a way in which educators unintentionally transmit values that can replicate existing and potentially harmful societal norms. “Adapt or die” suggests that I am required to break myself to fit preexisting norms predicated on white society in order to not just fit in, but to merely survive. It took me a college education and a year away from the United States to realize “adapt or die” was antithetical to the diverse reality of the country.

What does it look like to be a fully adapted American? I can’t change my eye shape nor the history that haunts my family. Despite the United States priding itself on diversity, three generations of my family were forced to conform to “American” standards. I don’t speak Japanese because my family’s vocal chords were ripped out in Japanese incarceration camps, where they were made to be afraid of speaking the “enemy’s” language. I don’t eat Japanese food because until two decades ago, Japanese food wasn’t fashionable, it was gross. And I don’t have Japanese heritage because my elders were too busy breaking their backs on Oahu’s sugar plantations and in Wyoming’s coal mines.

Despite the loss of my family’s language, food, and heritage over the past century, I am still unable to fit in. My middle school classmates managed to racialize my tuna fish sandwiches; a popular, older snowboarder posted on my Facebook page in middle school, “I like Japs”; a local museum changed my ethnicity from Japanese to Chinese in order to make me fit their living history role better; a friend drew a caricatured portrait of my face, buck-toothed and slant-eyed, and passed it around my IB English class; I was told, “you’re pretty for an Asian.”

Later, when that phrase along with an image of my face went viral during the #thisis2016 campaign that raised awareness about racism against Asian Americans, a white troll wrote in the comments, “lol you’re not even pretty for an Asian.”

Over a lifetime of maladapting, my family’s mental health deteriorated; finally, my sixteen-year-old sister committed suicide and took with her my heart. Our schools, community, country provided us with two options: to adapt or die. We failed to adapt, so we paid. My family has been contorted imperfectly into an American box, and people call that resilience.

I left the United States because the only thing I could write on my Tinder profile was “queer and fourth generation Japanese American.” The only word I could describe myself with was “critical.” I left because I was exhausted by the boxes that I was put into both by other people and myself. My bones felt tired of trying to break themselves so that I could adapt to my surroundings. I received a grant from the US Department of State, packed two bags, and traveled to Indonesia equipped with the knowledge that it was culturally, religiously and linguistically disparate, Muslim-majority, and hot. I hoped for something different; I hoped to be recognized as a human, with all the nuances, contradictions and inconvenient shapes that people come in. Placed on Bangka, a Chinese-diaspora majority island, I was elated to be surrounded by others who had slick, straight, black hair. It was the first time I wasn’t read using Asian stereotypes. However, as my time in Indonesia continued, I realized that while my white peers from the United States were laughed at when they made mistakes, I was ridiculed; I realized that my white peers were affectionately called bule and I was called aceh or when suspect orang asing. I was frequently mistaken as Chinese Indonesian, a minority group in Indonesia that was the target of the May Riots, a nationwide massacre in 1998. Throughout the months I was given many identities, but none of them included LGBTQ+ or American.

In an attempt to escape disappearing into a false identity, I bleached my hair blond to challenge the borders of what it means to be American and Asian. Bleaching did not do any of this. A few hours after posting a photo of myself with blond hair on Instagram, one of my closest guy friends in Indonesia called me on WhatsApp wanting me to know that I looked like a whore. When I asked if he would think the same way if one of his bule friends dyed their hair blond, he admitted, no.

I physically blended in so well in Indonesia that I was destined to fail to fit the societal norms built on colonialism and collectivism, the latter a principle my family abandoned for American individualism generations ago. As it turns out, adapting fully in any culture is a privilege that I don’t have. It is my plight as a perpetual foreigner. The difference between my inability to fully blend in in Indonesia and my inability to fully assimilate in the United States is that I am an American citizen. I am supposed to belong. “Adapt or die” suggests the individual must adapt to their new surroundings. I cannot just become Indonesian because I share similar facial characteristics and I cannot become white just because I live in America. The message of the red sticker that remains plastered to the side of that classroom in Bend, which is 92 percent white, has consequences.

I’m still trying to save my sister’s life by giving her another option. As an educator, I have vowed to teach curriculum that does not demand a young person change, but empowers young people to demand change. Paulo Freire writes in Pedagogy of the Oppressed, “Education either functions as an instrument which is used to facilitate integration of the younger generation into the logic of the present system and bring about conformity or it becomes the practice of freedom, the means by which men and women deal critically and creatively with reality and discover how to participate in the transformation of their world.” Those words, by the way, are posted on my classroom wall. 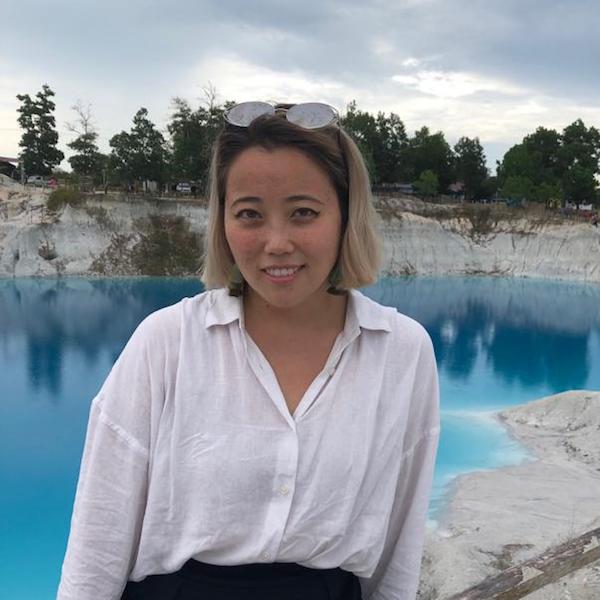 Kiki Nakamura-Koyama graduated from Bend Senior High School in 2013 then moved across the country to attend Bowdoin College. She completed a Fulbright in Indonesia last year. She believes in attaining collective liberation through culturally responsive and antiracist education. Kiki is currently a 9th grade English Language Arts teacher in Cambridge, Massachusetts.

Kiki Your powerful words moved me to reach out to you. You have grown into a woman with the power to change others. I was so sorry to hear about your sister and hope you know that I truly ache for your family’s grief. I wish you the best on your life path and hope you can find positivity in your teaching work. With warmest regards, Allyson Hamlik

Thank you very much for this insightful article. My name is Jerry Yoshitomi. I was born in Milwaukie, Oregon in 1948. My father, Jack Yoshitomi, was also born in Milwaukie. My mother, Kaory Kimura, was born in Fife, outside of Tacoma. Your brilliance exceeds your age. I look forward to reading and supporting your future thinking and writing. I served as the Executive Director of the Japanese American Cultural and Community Center in Los Angeles from 1981 through 1998 and have four decades of experience in non-profit arts administration. I would be honored to engage in further conversations with you, either by email or telephone.

Thank you for the extraordinarily moving essay. I hope that it will be read carefully by many. And welcome back to New England!

I have had the good fortune to have met Kiki at Bowdoin. I must comment on this article she has written: This is a beautifully written sad and hopeful story. And the hope that the writer brings with her new profession - that of a teacher offering the gift of knowledge that brings freedom and enlightenment - is proof that she has already accomplished what she has set out to do. Nothing I can say can right the wrongs that people do to each other, other than to commend her for the life and profession she has chosen to try to counter our provincial narrowness. I am also so sorry for her loss and her family’s loss. Nothing I can say can make that better either. But she has done much to honor her sister in her own life. Best to her and may she continue to make a difference. We should all be so caring.

Thank you, Kiki, for sharing your story, for your care, and for your work.