How will tribal communities in Oregon remember the COVID-19 pandemic? 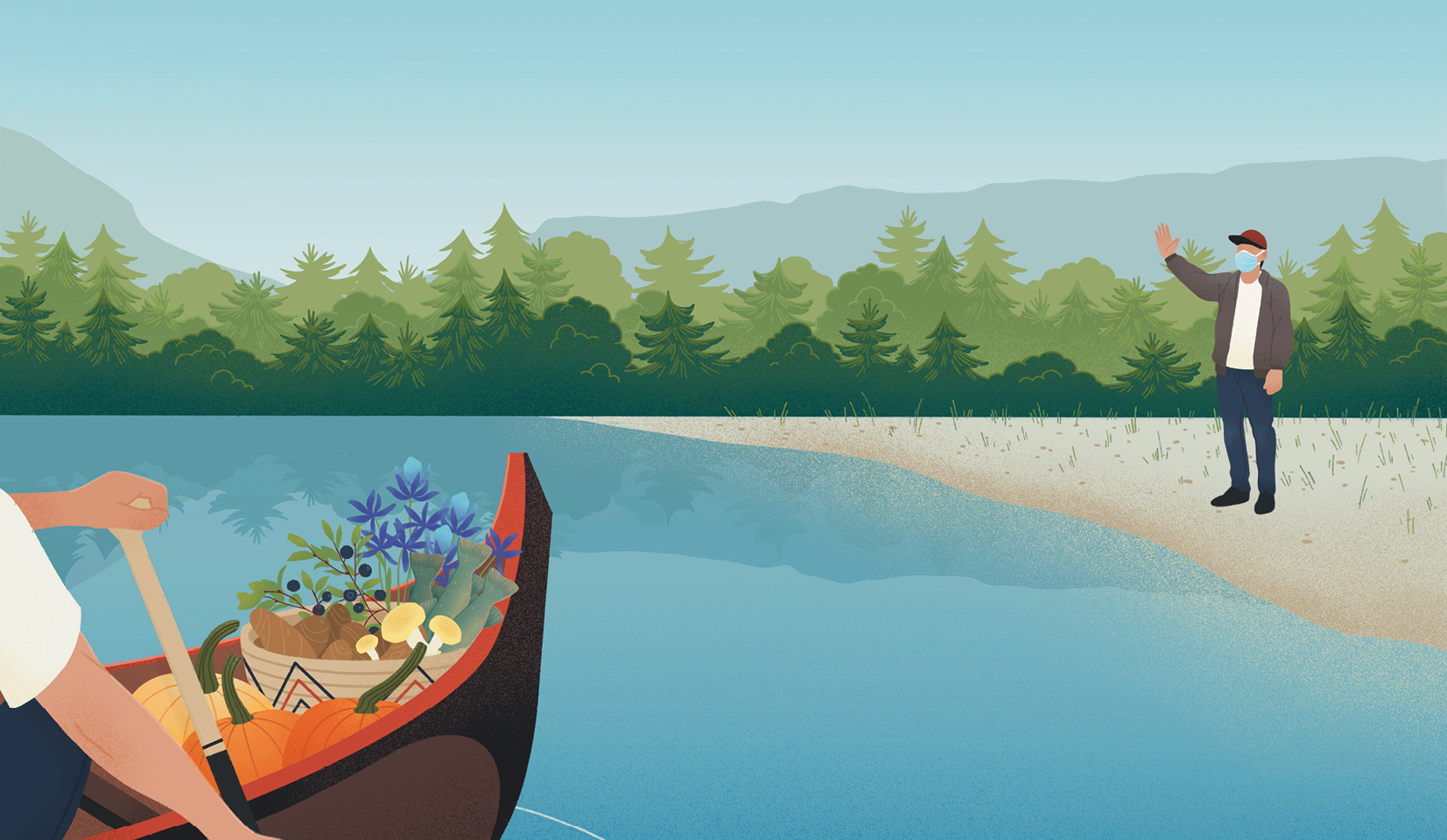 “We go over to Warm Springs to clean graves a couple of times a year,” Shirod Younker, a Coquille/Miluk Coos/Umpqua artist and educator, tells me. “Going with my father-in-law to his family’s plot, he’d always make sure to take us to one area with the oldest family and point out this grave that had no marker.”

In the unmarked grave lie the bodies of eleven children. Younker and his wife, Direlle Calica, a Confederated Warm Springs tribal member, surmise the children died around the time of the 1918 influenza pandemic: the grave markers around the unmarked mound are from 1916 and 1920, with none from the years in between. Younker says Calica’s father, the late Charles “Jody” Calica, who had served as CEO and secretary-treasurer for the tribe, told him that at the time the grave was made, kids were dying too fast to receive a proper burial.

“You can still see the mound for that grave,” Direlle Calica says. She is an attorney and director of Portland State University’s Institute for Tribal Government. “It’s next to the grave for my Indian namesake. He would tell us to take care of it.”

Over a century later, we are now more than two years into our own deadly pandemic. Governor Kate Brown’s lifting of the statewide mask mandate on March 19 signaled, hopefully, the beginning of the end of a devastating ordeal. As we look toward the future, the question arises: How will tribal communities remember the COVID-19 pandemic?

For tribal communities in Oregon, the pandemic has not only meant the postponement of traditional root feast celebrations, which reaffirm tribal members’ connections to the land and the first foods that have sustained them as a people for thousands of years, but also the loss of culture bearers.

In an interview in Street Roots, Jermayne Tuckta, an archivist at the Museum at Warm Springs and a part-time teacher of the Ichishkíin language, estimated that there were between ten and twelve fluent speakers of the language before the pandemic hit in 2020. After two years of COVID, he said, only four survive. Traditionally, he noted, the passing on of culture has impacts that go beyond the grave.

Diane Teeman, cultural and heritage director for the Burns Paiute Tribe, says the isolation required by the pandemic affected the tribe’s language program: “Communal meals and conversation are integral to the wellness of our people and language,” she says. “The pandemic caused the physical separation of our households and we had to look for alternatives to keep moving forward in our language revitalization efforts. We were able to continue, but we also lost elders, Paiute first-language speakers, during the darkest days of the pandemic.”

Teeman says the language program adapted by helping families travel to language events and visit cultural landscapes as household units. As COVID infection rates in Harney County have fallen, the tribe has begun to reinstate in-person events. “Despite the adversities COVID-19 brought, we found ways as a tribal community to overcome,” Teeman says.

Memories of past trauma are embedded, even if they aren’t explicitly passed on. They are embedded in the cemeteries, where clues are found not only in what is there but what is not there. They are also embedded in cultural protocols, like those used in the canoe journeys that have enjoyed a resurgence in the past thirty years, with canoes from tribal nations across the Pacific Northwest traveling vast distances to gather in one preordained community each year.

“When you go from community to community, we will pass by with our canoe to show that we are friendly, then bring our nose to shore,” Younker says. “One person will then go to shore and ask to go ashore. Someone on shore will grant permission as long as you agree to share your songs and stories, and they will give you a place to camp and feed you.”

Younker now realizes these protocols of respect also allow the person greeting the canoe to warn incoming boats that there could be sickness. He believes that’s where that protocol comes from, historically.

“We grew up without a pandemic,” he says, “and we don’t realize how important that is.”

The Tribal Canoe Journeys have been postponed due to the pandemic for the past three years. Smaller canoe paddles returned this summer: the Gathering of the Eagles in the San Juan Islands in May, and the Sinixt Homeland Paddle on the Columbia River in June. In 2023, the Tribal Canoe Journey destination will be hosted by the Confederated Tribes of the Warm Springs Reservation. This will be the first time in twenty-three years that the canoes’ final destination will be in Oregon.

Living in an urban area and unable to access traditional foods the way she was accustomed to, Se-ah-dom Edmo (Shoshone-Bannock, Nez Perce, and Yakama), the executive director at Seeding Justice, a philanthropic organization headquartered in Portland, decided to start her own business in the middle of worldwide lockdown.

When restrictions imposed by the COVID pandemic made the world smaller, Edmo found that her relationship to traditional foods and her memories of the sharing and harvesting of those foods led her to think about how to increase accessibility to them. She created Indigenize, a network that connects consumers with tribal and Native-owned businesses to support tribal peoples’ food sources, such as fisheries.

“The first boxes that I made were for NAYA [Native American Youth and Family Center, a Portland nonprofit organization]. A board member made me make boxes for all the volunteers that came to their vaccine clinic.”

The boxes included coffee, tea, honey, and chocolates that she sourced through her ongoing work with the Intertribal Agriculture Council, a national organization based in Montana. The lockdown served to remind her of what was essential.

“The colonial extractive economy is so damaging to us,” Edmo explains. “We have a system of racialized capitalism that is always taking from our communities. We need to run our businesses in a way that upholds tribal sovereignty.”

She has connected with a restaurant in Gresham that now makes pancakes using flour from the Red Lake Ojibwe Nation in Minnesota and offers maple syrup from the Passamaquoddy Nation in Maine and Ontario, Canada.

Edmo plans to enter her first pitch competition soon. She is working with Zenger Farm, a nonprofit organic farm in Portland, to offer subscription boxes that feature food and products from Native nations.

Edmo sees potential to expand Indigenize beyond food and into other products, even office furniture. “If you make desks, where are you sourcing your wood? There is a consumer market now,” she says. “The conscious consumer is a growing market in the US and the world. It’s needed because we have seen what extractive racialism has wrought.”

As the time of enforced isolation draws to an end and Native people look at getting out more, the memory of who we have lost and what we have been denied is driving both invention and a deeper understanding of what our ancestors knew.

The Calica-Younker family lost their father/father-in-law right before the pandemic began and could not hold a memorial for him. They saw how the virus spread when people gathered. When funerals were held at the Yakama Nation and tribal members traveled from Warm Springs to attend, these turned into spreader events.

So too did celebrations: In April 2020, Toby Patrick, a member of the Confederated Tribes of the Umatilla Indian Reservation (CTUIR), held a root feast at his home on the reservation in defiance of tribal edicts forbidding large gatherings. When he and sixteen other defendants were cited for violating these orders, Patrick told the Confederated Umatilla Journal, he decided to “stand on the foods” and plead not guilty, telling the Umatilla Tribal Court that he and the other attendees did “everything we could under the guidelines, but still be who we are and do what we’ve been taught.” The judge acquitted all seventeen defendants of all charges.

The dangers of such a gathering were real.

“[COVID] came down and it really hit the elders really badly,” Younker says. “We had this push and pull; some were ignoring certain protocols because they are grieving, and it was really hard.”

He notes that some pushback against the tribal council’s COVID restrictions came from younger people. He hopes they come to realize that precautions are also “our traditions forever.”

When Younker and Calica go to the graveyard in Warm Springs now, they see a lot of new graves, some of them for people they knew. The tribe instituted stringent rules to halt transmission, but the neighboring White communities were hostile to these rules.

“Drive fourteen miles into town and you’ll see non-Indians complaining about masks and calling Indians racist for putting up signs requiring them and saying it was a hoax,” Younker says. “Navigating that anger was difficult at the beginning.”

The non-Indians now share some of that communal memory with their Native neighbors. And yet, their understanding of the present and the past can remain stubbornly opposed to that of the tribes whose lands they presently occupy.

“We are continually losing elders. All of that wisdom is gone,” Calica says. “You never know when that is going to happen. I used to joke we are elders in training. You gotta go with what you know.”

This year, the root feast is back and is being hosted jointly by CTUIR and the Nez Perce and Colville Tribes. It is being held on the recently returned ancestral lands of the Nez Perce in Wallowa, Oregon, and is called the 2022 Wallowa Gathering Event. The feast shows that the First Nations of Oregon are not gone, and neither are their foods and traditions.

Jacqueline Keeler is a Diné/Dakota writer living in Oregon. Her 2021 book, Standoff: Standing Rock, the Bundy Movement, and the American Story of Sacred Lands, was called “an eye-opening narrative of two standoffs with the US government” by Kirkus Reviews.

The Eternal Fire: Standing Rock and the (re)Awaking of Dreams

Artist, musician, and folklorist Si Matta writes about the dreams that led him to Standing Rock in 2016.

Bija Gutoff writes about seeking serenity among old headstones after the sudden death of her father.

An excerpt from Jacqueline Keeler's book Standoff contrasts the standoffs at Malheur and Standing Rock.