Scientists, activists, and government officials are working to bring beavers back to the Cascade-Siskiyou National Monument. 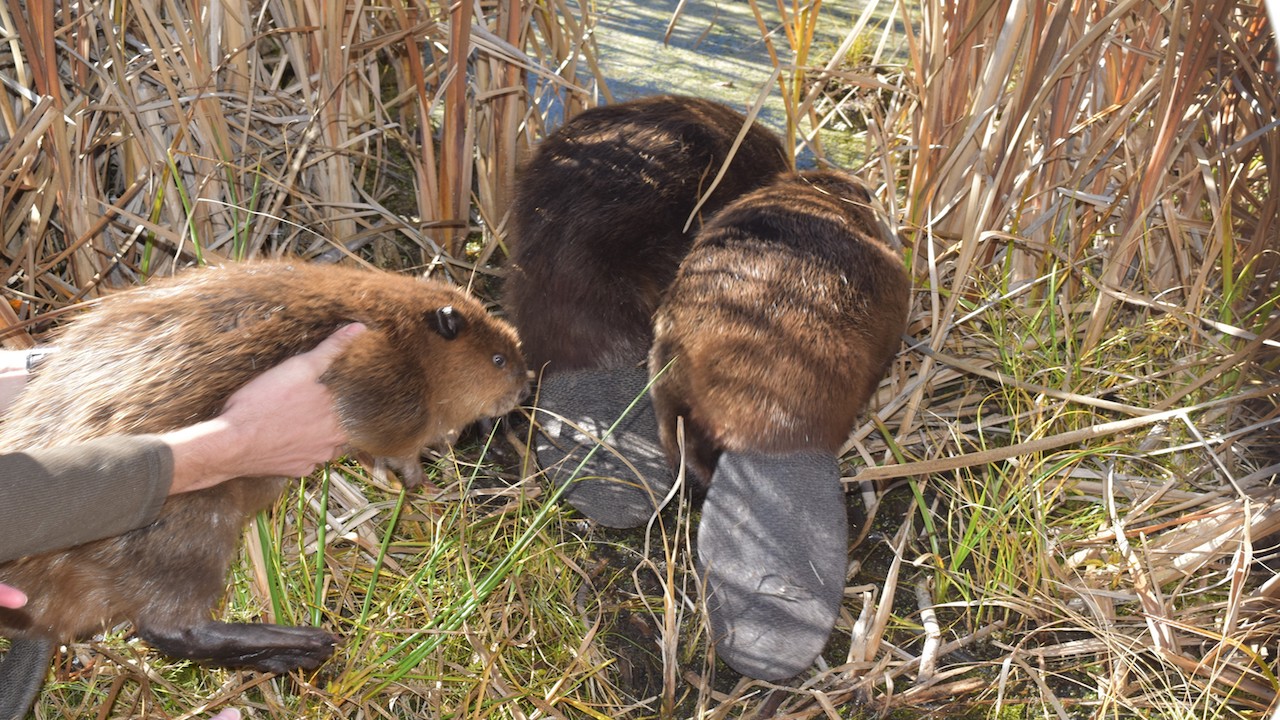 In 2019, a small group of biologists trekked to a shallow pond in the Cascade-Siskiyou National Monument carrying heavy burlap bags. Jakob Shockey, executive director of the Beaver Coalition, set his bag on the ground, and out popped a beaver. Docile, soft brown, and surprisingly large, it waddled toward an opening in the reeds and slid into the water, suddenly graceful. The group watched hopefully as the beavers, all rescued from the same suburban field in Medford, explored their new home.

The pond, one of the Parsnip Lakes, is also home to a rare amphibian called the Oregon spotted frog. The frog needs open water to lay its eggs, but since beavers were trapped out over a decade ago, the pond had been leaking water, and cattails were taking over. The biologists hoped this relocated beaver family would reverse those trends.

It’s hard to believe that such an unassuming creature can shape entire watersheds. Beavers and their constructions impound, clean, and slow the flow of water; fix eroded banks; create habitat for fish, birds, and bugs; and even mitigate climate change.

With the Beaver Coalition, Shockey and his partners hope to drive this message home, in part through storytelling and demonstration projects on a variety of lands—private and public, urban and rural, ranch and forest.

“Our goal is to help facilitate a paradigm shift in how people interact with beaver,” says Shockey.

Thanks to a cooperative agreement between the Beaver Coalition and the Bureau of Land Management, Shockey is working with ecologist Charlie Schelz on a plan to “re-beaver” the Cascade-Siskiyou National Monument in southwestern Oregon. A convergence of three mountain ranges has created a tapestry of landscapes in the region, from cool north-slope forests and sunny oak savannas to spring-fed meadows and rocky scarps. Although the monument is biologically diverse, its lands are not pristine. Beavers, once abundant, now persist only at the fringes, and as a result, many wetlands have dried and degraded.

Fredenberg Meadow, on upper Jenny Creek, at the monument’s eastern edge, is a case in point. Just a few years ago, it was a verdant wetland with a complex system of beaver dams, ponds, and burrows. Inexplicably, the beavers disappeared.

“We call it the ghost town,” says Shockey. “All of their canals and their old dams are still evident across the landscape, but it's all dried out. Why did they all disappear? And what could we do to get them back?”

As a first step, Schelz and Shockey have identified high-priority sites.

According to Schelz, “The objective is to put in 'beaver dam analogs' and other structures to back up the water a little bit.” They will also sow beaver food plants and those that attract pollinators. “If we can get good healthy bug populations, everything else kind of follows,” says Schelz.

The strategy is refreshingly simple, and no heavy equipment is required.

“There's still a need for restoration because a lot of the streams are so degraded that beaver can't gain a foothold,” explains Shockey. “It’s about getting together as humans to assist the true wetland professionals.”

Vesper Meadow, an upland meadow at the Cascade-Siskiyou crest, on the northern edge of the monument, is privately owned, with a history of logging and ranching. Cory Ross and Greg Conaway, the current landowners, have entrusted over 300 acres of their property into a conservation easement with the Southern Oregon Land Conservancy. Jeanine Moy, director of the Vesper Meadow Education Program, is working with the Beaver Coalition to set the stage for the beaver’s return.

Vesper Meadow was once managed by Native people—likely the Latgawa—and by beavers. But a series of disruptions—grazing and logging, weeds and water diversions, beaver trapping and the removal of willows—has transformed a wet meadow into a dry one. A once meandering creek has steepened and straightened. To mitigate that, Moy and her partners have begun taking down fences, pulling weeds, and planting willows, which beavers eat.

In 2022, in the short window of time allowed to protect fish, she hopes to install three dozen structures that mimic beaver lodges—what Moy describes as “messy assemblages” of small trees pinned to the channel with posts. The structures will trap debris and sediment. Over time, the banks will soften. Meanders will form. A process will be set in motion.

“Our restoration strategies are much more about restoring function and presence,” says Moy. “I really see the success of this project being measured by beavers coming back.” First, Moy and her partners must navigate regulations. They had to apply to the county for a floodplain development permit for the post structures. An engineering analysis, which ate up a good chunk of grant money, concluded the project wouldn’t meet county requirements for flooding and prompted additional applications to FEMA to remap the floodplain so it would be more accurate.

Requirements such as the engineering analysis have a “chilling effect” on restoration, says Shockey. “It’s really hard. But we’re along for this story, and we’ll be able to show what [the process] looks like for private land.”

The challenges Schelz confronts on public land can be equally frustrating. Cows and horses elude cattle guards and stomp sensitive creeksides. And then there’s the red tape. His project with the Beaver Coalition has been approved, but he must apply for funding each year. If an application languishes on someone’s desk, the money evaporates.

The beavers Schelz and Shockey relocated to Parsnip Lakes in 2019 didn’t stay. Maybe they were trapped (Schelz is lobbying for a monument-wide beaver trapping ban). Maybe they were eaten by cougars. Maybe the early snow shocked them downstream. But that same year, Schelz and Dr. Michael Parker, the biologist who first discovered Oregon spotted frogs in the pond, built some low-tech structures there. They cut willows and dogwood branches and drove them into the ground at the pond’s outlets. They wove more branches around the posts. The branches sprouted and grew. The water level came up and stayed up, even during last summer’s soul-crushing drought.

Schelz is optimistic that beavers will eventually thrive there. He says, “If we create the right conditions, the beavers will come."

Juliet Grable is a freelance writer based in the Greensprings, a rural mountain community in southern Oregon.

We own a little over 800 acres of contiguous land in Wolf Creek. We have two creeks which feed into a wetlands, into a lake which then spills into Wolf Creek. We bought the land from the SOLC with a conservation easement. We would be happy to see if we can be a part of the restoration of the beaver population. We have seen many animals using the waterways from otters to black bears to mountain lions. But never have we caught sight of a beaver. Please let us know what we can do to be a part of what promises to be a mutually beneficial project. Thanks

What can be done to keep the cattle out of Fredenberg Meadow?

How to I contact Jacob Shockey of the Beaver Coalition. I’m writing a book on the Klamath Watershed and would like time with him to talk about their projects and the coalition. Ron

This is a wonderful, timely article with significant implications. Repopulating Western U.S. uplands with beavers would be a smart, nearly free way to mitigate the effects of climate change. As snowpacks shrink, beavers could sequester huge volumes of water at higher elevations ... way more that you might imagine for an unassuming but industrious rodent. But a dense tangle of federal and state regulations, along with a deep-seated cultural misunderstanding of our relationship with natural ecosystems, stand in the way. FEMA is essentially dedicated to climate denial in the form of misplaced flood insurance programs and related flood plain policies. Basically we are looking at a hugely important missed opportunity.