A student reckons with an inappropriate teacher’s power and her own powerlessness. 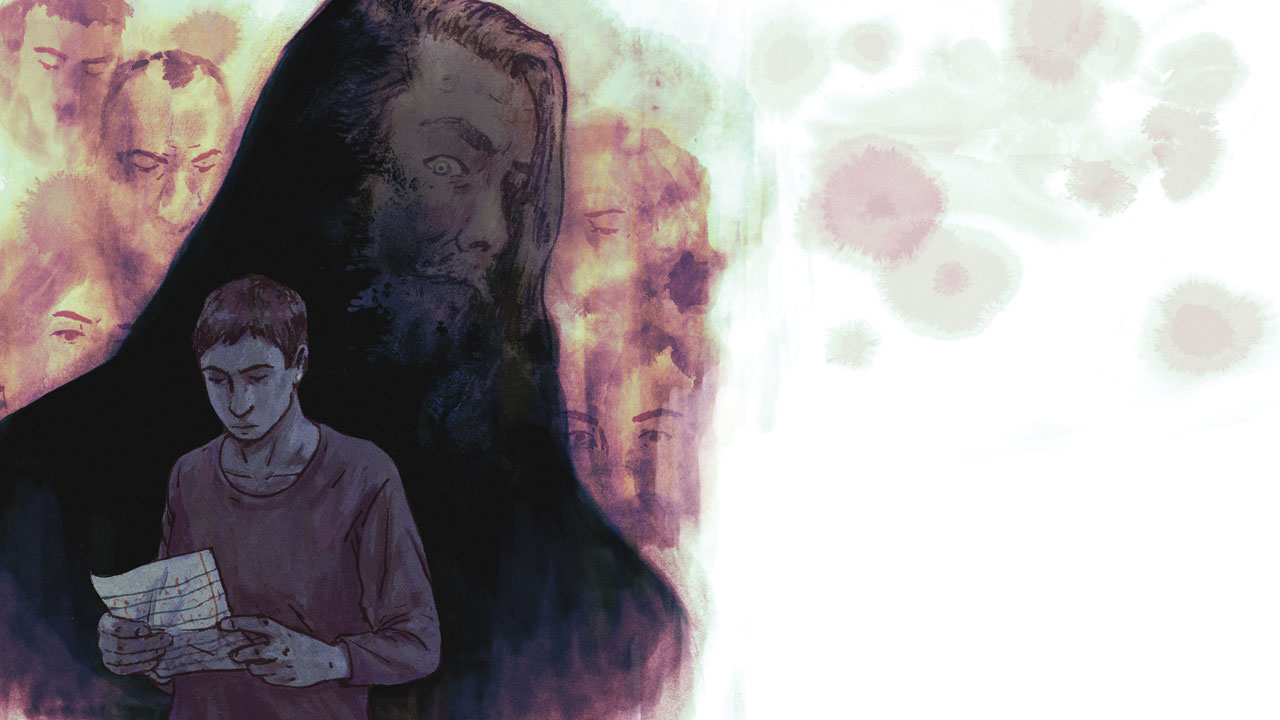 I am eighteen. The letters are handwritten in red ink, on lined paper. Every letter of every word is capitalized, the handwriting slanting to a hard right, so uniformly erect it resembles font. I turn the pages over. The writing is double-sided, each letter three to five pages long. Precariously, they balance in my hands. The paper is thin, light peers through, but the pages sit heavy, sticky, warm like blood. A cool bitterness floods my mouth and spreads through my torso.

The letters are from my IB Psychology teacher. He writes that I’m a manipulative little girl too smart for her own good. Somehow, he’s gained access to my schedule and calls me on classroom phones while I’m in English, Calculus, Biology. He times it so that the phone rings just as I enter the room.

“I’m recording these calls,” he says.

During class he cracks lewd sexual jokes, regaling us with stories about himself gallivanting around town with his numerous female partners, some hired, some “kept.” An avid patron of Patpong and its red-lit buffet, he has long salt-and-pepper hair down to his shoulders and a handlebar mustache he strokes often, lovingly, like a soft, furry pet. He tells us “(he) enjoys (his) women young.”

He flirts with female students. Some flirt back, feeling chosen and special, perhaps too, fearing if they didn’t respond to his flirtation, he’d penalize them with poor grades. Most of the male students idolize him as the epitome of “cool.” They frequently request his advice on women.

I’m the only student who doesn’t laugh along, who never responds to flirtation, who refuses to pander to his ego. Occasionally, I raise my voice above the chatter to say, “That was inappropriate. You’re an authority figure. You’re abusing your power.”

In his letters and calls he doesn’t commit an overt sexual advance. He is shrewd. He repeats, “You have misbehaved. You’re an insolent girl. How dare you disrespect me. It pains me that we don’t connect. You deserve to be punished.”

The innuendo is identical to the language he quotes using with his many girlfriends.

In one letter he writes, “You think you are so perfect. That face. That body. Perfect grades, too. Well, then, you need to make me happy.”

I read the words and fill with chills. He’s alluding to an annual contest held by the school newspaper. At the end of every school year, students vote to elect one another for different “awards.” Since freshman year, I’ve won “Best Body,” “Best Smile,” “Most Likely to be Famous,” and “Most Artistic.”

He has been tracking me. For years.

Therefore, although nothing explicit, this is entirely sexual. Control. Hunting. Intimidation. Power.

I report the letters and calls to the high school principal. My legs swing on the office chair, unable to touch the floor. The plastic back of the chair is cold and hard against my jutting shoulder blades, backbone, tailbone. I fiddle with an earring, pat my hair in place. It’s dark brown now, no longer spiked, but still cropped short. The principal listens intently. A large man with thinning auburn hair who also coaches our rugby team, he seems kind. I do know, though, that he is chummy with the predator. Part of a “boys’ club” of male colleagues, my friends and I see them sometimes in Silom, laughing over Singha beers.

I finish listing and explaining the best I can, making sure to keep my voice clinical, flat, emotionless, lest emotion be held against the veracity of my words.

“Thank you. Would you like to involve your parents?”

I reply with the plainest truth: “No. They are unavailable.”

“I’ll take care of it,” he says. We schedule another meeting for the following day. He requests I bring all the letters. I’ve stored them at home.

That evening, I approach Papa.

“The principal may call. A teacher is stalking me. He calls and sends letters.”

Papa looks at me, frowning. “Kano? Thumi kee korso?” Why? What did you do?

I hold out the letters. He looks. His upper lip curls in disdain. He shakes his head and returns to his newspaper.

I feel tiny, devastated. Stupid girl. Seek not a father you won’t find. When Momma asks for details, I give her everything. She replies with silence. I respond, “I’m handling it.”

The next day, the principal asks, “Can you think of anything that may have provoked this behavior?”

I blink, surprised. Why do any of us do anything? Because we want to.

“Maybe this makes him feel important.”

The principal nods slowly. He scribbles on his notepad. He skims the letters. He places them in a locked drawer.

Then I remember: the predator gained access to my schedule, meant to remain confidential.

“We’ll take care of this discreetly,” says the principal, leaning back in his chair, braiding his fingers over his gut. “Thank you for being quiet. You may return to class.”

I flush with horror and outrage. The architecture of this dungeon is elaborate. Systemic. The principal hasn’t taken the letters for safekeeping; he has confiscated evidence. Now, I’m to return to the monster. I leave the office. I feel like a stain. Not an ink stain from a split pen. Not a grease mark from food or the indigo left by blueberries. I’m the brown, scourged, but still-visible stain of blood on a panty when you have your period and it leaks through a tampon. I feel like a stain only girls know.

I return to class, repulsed, furious. He smirks, stands a bit taller. He shakes his gray mane and touches his mustache adoringly like a penis.

When I arrive home, I go to Nana Bhai and lie down carefully on his bed. He is sleeping, his breathing a wheeze, sour, stale, like bread slowly hardening, the yeast growing wild. I watch the sun set behind the crater in his thigh, created by cancer’s wrath.

How I wish I could decide who to live, who to die.

Power only responds to power. I have none. The predator is protected. I am a stain, initially irksome, ultimately forgotten. He will spend the rest of the school year mocking me to the other students, saying I fabricated the whole story due to a girlish crush. At the end of the year, he announces he’ll take a leave of absence. He’s honored with a glowing article in the school paper celebrating his years of gracious service.

Although enraged, I’m not surprised.

Last year, I visited Egypt on a school trip, during Week Without Walls. Every minute, I could feel something perched on the periphery of my senses. I sought words, like trying to recall evasive lyrics.

The thing was absence. The ominous absence of women. Their presence, their voices, their imprint. Droves of men unspooled through the city. Rolling coils of heat. My vision was thick with men. But try as I did, I failed to see a woman. When I finally caught sight of a few, like rare, endangered birds, they were frantic, hurrying, dodging groping hands and wolfish voices. It was a population forcibly halved, one half free to walk, the other living their days behind firmly closed doors.

It is similar in Bangladesh. In both places, I felt—I feel—powerless. Were I to act or speak back to any catcaller or grabber, I’d incur harm. The only choice is to layer clothing, keep quiet, tuck down my head, and walk as quickly as possible.

In Thailand, the air throbs with the promise and easy procurement of sex. I walk holding my limbs close to myself. Here, there is a coming-of-age ritual performed by fathers and sons. When it is time, the father buys his son his first prostitute. A passage into manhood, this tradition is upheld by select men in every social class and has continued for generations.

It is not far from home. Anyone’s home. From the red-light district to the red carpet, from pageantry to pimpdom, we have a tried-and-true pattern. A young girl, garishly visible yet rendered invisible, speaking, dancing, waving to the orders of male authority. Her voice usurped, her body itemized, her skin tattooed by the male gaze, her story written by the hands of others.

Everywhere I look, everywhere I go, being female means varying degrees of powerlessness.

It won’t be until I am half a planet and a dozen years forward that I’ll feel the full bloom of dissonant chords. For now, the days race and my riotous outcry burns my tongue. I can’t find anyone on whom to confer my unrest. So, hour after hour, I talk to you. Journal after journal, I transcribe my howl. I read, nourishing myself with the comfort of others. I scour every shelf I come across, in every home, bookstore, library, searching still for that singular book I’ve longed for since I was a child.

Excerpt of “Stand” from I Am Yours by Reema Zaman, copyright © 2019. Reprinted with the permission of Amberjack Publishing. 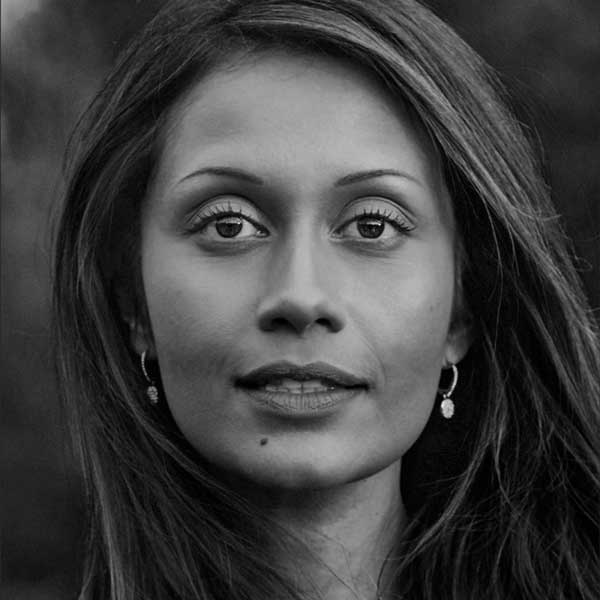 Reema Zaman is an award-winning author, speaker, and actress. She was born in Bangladesh, raised in Hawaii and Thailand, and presently lives in Portland, Oregon. She is Oregon Literary Arts’ 2018 Writer of Color Fellow. Her essays have been published in the Guardian, the Rumpus, Narratively, SHAPE, VIDA, and elsewhere.