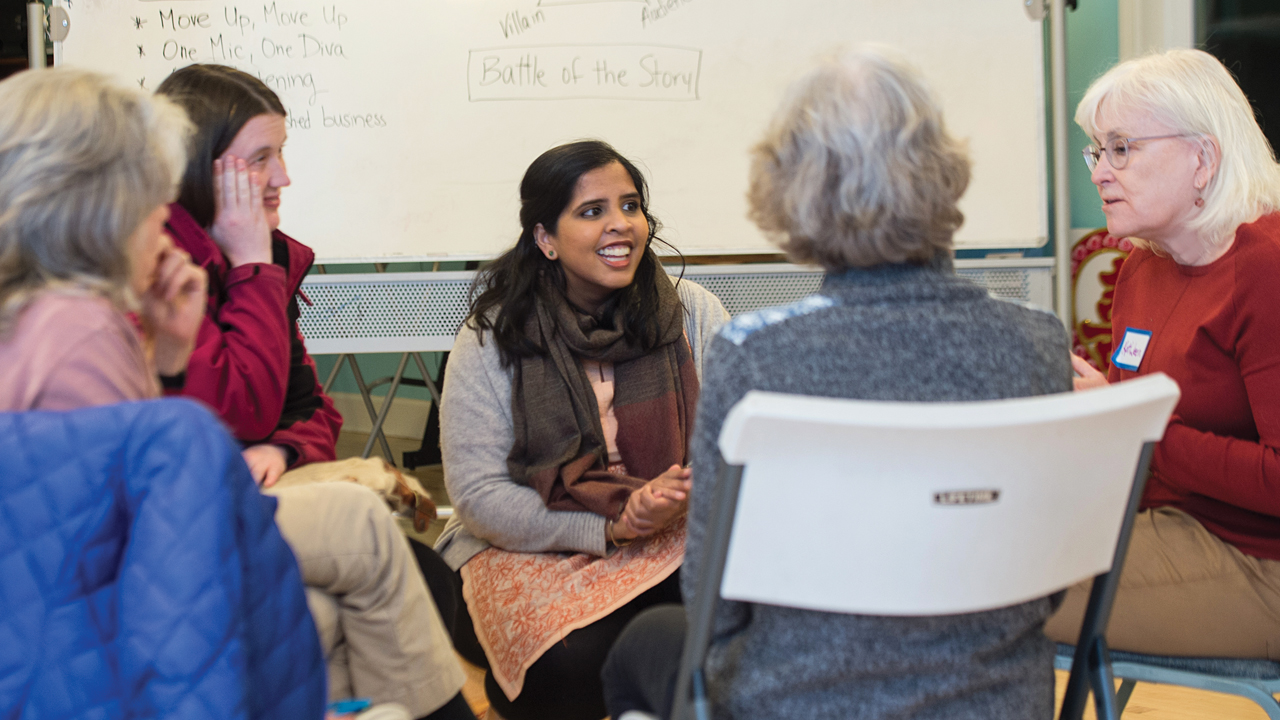 In the time since she became a Conversation Project facilitator, Surabhi Mahajan has led programs in more than a dozen communities across Oregon, getting people talking at community colleges, museums, and libraries from Port Orford to Ontario.

The first conversation she facilitated was at the Tamástslikt Cultural Institute near Pendleton. Mahajan, who grew up in Salem and attended Willamette University, had never traveled beyond the Cascades before.

“I had never been that far east,” she says. “I was scared. I didn’t know if they were coming in with a preconceived notion of the topic. But they were great.”

When Mahajan first applied to lead her program “What Is Cultural Appropriation?” in 2017, she was drawn to the The Conversation Project's goals of bringing people together to talk across difference and the opportunity to use the public speaking skills she honed in high school and college. She was also drawn to the pay.

Facilitators for the Conversation Project are compensated modestly, earning $250 for each program they lead. But Mahajan was an AmeriCorps volunteer working in food banking at the time, so even modest pay was appealing. “I was looking for different ways to get involved—and kind of make money, too,” she says.

Many conversations later, Mahajan says she has enjoyed the work much more than she expected to. “I never thought I was going to like talking about cultural appropriation so much,” she says. “I thought I was going to have to lecture and defend the idea a little. But I’ve never had to do that. People who seem like they’re resistant tend to open up to a different viewpoint by the end.”

This year, Mahajan debuted a second Conversation Project program, "Hunger in Our Communities," which draws on her AmeriCorps experience to encourage participants to think about the roots of hunger in Oregon.

“I want to talk about this in communities because it’s about issues that affect people,” she says. “Hunger has increased in Oregon while it’s decreased nationally. We have a big network of food banks and food assistance, but more people are hungry now. As an Oregonian, how do you feel about that? What can be done?”

Mahajan hopes her conversations will get Oregonians thinking about hunger not just as a problem of individuals, but as a symptom of failing systems that keep people in poverty.

“The current system doesn’t let people imagine things well,” she says. “What if we put all the energy we put into hunger now—all the corporate support, all the volunteer hours, all the donations, all the staff money—into an actual solution?”

To learn more about Surabhi Mahajan’s Conversation Project programs or find a conversation near you, visit oregonhumanities.org.