Why did I drag my daughter to the march? Because my mother could not. 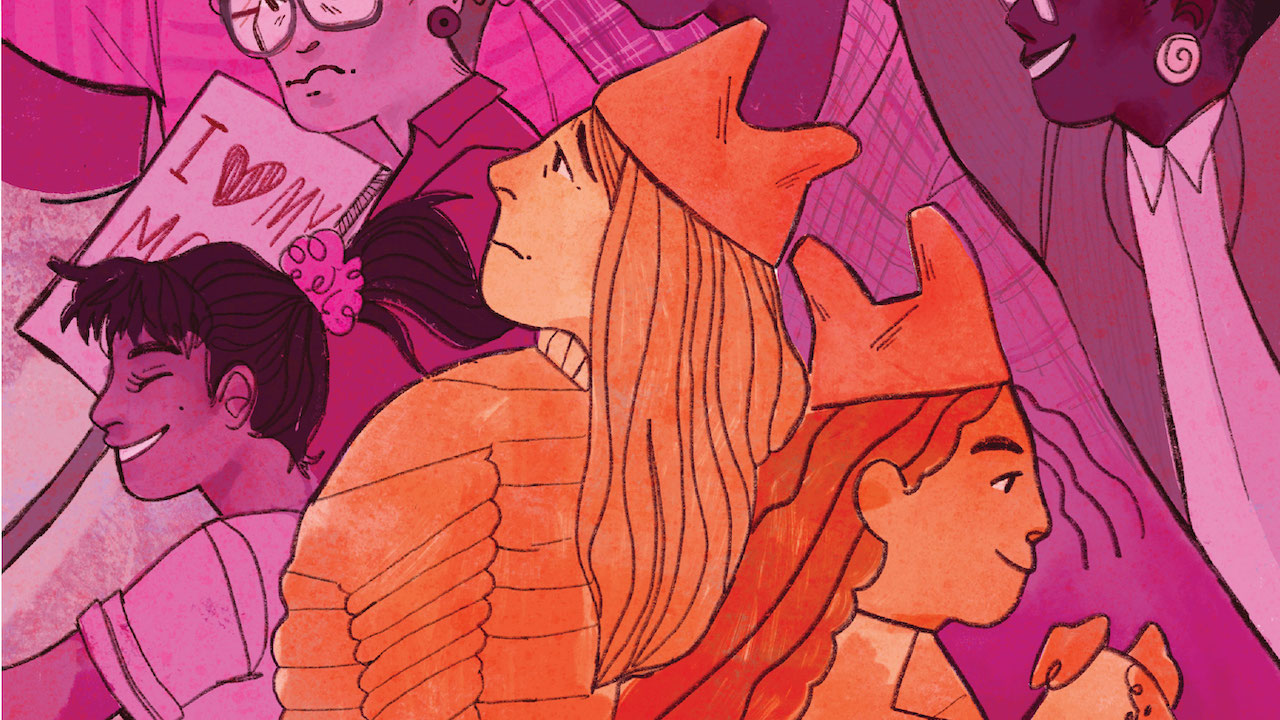 After the inaugural Women’s March in January 2017, my fourth-grader and I dragged ourselves soaked and shivering into the children’s section of the Eugene Public Library. She clutched her sodden pink stocking cap. I held our bedraggled lapdog and a limp cardboard sign that read, inscrutably, “Terriers for Peace.”

Twelve pounds, when you hold onto it for three hours, is a bitch. The air smelled of wet dog and wet wool. I longed to put down our pup and go get a cup of coffee. Instead, I sat on a cushioned bench and gazed in dismay at my daughter. Scowling, she dropped her dripping outerwear in a puddle at my boots and collapsed on the carpet with a pile of Garfield books. She spared me a single sentence: “Mommy, I am never marching again.”

I resisted the urge to shake her—gently—to remind her of her grandmothers and their fraught history, and to point out that for her sake, I’d just strolled through the streets past hundreds of onlookers wearing a pink hat festooned with faux terrier ears so she’d see that public demonstration can be fun.

I resisted the urge to thrust my phone under her nose and show her the photo I’d found from a Gay Pride parade decades before—a picture of a tattooed woman in Mork & Mindy rainbow suspenders and cropped hair striding down a street with a giant white sign that read: “Choices? March/Lose Kids. Be Invisible/Keep Kids.”

In the caption, the woman notes that she was one of the lucky lesbian parents at that time: she got to publicly protest homophobia and keep her kids.

My own mom wasn’t so lucky.

When I was nine, she left my father and moved my younger siblings and me in with her new girlfriend. But they never marched. Gay Freedom Day parades illuminated the streets of San Francisco north of us and Los Angeles to the south while I played with my Sunshine Family dolls (think Barbie in aproned gingham with a pottery wheel) and watched relentlessly heterosexual musicals on our VCR, oblivious to the joyful political demonstrations organized to help newly out parents retain custody of their kids.

My mother wasn’t one of those parents.

Instead, after we moved out with her in 1979, she became one of thousands of lesbian moms across the country in the 1970s and ’80s who lost custody of their children to enraged and humiliated ex-husbands. I wasn’t aware that so many other families shared my story until three Seattle filmmakers approached me to appear in their 2006 documentary Mom’s Apple Pie: The Heart of the Lesbian Mothers’ Custody Movement. The movie is a heartbreaking hour of interviews with mothers and now-adult kids whose relationships were fragmented by judicial systems during the years of my childhood.

Some of these women took to the streets. Some, like my mother, became invisible.

Decades after the divorce court judge decreed that my volatile alcoholic father provided a more stable homelife than the peaceful bohemian duplex presided over by my mother and her girlfriend, I discovered COLAGE (originally Children of Lesbians and Gays Everywhere), a support group founded in 1990 by kids of LGBTQ parents.

Members shared their memories of the communities of same-sex parents who marched with their children in celebration of their families. Their photos adorn history blogs. A middle-aged woman and a preteen girl with matching Dorothy Hamill wedge-cuts pose in front of a banner that reads “Lesbian Mothers’ National Defense Fund.” A mustached man in a snug blue T-shirt emblazoned with the words “Gay Fathers” walks with a child on either side of him and one on his shoulders during a 1980 Freedom Day parade.

In 1977, in the midst of these joyful protests, singer Anita Bryant founded Save Our Children, an organization focused on repealing gay-rights laws based on the notion that homosexuals recruited and molested kids. I like to think that the children and their parents drowned out her followers with a rendition of Motown singer Carl Bean’s new release “I Was Born This Way.”

I can picture them bopping to the disco beat on the streets of San Francisco, belting out the lyrics:

You laugh at me and you criticize—yeah

Ain’t no fault—it’s a fact

I was born this way.

Thousands of families paraded across the country in this way with their signs and banners. What would it have felt like to walk beside these kids, to feel my beloved mother behind me? They chanted slogans, held hands. Afterward, the adults strategized about their next political moves, their next demonstrations, while the kids played together on the sidewalks.

Decades later, I still envy them.

As a child, I sat in grammar-school classrooms and cringed as classmates threw around the words faggot and dyke, believing my siblings and I were the only ones in the world with a lesbian mom who—every other weekend—took us to great braless gatherings of child-free women in the park and dog-sat for gay male friends with extensive collections of leather-clad stuffed bears. Without a sense of community, I wandered alone and bewildered, not sure of what to fight for, or even whether I should fight.

Had my mother protested with me in the 1980s, I would have discovered the community of children with same-sex parents that eluded me until I turned thirty. I would have played on the sidewalk with other kids like me, would’ve learned to raise my voice for justice alongside them, wouldn’t have felt so desperately alone and disempowered and scared.

My mother lived with the fear that my father would somehow destroy her relationship with her children until she passed away last May. She never marched. Parents like her exist everywhere—people who want to demonstrate against discrimination, but, fearing repercussion, stay at home watching the events on TV or social media, or ignore them altogether.

I understand their terror. Just six years ago, researchers from Philadelphia’s Drexel University found that some divorce court judges in the US still take into consideration a gay or lesbian parent’s sexual orientation, and award custody to the heterosexual parent instead. In 2013, a Texas judge told a woman that she’d have to move out of her girlfriend’s house within a month or lose custody of her children because of a clause in her divorce decree that banned overnight guests who aren’t related.

In the end, we haven’t progressed all that far from the choices on that long-ago protest sign. In some parts of the country, people still demonstrate and chance losing their kids, or stay invisible hoping to keep them. We need to show up, together, to march.

This is why I made my daughter march in the rain and cold in January. While we don’t have to worry about enforced separation as my mother did, my child is adopted and mixed-race in a state with a shameful history of white supremacy. In Eugene, a city reputed to be a counterculture throwback to love and peace and tie-dye, spray-painted swastikas have shown up on sidewalks and park benches, bus shelters and the doors of a local high school. Recruitment posters for white nationalist groups appear frequently on the university campus.

I want my child to know the power of women and compassionate allies who get together to march. Even more, I want her to know their children. I want her to see herself and her experiences reflected in kids walking with her through the rainy streets.

Last year’s Women’s March fell on another gray, cold day. My daughter sat reading under a blanket on the couch near the fire my husband had built, with the terrier on her lap. The living room was warm, cozy, redolent of the pumpkin muffins I’d baked. Remembering her angry words in the library two years before, I dressed quietly and made my cardboard sign.

She looked up from her book, absorbed my pink hat and—I blush to admit it—a pole affixed with a roll of toilet paper printed with the likeness of our nation’s current president.

From her lap, the terrier gazed at me, likely pleading to abstain from a starring role in yet another public spectacle. But my daughter leaped up from the couch and ran to get her pink stocking cap. “I’m coming with you!” she said.

A lot can happen in a president’s term. Since the advent of the Trump administration, my daughter has come to me crying, terrified she’ll be deported because of her Central American birth mother. She’s worried about the well-being of her transgender friends, her Black friends.

So once again, she joined a group of my friends at the courthouse and pinned political buttons onto her hat and coat. They clinked as she walked beside me—“I March for Dreamers,” “I March for Science,” “I March for Love,” and simply, “Resist.”

“She’s really dialed in,” a New York Times photographer told me as he aimed his camera at her in front of the courthouse with her fist in the air.

Some say our children are too young to grasp the complexities of politics. In a parent meeting at my child’s school, I listened politely to a mother who insisted that we shouldn’t even talk about politics with our kids—much less take them to demonstrations—until they’re in college and old enough to think for themselves.

But justice, civility, and kindness don’t demand university-level rumination. They’re basic values, understandable to even the smallest child. I want to surround my kid with people who share those values.

As we began to walk among thousands of others in January, singing and chanting, we ran into other kids, other parents—classmates and dance friends and neighbors—we hadn’t known to be political. “Oh, you’re here!” my daughter exclaimed, throwing her arms around each one. “And you!”

Each meeting felt like a revelation—from her first-grade teacher waving from the top of the parking garage with her two young sons to the celebrity comedian who gave my kid a giant cardboard clock that read “Time’s Up!” and told her to point it upwards every time a drone buzzed over our heads.

The parade lasted three hours. We were cold. We were tired. It was worth it.

Marching with our children is inoculation against isolation during baffling times. It’s a privilege—the privilege to raise our voices in solidarity and hoist up our signs and walk through public streets without crippling terror. It’s freedom and optimism, even if we mitigate the solemnity of the occasion with whimsical signs and faux dog-ears or presidential toilet-paper-on-a-stick.

“Why did you decide to go to the Women’s March this year?” I asked my daughter when the parade died down. We sat in a café with other pink-stocking-capped women eating slices of pizza—that great democratic post-demonstration snack.

She furrowed her brow; I could practically see the word Duh in a cartoon bubble over her hat.

“I wanted to be with you,” she replied. 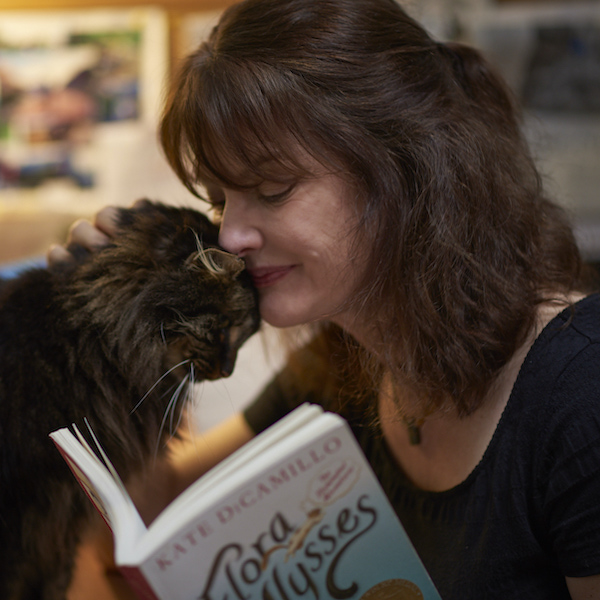 Melissa Hart is the author of Better with Books: 500 Diverse Books to Ignite Empathy and Encourage Self-Acceptance in Tweens and Teens (Sasquatch, 2019) and the award-winning middle-grade novel Avenging the Owl (Sky Pony, 2016). www.melissahart.com

Thank you, Melissa! Everytime I read your writing, I come away educated, aware, and so appreciative of the powerful good that comes from standing together against injustice.

Melissa, Your mom would be, and was, so proud of you. The fact that you share your mom so beautifully through your words - and actions-gives her a forever place in our hearts and minds. And as an added perk, you share your lovely daughter by letting us, your readers, watcher her grow. She will surely fly high and free with your teaching and love.

From the Director: Waiting for the Break

The Struggles That Unite Us