After his son wanders off from school, a father retraces the journey. 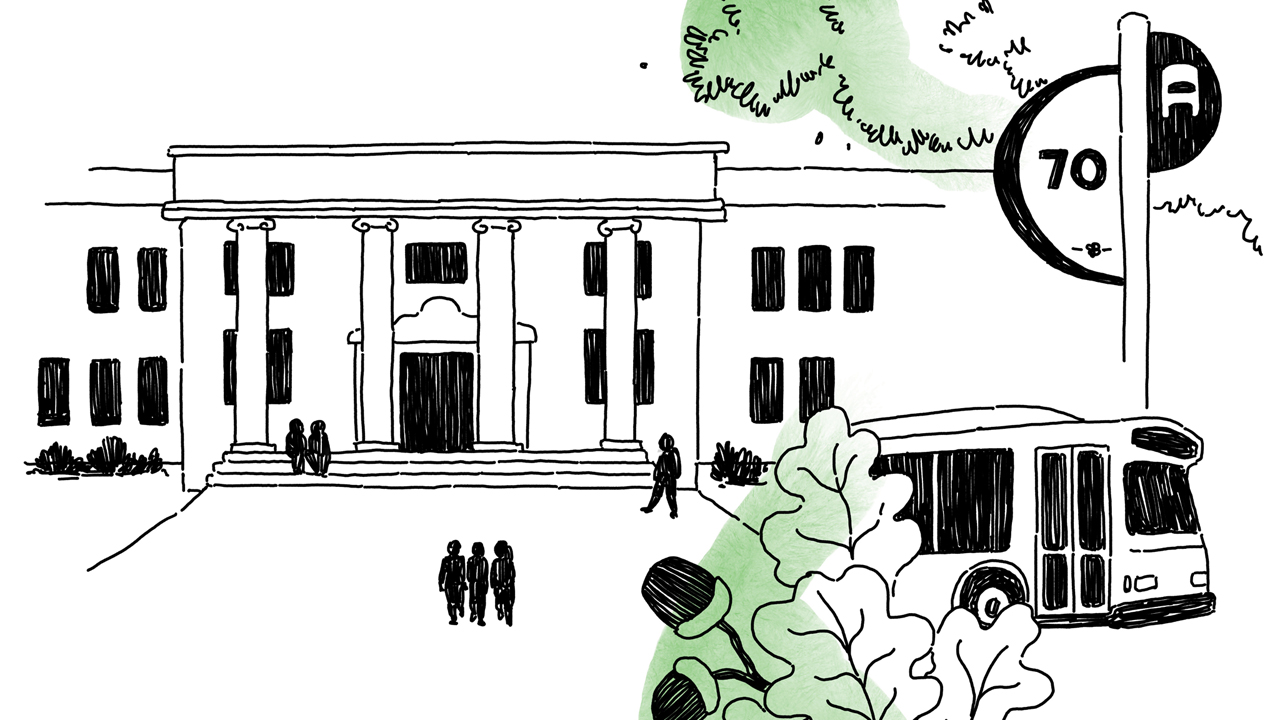 Grant High School, in Northeast Portland, is the quintessential American high school—Roman columns, red bricks, sprawling lawns—now strangely modernized by voter-approved expansions and earthquake updates. At the end of classes each day, students still flood out from between the old columns. But off toward the side of the school, in a quiet corner by the community garden, there’s another exit, a spot where the bond money didn’t quite reach: a pair of plain painted metal doors, neither old enough to be charming nor new enough to be sleek. But they do have a history—to my family, at least.

They’re the same unremarkable doors that my wife, Jennifer, walked up to one afternoon in 2013, ready to pick up our fourteen-year-old son. It’s at this exit, quieter and less chaotic than the main entrance, that special education teachers lead disabled students to waiting parents. On this particular day, a paraeducator guided out the school’s ninth-grade Life Skills class. Jennifer looked next to her, behind her, beyond her.

The para’s face went blank. Then it fell. A staff member sprinted back toward the school, yelling—the one distinct word being Morgan. Other staff scattered among the bewildered students. Someone called the police. At our home a few blocks away, my phone rang. It was Jennifer calling.

Morgan spends his days perusing guitar manuals. He watches YouTube videos of old player pianos endlessly performing Chopin’s “Cat Waltz,” Saint-Saëns’s “La Danse Macabre,” and Jelly Roll Morton ragtime songs. He is transfixed by maps, but does not remember his own address. He knows what traffic signs say, but not what they mean. He has long been able to read a clock, but we think he is only lately beginning to connect it with the idea of time. When he utters a complete sentence—always a directive, without independent clauses, without a second sentence to follow—we shower him with praise, because it is an achievement.

He carries a cell phone in his pocket, though he doesn’t know how to use it. But on that day, the tracker wouldn’t lock in: it displayed only a giant circle, miles wide, indicating that he was somewhere in the Northeast quadrant of Portland. I frantically reentered tracking requests, but nothing worked. Teachers fanned out from the high school; then our next-door neighbors joined, wheeling block to block on bikes, yelling out Morgan’s name.

What we didn’t know was that Morgan was nowhere near. He was, in fact, miles away from us already.

There is a name for what happened. Most people would call it getting lost, or wandering off, but in the literature of autism studies, the term is “elopement.” With its romantic connotations, it’s not really the right word. Jennifer and I eloped, but it did not send anyone into absolute terror for our lives.

Though elopement is familiar to parents and caregivers of children on the autism spectrum, there are relatively few studies on it, and they’re largely on elderly patients with dementia. A 2016 study in the Journal of Pediatrics found that 38 percent of children with autism and intellectual disability had eloped in the previous year alone. (By contrast, the rate among the non-autistic children after age eight was “nearly nonexistent.”) Other factors pushed the risk even higher: being male, having lower levels of social ability, and being lower-functioning in communication. These factors describe someone at the very highest risk of elopement; they also happen to describe our son.

We don’t know what he might make of all this. Morgan’s thoughts are largely his own, though his emotions are altogether visible. He is overjoyed by a banjo; he is distraught when theWi-Fi goes out. But many of his emotions and motives manifest from no apparent source. If we ask him, he echoes the wording of the last clause of our question back to us, as if we’ve hollered into a canyon.

Jennifer kept calling Morgan's phone. He didn’t know how to answer it, but she dialed again and again anyway. Eventually, she got an answer.

“Hello?” A woman’s voice. “This is Officer Nowak.”

Morgan had ridden a TriMet bus to our local prison—literally to the end of the line—and a guard was trying to figure out who he was.

Our best guess is that he followed a group of kids heading out the front doors without the aides noticing—across the three blocks of athletic fields, past fall football practice, past the runners sprinting on the track, past the tennis courts, all the way to an oak-shaded stop on the 70 bus line. And there he boarded, without a ticket, without a fare, without a concept of money, and watched as his neighborhood slipped away—as the 1920s mock Tudors turned into modest 1930s bungalows, and then into angular mid-century ranches, and then into blockish modern swaths of commercial buildings. By the time we’d called the police, he was hitting an overpass, arcing over tracks of cargo trains, and descending into a hinterland of light industrial buildings, silos and hoppers and scraped-up loading docks. Then the buildings thinned, and his bus crossed into the floodplains, where ahead lay the end of the city itself—the river.

When Jennifer arrived there, Morgan was sitting on the empty bus with the driver and Officer Nowak, laughing. Half of one of his shirtsleeves was gone, simply torn off. We never found out what happened to it—or, for that matter, exactly what happened to him.

There was no explanation from the school. There was no apology, really. We wrote an incident report, emailed the district superintendent, and resorted to keeping Morgan home, refusing to return him until we could get an answer, a safeguard. We sat across a crowded table in a tense meeting, our social worker radiating anger at the school, the school radiating anger at the district, and the district official smoothly deflecting it all in a hundred useless directions, like a glittering disco ball.

We want one-on-one supervision for Morgan during transitions between classrooms, we told them.

“Yes,” the district official told us, “he will be in the line of sight of a staffer.”

“Of one staffer,” Jennifer corrected her. “He will have one staffer specifically assigned to him.”

“Yes,” the official agreed without actually agreeing. “He will be in the line of sight of a staffer.”

“Of one staffer assigned to him.”

We told them we’d bring a lawyer to the next meeting. The district official disappeared, and Morgan was back in school the next week.

He still went missing every now and then anyway; one time he turned up on the playground of a nearby kindergarten. The next year, on his first day of tenth grade, Jennifer and I walked into school, and he joyfully frog-hopped up to us, completely alone, in a long and empty hallway. When we returned with him to his classroom, there was nobody there. They’d gone to a ceramics class. We sat waiting with him for five minutes, ten minutes, in such disbelief that we just laughed incredulously.

We knew it wasn’t just us. Four days after Morgan’s journey to the prison, an autistic boy named Avonte Oquendo walked out of his school in Queens, New York, alone. His substitute aides didn’t know his requirements; the school guard didn’t see him go out the door. When the first night and then the second night of news reports passed without him being found, I found it hard to keep my eyes from welling up. When Avonte’s remains were discovered in the East River, I went to Morgan’s room and hugged him. He batted me away, then requested my imitation of Grover from Sesame Street. News isn’t a thing for him.

One day, I walk to the Grant High stop and board the line 70 bus—the 2:57 northbound, the same one Morgan took—and I ride it to the end of the line, staring out the windows, pondering his longest venture into the world alone. At the end of the route, the street briefly turns rutted and bone-jarring, and then we stop. Up the road, only a few hundred yards away, is the Columbia River. It is not a placid body of water. A few weeks before Morgan came here, a tech worker swimming near the opposite bank disappeared below the surface; it was another week until they found the body.

But here, out in front of the Columbia River Correctional Institution, it’s improbably calm. The prison is festooned with figure eights of razor wire, like a kid drew them onto the building. Portland International Airport is nearby, and every minute or two, the air is torn by the sound of a plane taking off. Then it’s silent save for the constant wind off the river—wind in overgrown fields of reeds and in ancient apple trees toppling over with fruit. There are No Trespassing signs everywhere, though across from the prison entrance, a wild overgrowth of bushes has engulfed one of the signs altogether.

As I wait for the next bus back, I watch a middle-aged prisoner in a brown jumpsuit cross the road with a young guard. Both women are wielding long metal trash grabbers and plucking at branches—leaning in over the No Trespassing sign, they root through the trees very purposefully, and then drop something into a white carrier bag.

“I’m so glad I get to work with you today,” the woman tells the guard.

When they walk by again, I call out to them. “What’s growing over there?” I ask.

“Italian plums!” the guard says. “Here, have one.”

“Blackberries, too,” adds the other woman. “They’re good and ripe right now.”

They leave the wilds and enter back into the apparatus of the state—of record-keeping, of wards of the government, of those supervised at every moment, and yet once so near to a boy who didn’t know he’d broken terrifyingly free.

Paul Collins is the author of ten books of nonfiction, including Blood & Ivy, his most recent work. He is a Guggenheim Fellow and a professor in the creative writing program at Portland State University.