During the pandemic, Oregonians have been urged to “stay home, save lives.” But for many, staying home is not an option. 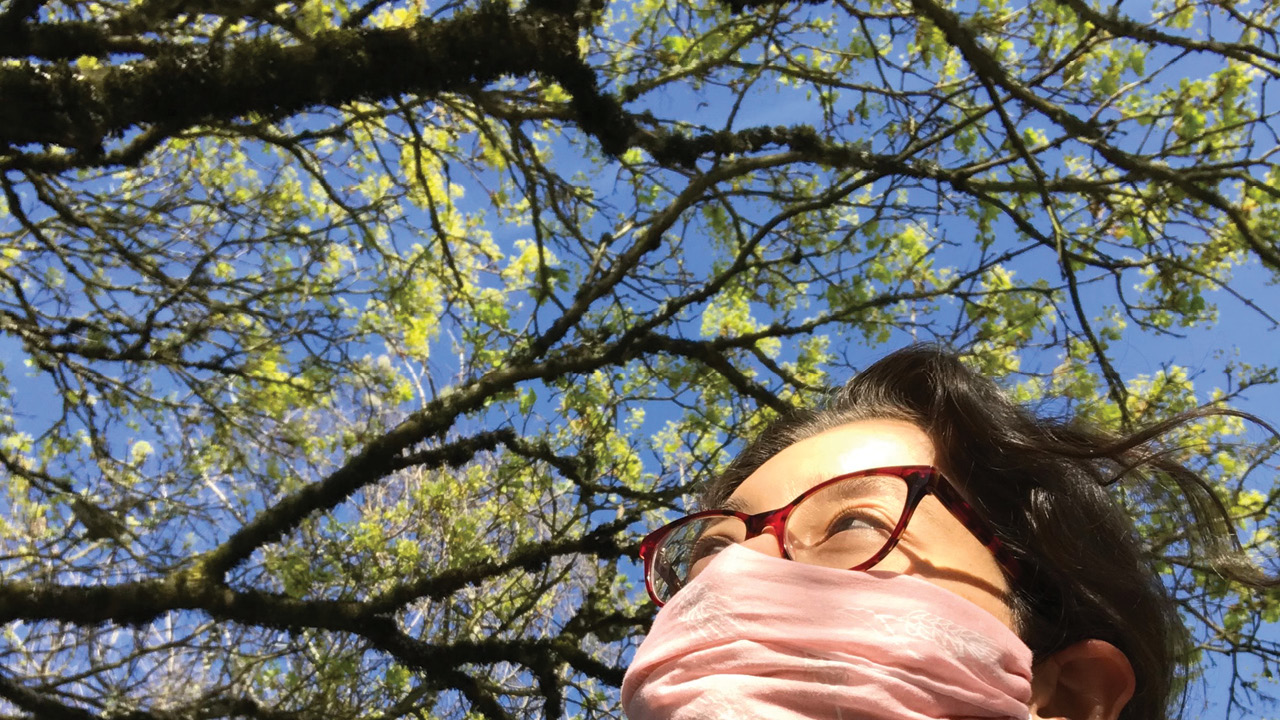 I am a Buddhist chaplain working in hospice, serving Portland area patients and families in their homes and care facilities at end-of-life. Most of my day is spent driving in my car, getting in and out of PPE. There is often grief in my work, but with the pandemic, there are so many additional layers of grief. More than ever, I feel heavy at the end of each day. Then I take a walk after work. My neighborhood is sandwiched between highways, and there’s just a few blocks with trees, but I cherish this walk. I remind myself of the open sky, lush trees, fresh air. That walk always feels like freedom. 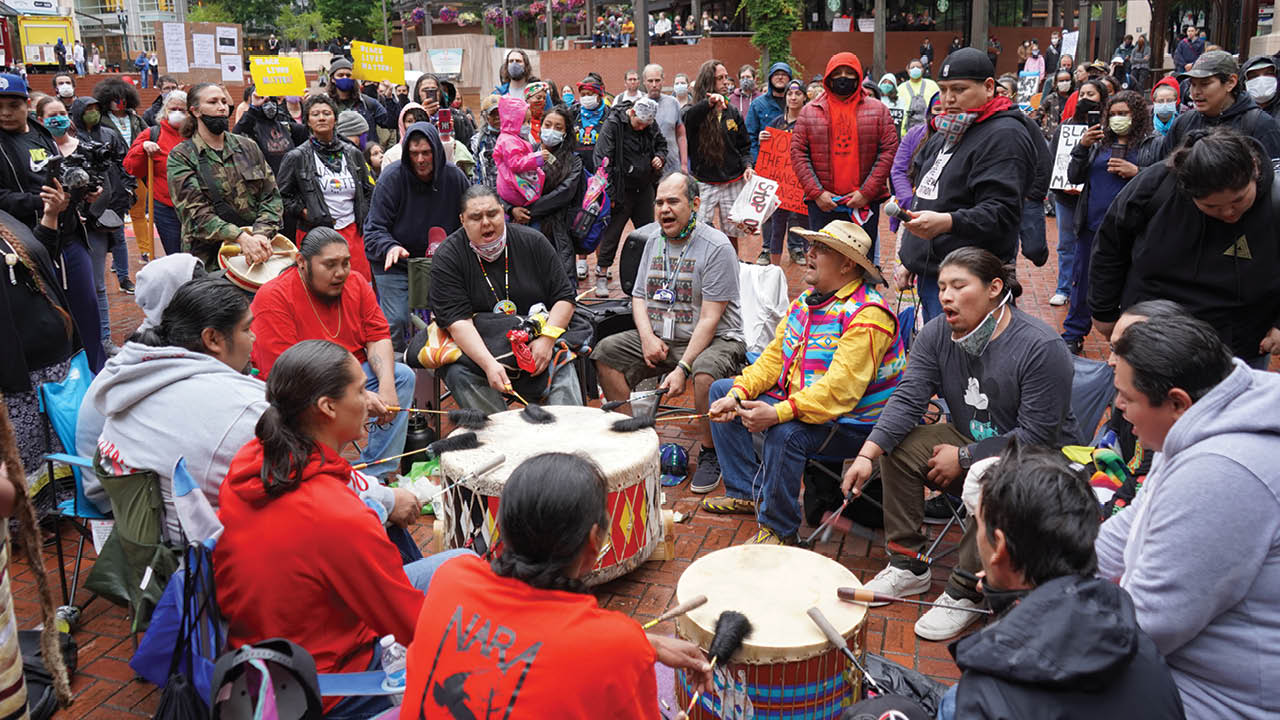 I see many parallels and much in common between the Black Lives Matter movement, and the fight for Indigenous rights, so when this gathering was announced (The PDX Indigenous Solidarity with Black Lives Matter), I wanted to document this. Natives gathered from across Oregon, and the drumming in the rain felt amazing! I have found much to celebrate and identify with during these times of uncertainty, and am very proud of my Native community and extended family. 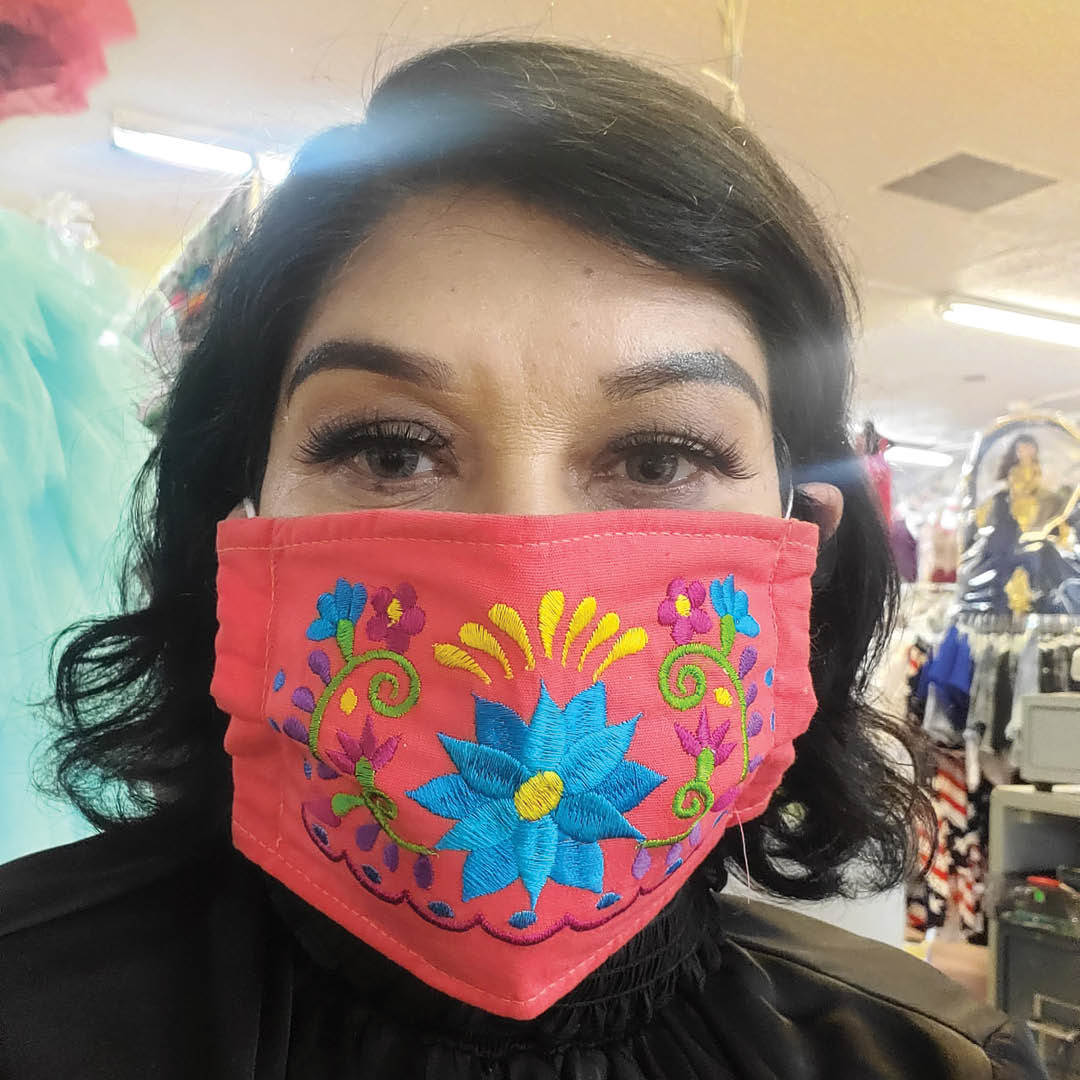 We had to go back to work. We couldn’t get the help we needed. They gave us help from Prosper Portland, about $5,000, but it was not enough. We applied for a loan with them, and they did not give it to us. The unemployment office has not responded to us either. My husband has been applying for more than two months, and nothing. As small business owners we had to go back to work. We disinfect everything with chlorine every day. We put up plastic panels. We change clothes as soon as we arrive home, and only one person goes to work per day. 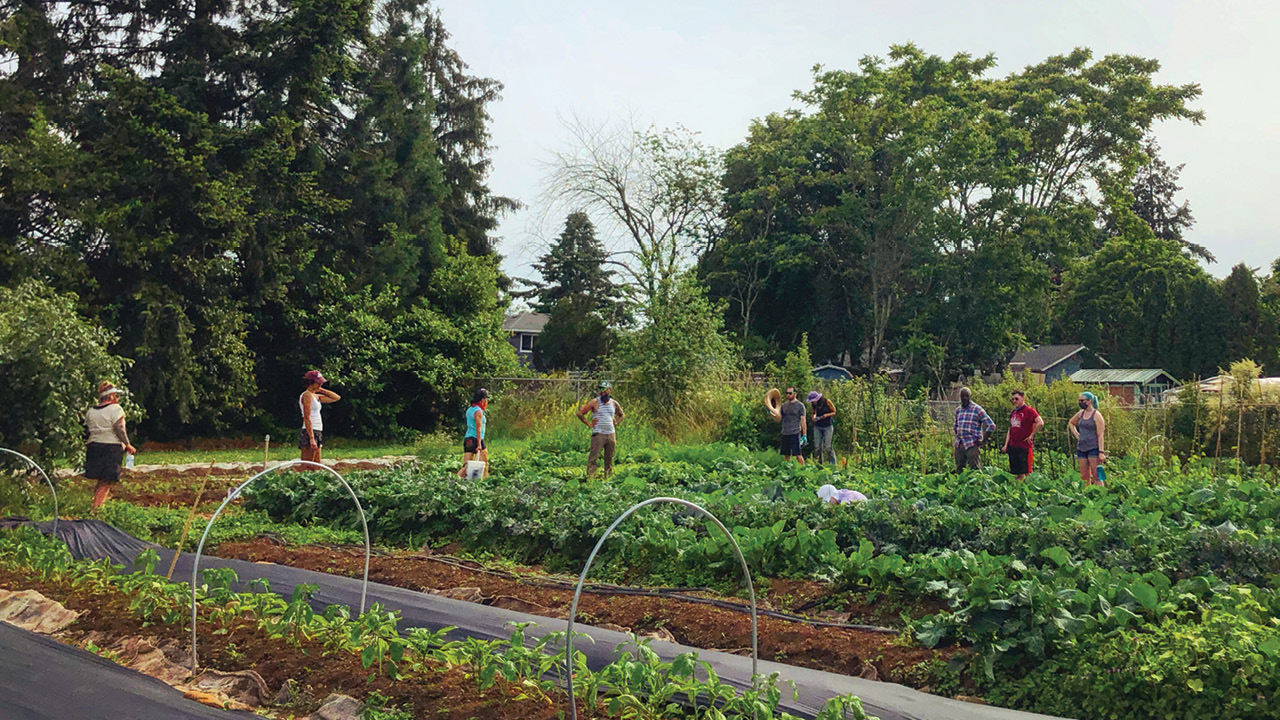 This photo was taken at Black Futures Farm. It’s a project of Black Food Sovereignty Coalition, which empowers Black folks in the Pacific Northwest to have control over their own food supply. This is the farm’s first year growing, and they’re really rising up to meet the need in the community right now. Because of COVID, CSAs (community supported agriculture) have seen a huge increase in demand. It was Juneteenth, and I organized around twenty colleagues to volunteer on the farm. We wanted to support in a very tangible way in this time of dual crises: the global pandemic and this latest uprising in the name of the Black Lives Matter movement. We had more volunteer interest than we could accommodate. Malcolm, one of the lead farmers, gave us an orientation, and in order to stay physically distant we were spread out over a large portion of the farm. We harvested cherries, thinned beets, and laid mulch down the pathways. We got to know the farmers a little better and learn what the farm is all about. This photo was taken at the end of the day, when people were gathering to wrap up and express gratitude. To learn more about Black Futures Farm and donate to support their work, visit blackfutures.farm. 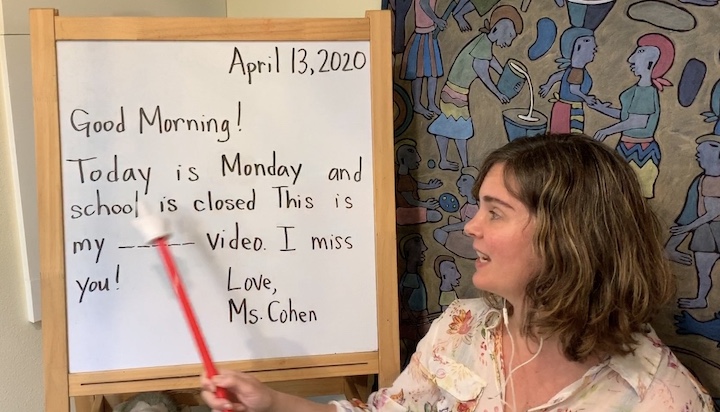 I teach kindergarten. My school closed on March 13, along with all the other public schools in our area. We moved to virtual teaching. I made videos every morning and posted them for my students. I thought it would feel nice and familiar to them if I kept up with our morning routine. It was really weird to do it with no audience and strange to record myself and then play that back and look at it. I got feedback from parents and students that it was meaningful. I could tell it felt something to them too. Young children need to be in a classroom together with their teacher, and I know that’s why we’re struggling to make it happen now, even though it’s really dangerous. Children are social, they learn through play, and they need to be together with their peers. 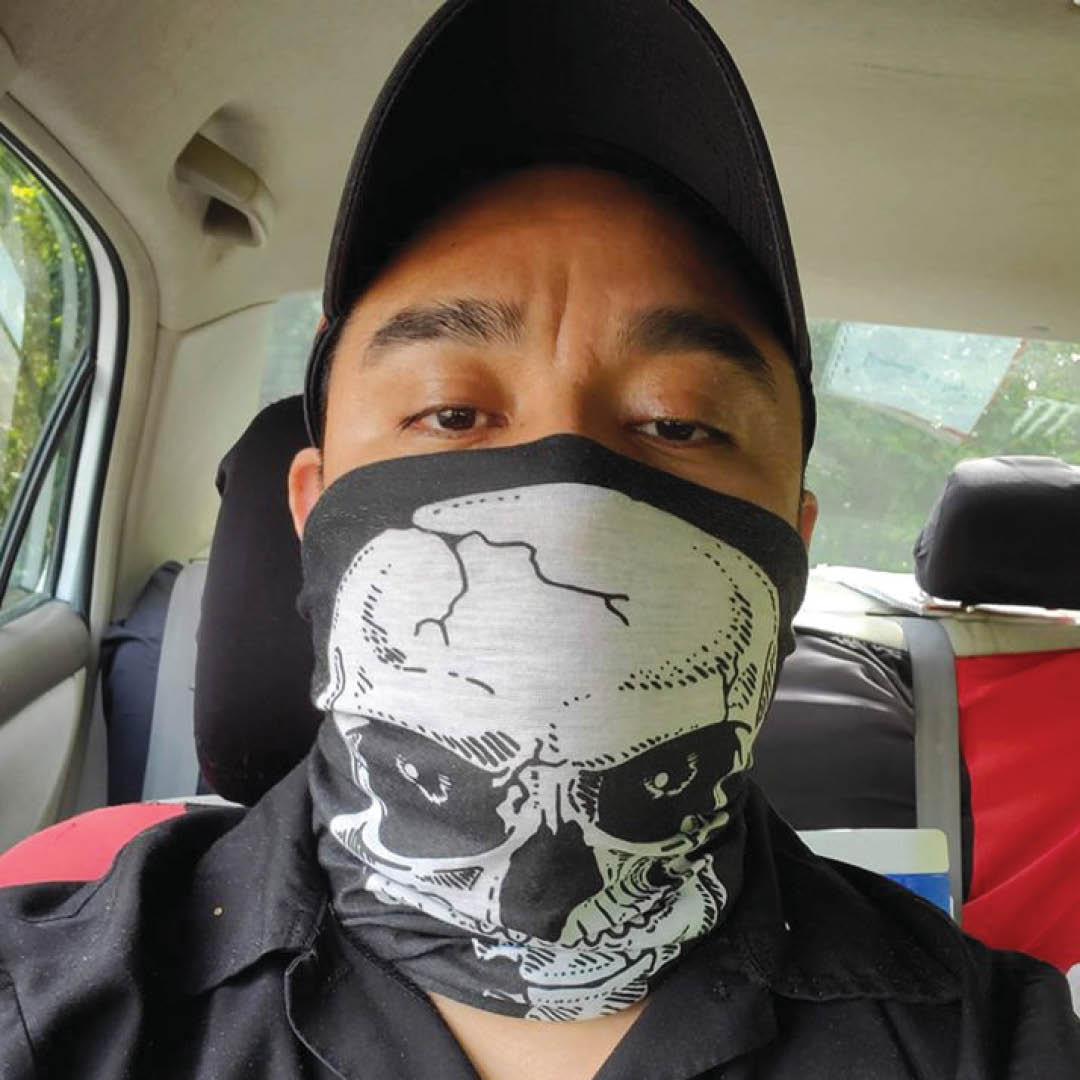 Here in this photo, I was leaving work, heading home. The situation with COVID-19 has been very sad and frustrating, sad because they laid me off of work for a month and a half. It’s frustrating that I can’t do anything to support my family. We’ve had to sell our truck in order to pay the rent. I work in a restaurant, and that was one of the sectors that was most affected, so I was out of a job for a month and a half, right here I am in my first week back to work. I follow all the health measures, we avoid going to crowded places, going out to the street only for essential needs, using my mask where required, and following the guidelines wherever we go. 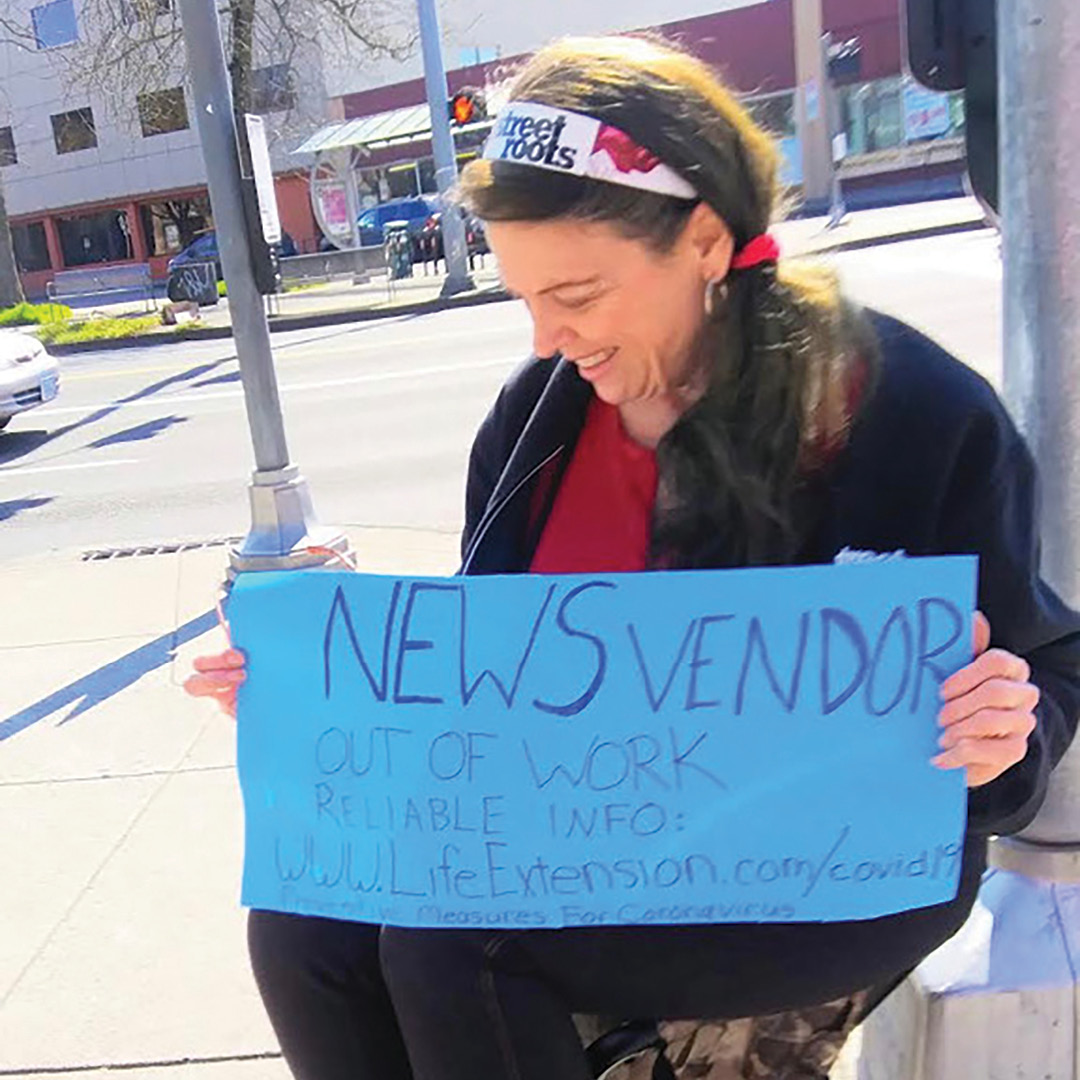 I’m a vendor with Street Roots. When the state shut down, so did we. Street Roots went digital. That was my sole income. I’m in subsidized housing, and I decided to panhandle. I’ve done this before as a homeless person, but not in the middle of a pandemic. Initially, everyone was laughing at people wearing masks, and I was wearing one because my daughter’s husband works at an emergency room in Colorado and she called me and said, “Mom, wear a mask!” So I wore a mask and everyone thought I was sick. No one would come near me. I eventually took off the mask and put out a bowl so people could put out donations apart from me. I was wearing a mask whenever I wasn’t panhandling then, and now I wear one all the time. This is in Hollywood, where I live, in front of the Whole Foods, on March 22. (Street Roots, a street newspaper in Portland, will be returning to print soon, and all vendors will receive a health orientation and learn to maintain physical distance while selling the paper.) 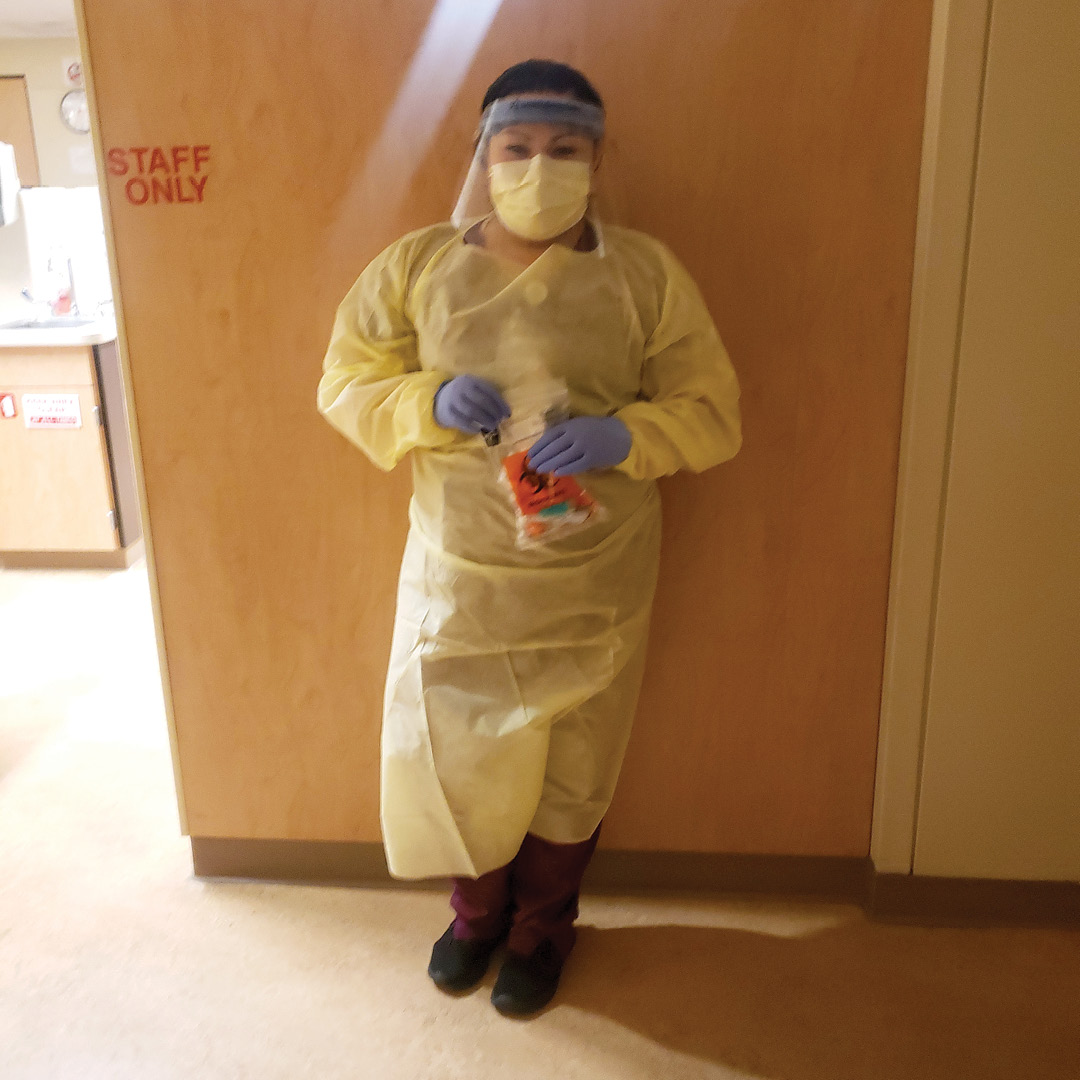 It’s been really difficult during the pandemic, especially for someone like me, a single mother. I have had to go to work in the hospital all this time, at the same time that finding a safe place where they can take care of my two-year-old daughter. It’s also been difficult because I not only have to worry about my daughter but also my parents who lost their job for a while, since one of them works in a restaurant. My job requires me to help in all areas of the hospital, no matter what department it is, helping to take blood tests and other things. So take the correct precautions and use protection, it is a very big risk that I take every day, not only for myself but for my two-year-old daughter and the rest of my family. I love my job of being a Phlebotomist, and I hope everyone takes the right steps to protect themselves and others. 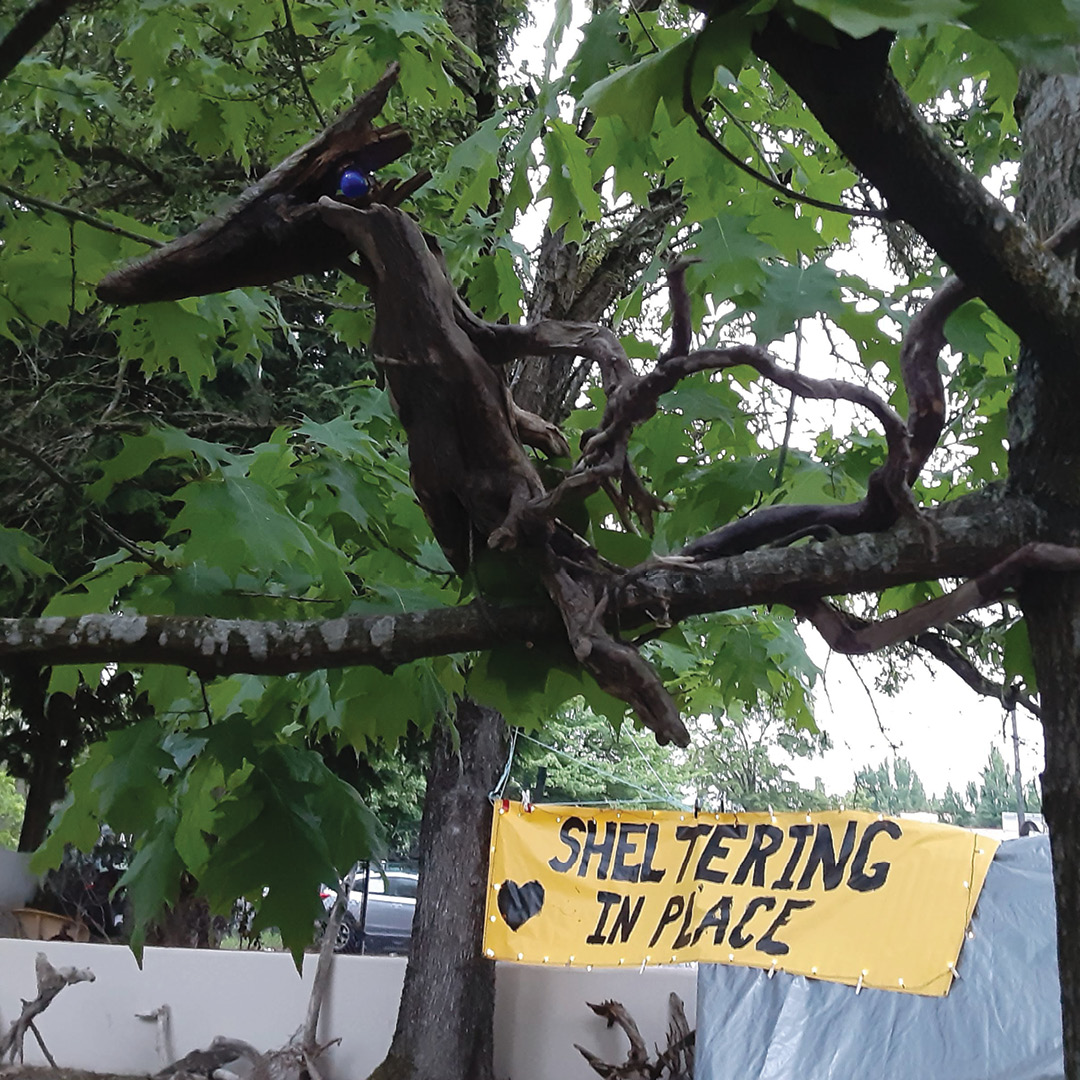 In the tree (foreground) is a bird made of wood, which is an example of the sculptures I sell from that location under the business name Outside Art Sale. In the background you can see additional sculptures, the outside structure I live in, and the sign that says, “sheltering in place.” The sign was made for me by a friend and her six-year-old son at the start of the pandemic to highlight the CDC’s advisory for municipal governments that they should suspend all forced removal of homeless camps. Prior to the pandemic, I had started getting a stipend of $200 a week for doing outreach in the homeless community supporting an end to sweeps of homeless camps. The central parts of that plan included door-to-door canvassing building toward a series of protests aimed at the Mayor, the City Council, and various businesses that participate in the sweeps of homeless camps. All of that was out of the question with the pandemic. There was, however, still a need to do outreach in the homeless community. And so we began a community education project to advise the homeless about COVID-19—how to avoid contracting it and how to avoid spreading it. Also, along with others, I began helping to get out hand sanitizers and masks to the homeless. And at my place I also maintain one of the many hand-washing stations set up by people opposed to sweeps of the homeless. 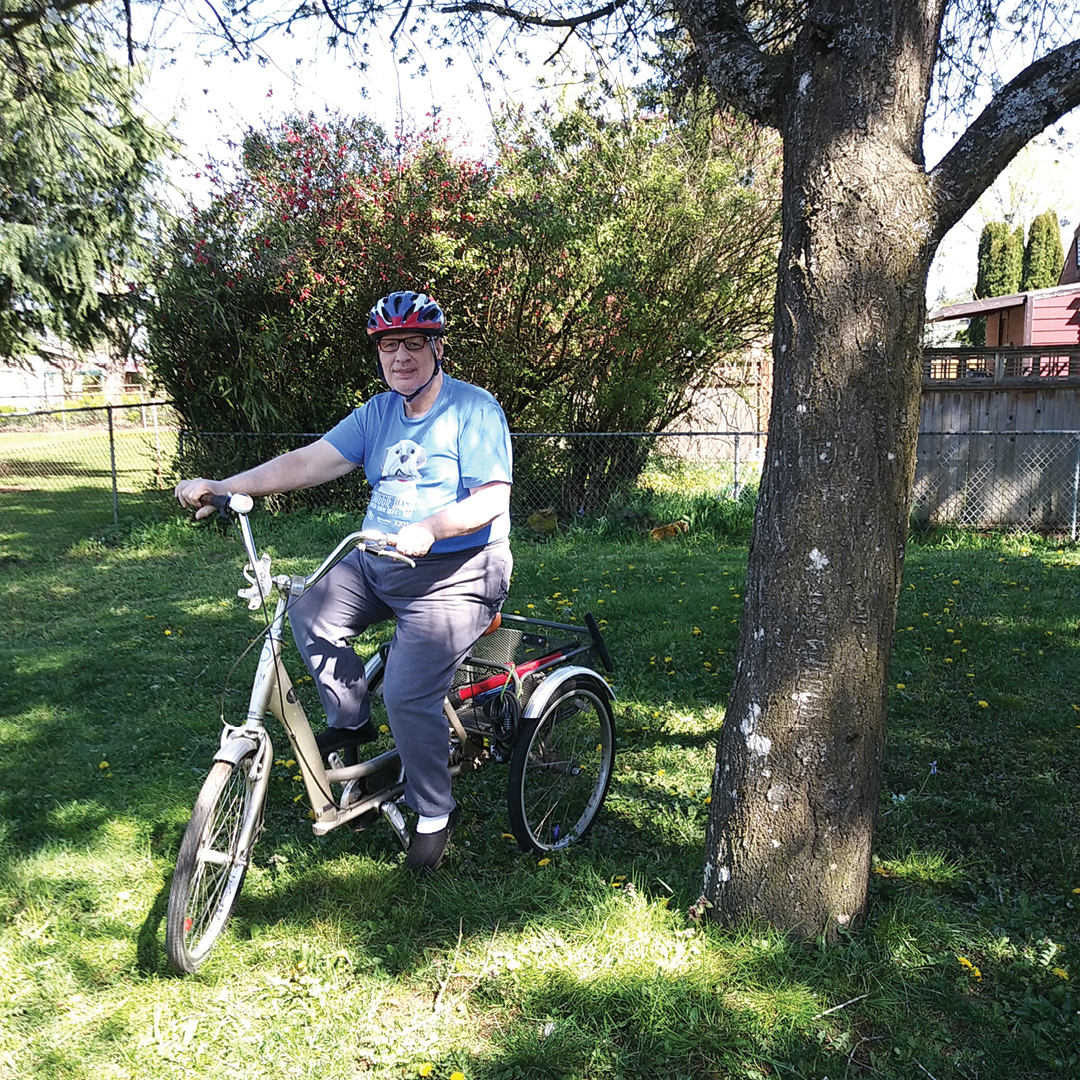 Steve McQueeney receives personalized support services from the Portland nonprofit Community Vision, Inc. On April 9, he was in his backyard in Southeast Portland, helping his staff do yard work. But before long, he walked to his shed, pulled out his three-wheel bicycle, and surprised his staff by pedaling laps around his yard. McQueeny had this to say about the pandemic: “We were told by the state not to go on street because people have virus. So I ride my bike in the yard. I don’t know when it will be different. We’re waiting a long time for this virus to go away. . . . It is very dangerous. We don’t know who died. We don’t know their names. We don’t know how they caught the virus. That’s what I worry about. We don’t know—it might go away, it might not. We can’t control that virus; nobody can.” 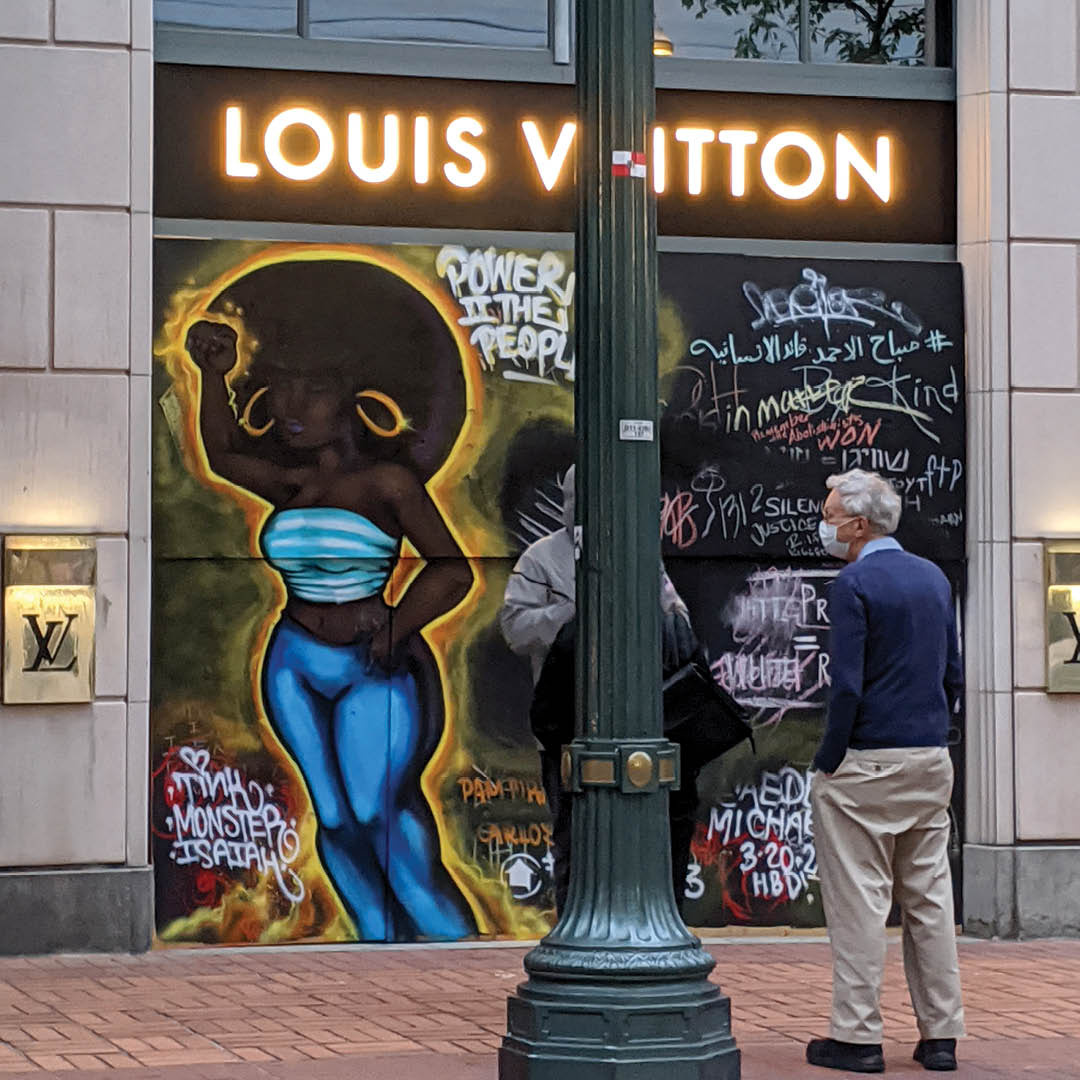 I went downtown with my family after being sheltered in for over a month, on the 15th of June. We wanted to join the Black Lives Matter protest. Several folks from my place of work were going to be speaking at the rally. We had participated in our own neighborhood rally so far, but we hadn’t gone downtown. I have two kids who are teenagers, and my husband. There were hundreds, thousands of people in Pioneer Square, listening to speech aftewr speech on Black Lives, and there were just a few of us who sauntered down toward the boarded up commercial places, Pioneer Place and the Apple Store. There were shrines on the Apple Store, but what really struck me were the other places, right on the opposite side of the street and the Max track. There was this gentleman who went from storefront to storefront absolutely wide-eyed at these images. I was struck by the juxtaposition of Louis Vuitton being overshadowed by Breonna Taylor’s image, and the person who for me is the typical Oregonian looking at this storefront. The photo displays the contrast between name-brand expensive consumer goods in the background of a boarded store-front and a DIY mural; between Black bodies and white bodies. This photo is an ode to “seeing” and “being seen” outside in Pandemic times, in Portland. To be seen during a shelter in place, is a statement in itself. 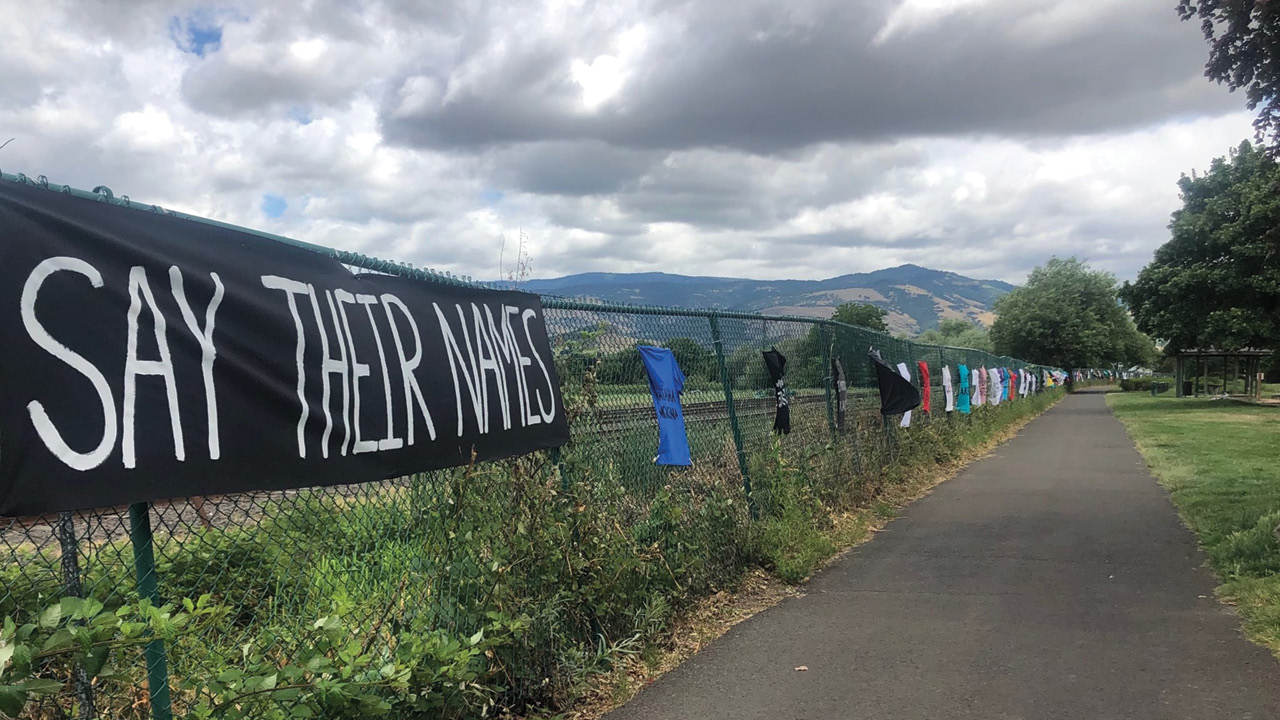 This was taken in Railroad Park in Ashland on June 28. It is a collection of 125 names of Black and brown people who have been murdered by police, painted on T-shirts and hung on two blocks of fence that runs along a bike path. I am glad that someone took the opportunity to put up this art installation. Ashland is a small town that has a lot of liberal ideas, but I don’t often see a lot of action from our community. That it hasn’t been destroyed or taken down is really encouraging. Southern Oregon is really divided when it comes to political actions and opinions. I’m glad that someone stepped up and paid tribute to the lives that have been needlessly taken. (To learn more about Ashland’s Say Their Names memorial, visit saytheirnamememorial.org.)

These are all so wonderful. Thank you! Priya, what a great picture and what apt words. The creativity evidenced downtown is inspiring. My daughter and I protested downtown one night and took a break to just walk around for an hour to appreciate all the art.

Thank you, thank you to the many writers of "In These Uncertain Times" that make this month's newsletter so inspiring to me. Thank for sharing an inclusive range of voices and occupations. Great work OH writers.