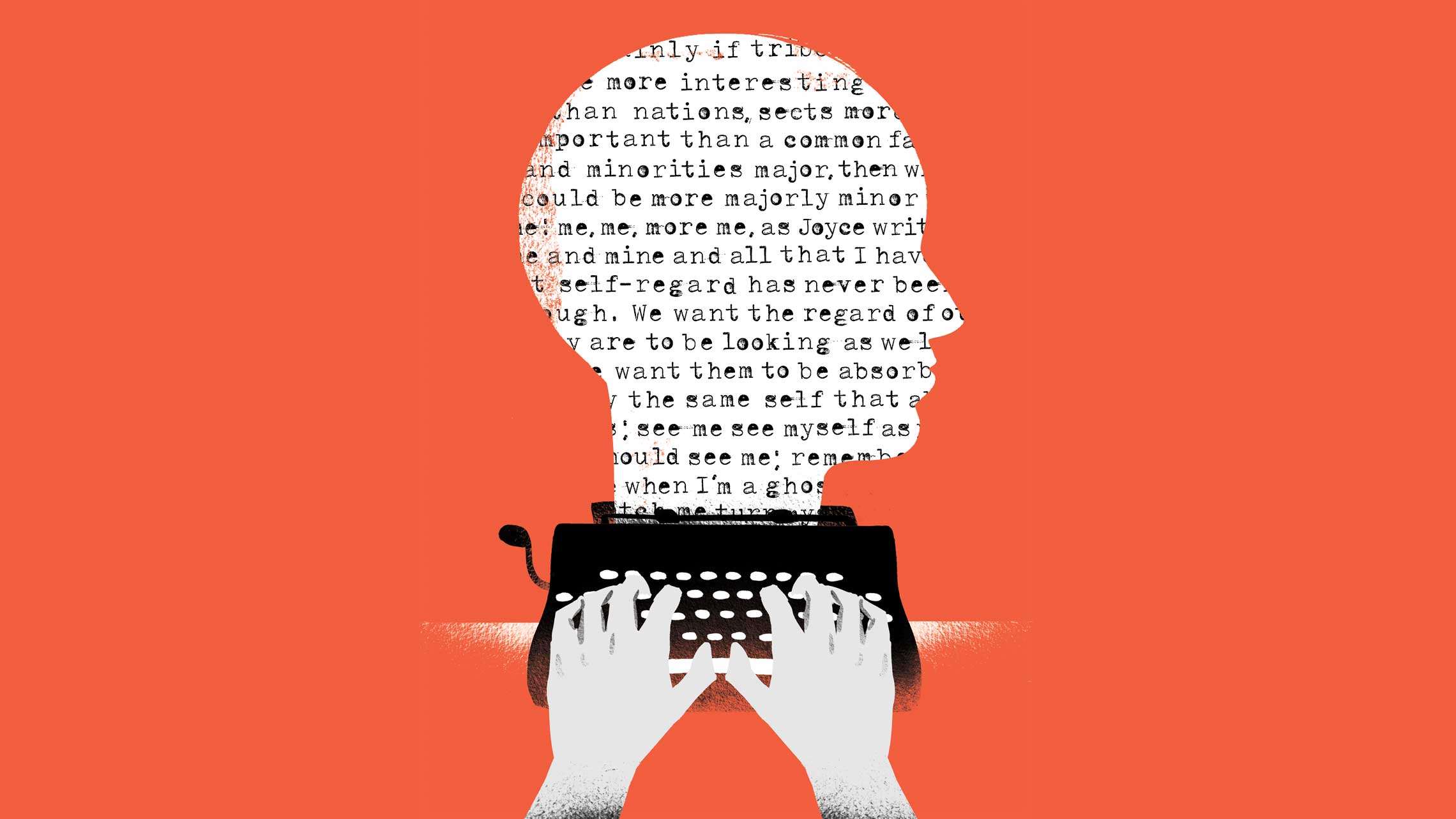 I write lyric essay and memoir, so the communication of complex, sometimes contradictory emotions from one human to another lies at the heart of my prose. I have found that many American readers are uncomfortable with writers who make earnest attempts to closely reveal, then consider the self on the page in the world. Readers call us navel-gazers, selfish, self-indulgent, and masturbatory. Our family and friends are pitied, and we are advised to stop writing and immediately seek therapy. This sends the false message that any contemplation or storytelling about the self is superfluous and narcissistic.

For me, to contemplate the self is also to contemplate other humans, to whom we are thickly connected in mysterious and concrete ways yet from whom we, at the same time, are deeply, privately separate. As William Butler Yeats wrote, “It must go further still; that soul must become its own betrayer, its own deliverer, the one activity, the mirror turn lamp.” A close look at self illuminates other. The soul betrays itself by shedding itself. Self becomes other. By retreating inside himself, the artist reaches far outside himself.

For instance, in the memoir The Year of Magical Thinking, Joan Didion's narrator remembers the moment she saw her adult daughter in the ICU, post-surgery, at UCLA hospital: “Half of her skull had been shaved for the surgery. I could see the long cut and the metal staples that held it closed. She was again breathing only through an endotracheal tube. I'm here. Everything's fine.”

The shaved skull, “the long cut,” and the “metal staples that held it closed” convey the narrator's sense of helplessness, of horror. The metal staples evoke coarseness, inhuman invasion. The third and fourth sentences reveal her maternal love, her desire to project safety. She's scared but she's aware that her role in this moment is to protect her daughter even when she can't.

This instance Didion recalls is deeply private. The narrator describes her daughter at a vulnerable moment, when the body cannot betray itself as anything other than a body in trauma. It's also vulnerable for the narrator, the mother who cannot prevent or fix her daughter's illness. The contradictions revealed in Didion's prose allow readers to experience the instance authentically through memory and imagination. As a reader, I don't question whether Didion is indulging herself or exploiting her experience or the experience of her daughter, because I'm too busy feeling the contradictions in Didion's heart. The prose transfers them from hers to mine.

In Enough About You: Adventures in Autobiography, David Shields argues that the nonfiction writer uses the self as a theme carrier. The writer expresses his or her own memories and thoughts as a way of getting to the other, to reveal the humid human condition. Shields's various, adept arguments in this book call attention to the prose of David Foster Wallace and Geoff Dyer, the films of Ross McElwee, and the text-image works of Sophie Calle—works that deeply mine the self while exploring human experience.

Here is what the very cheeky William H. Gass says in his essay “Autobiography”:

Certainly if tribes are more interesting than nations, sects more important than a common faith, and minorities major, then what could be more majorly minor than me: me, me, more me, as Joyce writes, me and mine and all that I have done. Yet self-regard has never been enough. We want the regard of others; they are to be looking as we look; we want them to be absorbed by the same self that absorbs us: see me see myself as you should see me; remember me when I'm a ghost; watch me turn myself into a book.

I enjoy Gass's compact phrasing, the exhilarating speed of his thoughts, the repetition and the music his prose creates. The full-rhyming, running imperatives, “see me see myself as you should see me” is a gleeful command for writers (and readers) of autobiography to try to see the self that the self cannot see.

With his seminal work Confessions, St. Augustine defined the confessional mode as writing that not only reveals hidden layers of self, but also releases the self into the open hands and ears of the other, and, if only momentarily, from that which burdens the heart. What burdens the heart? Love and death burden the heart. Love and death stake out—in our bodies, in our minds—secret chambers in which to dwell. Joy, reverence, devotion. Adultery, breakups, loneliness, shame. Illness, bodily impairment, death, grief. We shy away from speaking about these experiences in our ordinary lives. We feel ashamed of our vulnerability to physical and emotional weakness and to deep irresolvable uncertainty, to loss of bodily control. We go underground with our experience. We secret away what we believe to be hurtful, but what is most hurtful is our secrecy, which goes against our nature as social animals who reach for attachment, who need to feel known by others.

An act of secrecy is an act of separation. My own secrets have hurt me and others around me because they have been a way to stand apart from other human beings, and writing has become, for me, one way to stand with other human beings. And paramount to the confessional mode are the implied open hands and ears of readers and listeners, of the other. As Gass says, “We want the regard of others,” even if that other is imagined.

The writer makes use of form not to cloak but to reveal. Yet so many American memoirists miss the mark when they don't make vigorous attempts to understand what, how, why, and to whom they confess. This is narrative without essay, writing that negates the contemplative impulse, memoir in which the writer mistakenly employs the tools of the novelist and not the tools of the essayist, the memoirist, the poet: meditation, image and metaphor, sound, associative thinking.

When readers complain that a nonfiction work is self-indulgent or dismiss the work as navel-gazing, it is perhaps true that the writer didn't reveal the self as divided and complex. Perhaps the prose lacks specificity. Perhaps the emotions lack precision and nuance. Perhaps the soul fails to betray itself. The reader does not feel that a complex human experience is being portrayed on the page, but instead a simplistic, clumsy attempt. This is a valid criticism. Every writer, confessional or not, grapples with specificity and contradiction. Whether I'm reading fantasy fiction or confessional verse, I want to feel the expressed experience on the page as idiosyncratic and complex, as lived. I would suggest readers be more precise or direct about their criticism. Do not call the writer selfish or self-indulgent. Call the writing mishandled.

In cases where the prose does fully describe varied human experience and the contradictory inner life, perhaps readers are projecting onto confessional first-person work their own discomfort about sharing private experiences with others. Fiction writers often elude such complaints even though they fill their work with private experience, even though it is their own divided selves forming on the page. The sincere writer of any genre who aspires to make beautifully complex prose or verse describes the divided self not to exploit or push away but to reveal the self in the other, to connect human to human. Readers can then get in touch with their own contradictions.

My favorite definition of the memoir form comes from John D'Agata's essay “Mer-Mer: An Essay about How I Wish We Wrote Our Nonfictions”:

However, more deeply rooted in the term memoir is something much less confident. For embedded in Latin's memoria is the ancient Greek mérmeros, an offshoot of the Avestic Persian mermara, itself a branch of the Indo-European root for all that we think about but cannot grasp: mer-mer, “to vividly worry,” “to be anxious about,” “to exhaustively ponder.” In the genuinely dusky light of real human memory there is an activity far less sure of itself than the effortlessly recounted stories of today's sculpted memoirs. According to its roots, in other words, memoir is an assaying of ideas, images, and feelings. It is, in the best sense, an impulsive exploration. It is not storytelling, it is not moralizing, it is not knowing, learning, or owning. Rather, etymologically speaking, at the core of every memoir is anxiety and wonder and doubt.

Notice the emphasis on interiority: “to exhaustively ponder” or “an assaying of ideas, images, and feelings.” Assay means to examine or analyze. David Lazar argues in an essay from the same book that memory is always in constant friction with present desire, and yet what one finds in most American memoir is memory-based prose organized by storytelling—as opposed to prose organized by the mind's motion, by the body's resident desires and fears.

And what is it, dear, that you desire? And what is it that scares you? Tell me, please. If you could do anything you wanted without reprise or fear of reprise, what would you do? Do you know why? How so? Tell me, help me feel less alone in the world. Tell me who you are, Dorothea Lasky:

I cheer for writing that ends up treating the self as a singular, mysterious, varied entity into which we tap through vocal idiosyncrasy, hyper-detailing, and lucid, generous meditation. The self is what we all have in common. To reach the self one must leap into the divine, which is to say, one must simultaneously be in touch with oneself and with the mysterious other, like the fourteenth-century Eastern Orthodox monks who retreated to a closet to pray. By ceasing to perceive the outside world, they could retreat with vigor inside the self with the hopes of achieving a more experiential knowledge of God. For me, to contemplate the self is also to contemplate others.

Consider the navel: a scar on the abdomen caused by removing the umbilical cord from a newborn. The baby, later a boy and now a man, remains aware of the seam marking where he ends and the world begins, and he looks again and again at it, studies it closely, its particular shape, its contradictory qualities (a swelling housed inside a deep recess, a squishy stability, a wrinkled mound-let), until he conjures the twisted ghost tunnel that once connected him to the other.

Illustration by Shannon May

Jay Ponteri's book Wedlocked (Hawthorne Books, 2013) received an Oregon Book Award in 2014. Future Tense Books will publish his chapbook, Darkmouth Strikes Again, this spring. Ponteri teaches in the English department at Marylhurst University and is the executive director of Show:Tell, The Workshop for Teen Writers & Artists.

What's Mine Is Yours

Trapped in the Spotlight