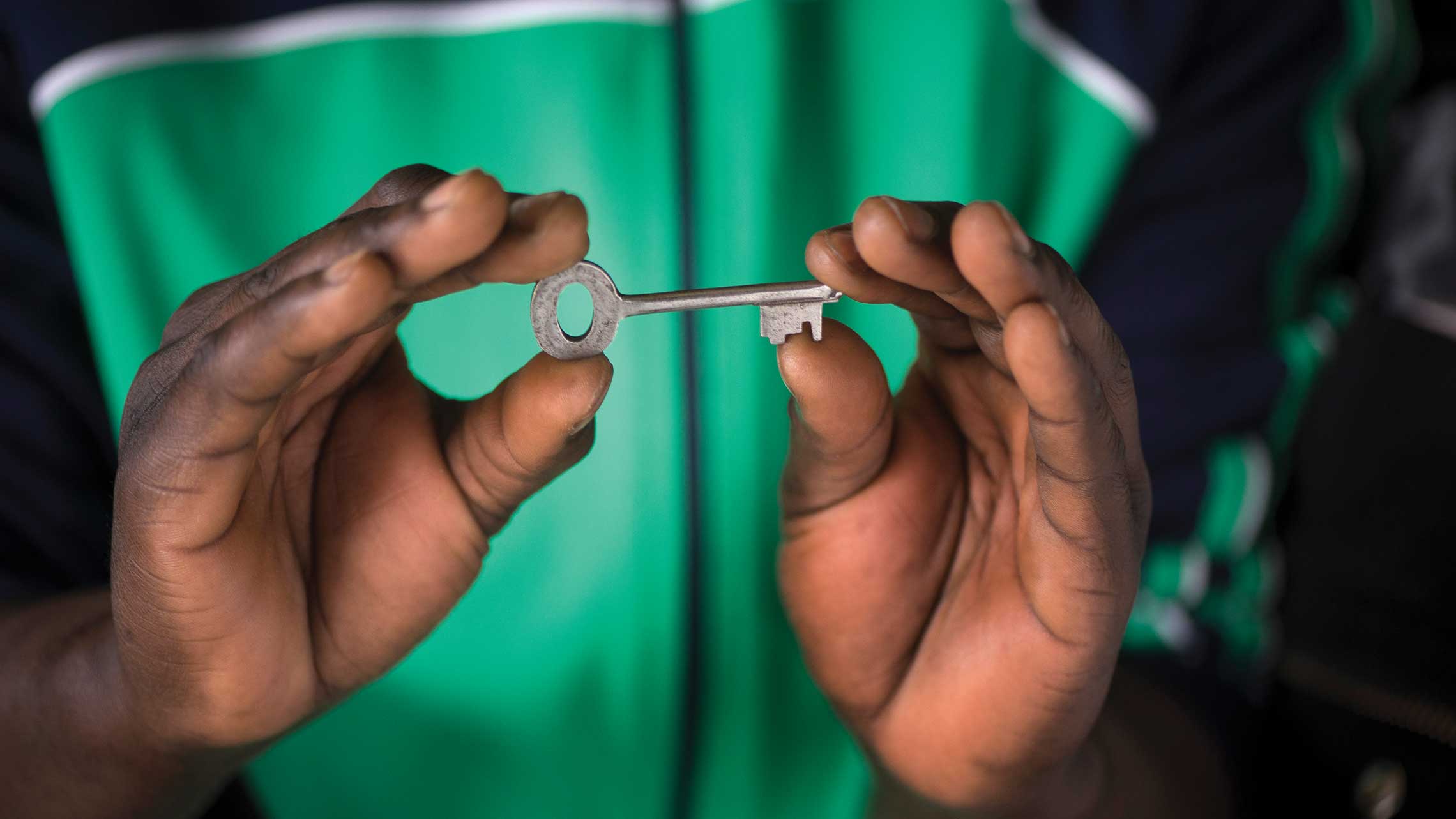 It’s an old-fashioned mortice key, dull silver. He keeps it on his keychain next to the keys to his apartment and his Toyota Camry. The mortice key opens his old house in Rwanda, a place he left behind three years ago. But even that wasn’t his real house; his real house he abandoned suddenly, fearing for his life, twenty-one years ago.

Roger fled the Democratic Republic of Congo (then Zaire) in 1996, running from militia massacres against ethnic Tutsi like himself. Once he crossed the border into Rwanda, he lived in Gihembe refugee camp, where more than fifteen thousand Congolese refugees lived on a hundred acres. Roger spent his adolescence in a home that was not his home: a claustrophobic hillside clotted with red-mud walls and tin roofs. In his home country, Roger knew to lock his doors against the militias, who went door to door looking for Tutsi. In the camp, he protected his family’s few possessions with lock and key.

In 2014, Roger walked off the plane and onto the famous sea-green carpet at Portland International Airport. In his pocket was the key to his house in Gihembe. Roger is a soft-spoken man with a brilliant, surprising smile. When he describes his reason for bringing the key, he breaks into that shy smile. “I kept it so when I get in this big house in US, I can remember how I lived,” he says. “I brought it to remind me of how I used to unlock my small house in the camp.”

Now he lives with his wife and children in an apartment in Gresham. He has a solid door that locks, couches, an oven, and a job at a laundromat. But he carries the old silver key with him anyway, a reminder of where he came from and what he left behind. 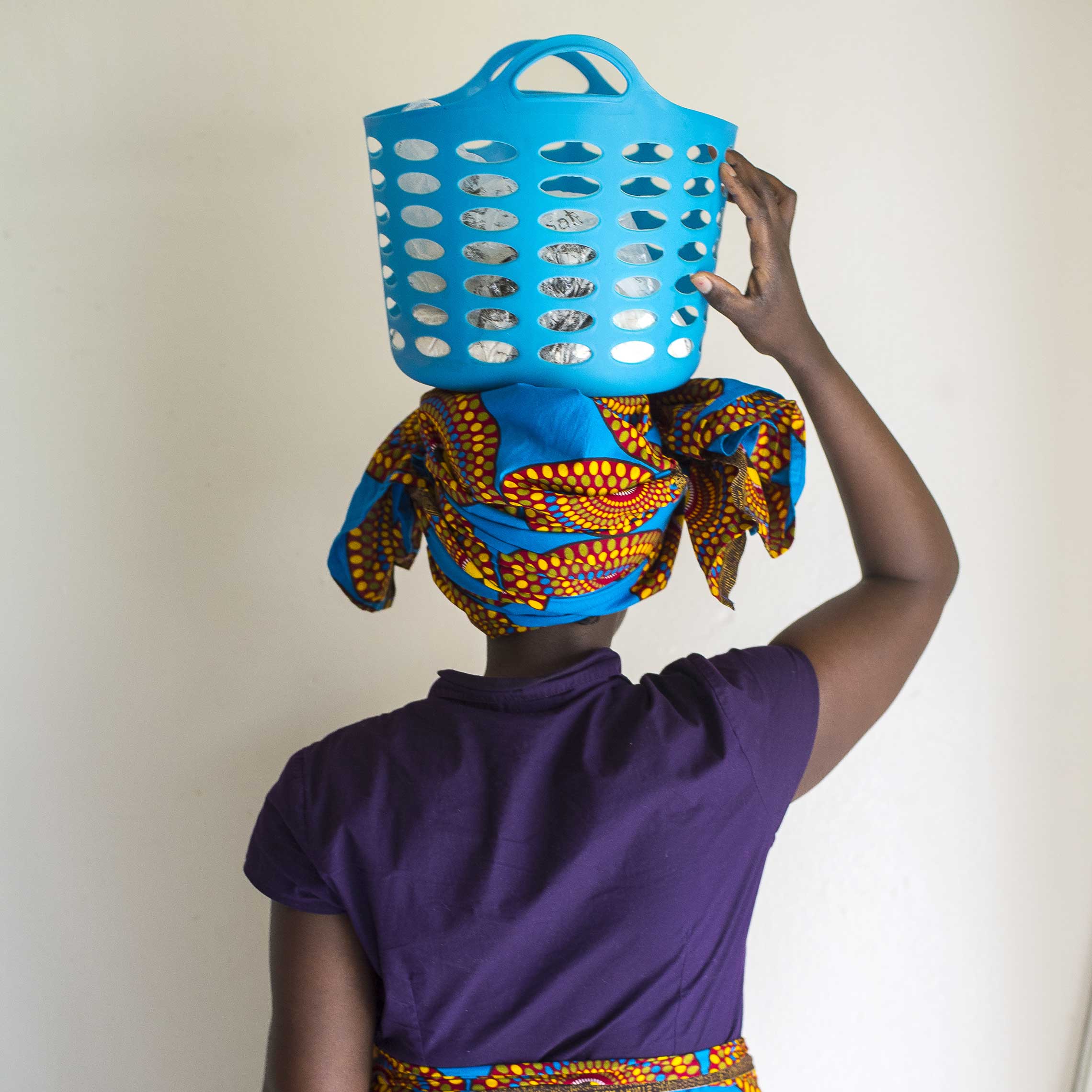 Solange Niyonsaba carried a basket, her wedding cloth, and a photograph.

Like her husband, Roger, Solange spent her teenage years as a refugee in Rwanda. She married him in 2005, at age twenty-two. That was her ninth year in the camp. For their wedding, she received a brightly colored kitenge cloth from her relatives to make the traditional wrap dress reserved for mothers. The bright oranges and blues stood out in the muddy campgrounds.

Her first child was born in Gihembe refugee camp. It was a tough place to live as a young woman, but an even tougher place to be a mother. Meals were maize and beans handed out monthly by aid organizations, with not enough protein to keep children healthy. Because of poor nutrition and sanitation, disease was common. To get water, the women filled big plastic jugs from a tap, but only at allotted times.

Solange endured it: even a decade after leaving Congo, it still wasn’t safe to go back, she says. And the militias back home had taken their cattle, the tangible wealth of a Tutsi family, so they had nothing to return to.

Solange calls her basket agatete. Balanced on the folds of kitenge cloth wrapped around her head, it carried extra food to her children. When someone was sick with malaria, it carried medicine. She wasn’t sure if America would have proper agatete; hers is bright blue, flexible plastic, strong enough to withstand a toddler’s grasp or the weight of groceries. Just in case, she brought it with her on the plane. She still uses it for shopping at the Mexican grocery store around the corner from her apartment.

When Solange came to Oregon in 2014, she left behind her entire family: her mother, two sisters, and two brothers. They are still in Gihembe, awaiting visas, and she misses them deeply. However, her Oregon family continues to grow: Solange’s youngest daughter, Blessing, was the first of the family to be born in the United States.

Listen to Solange talk about her experience. 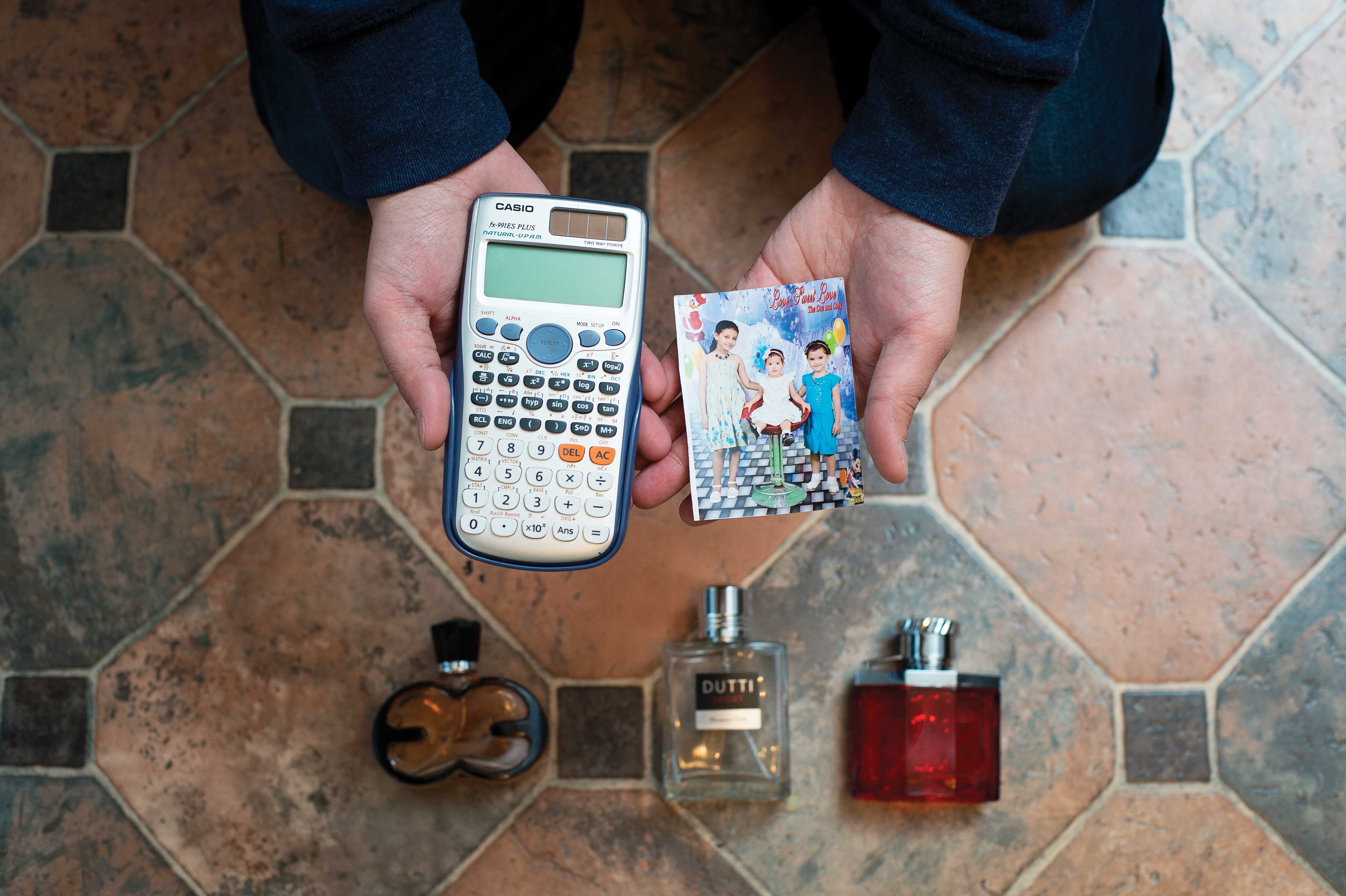 Ammar Abo Nidr carried a calculator and a photograph of his nieces.

It was the night before Eid al-Adha, the celebration of Abraham’s sacrifice to God, a time when families and neighbors get together to feast. Ammar was walking through his hometown of Baghdad to meet up with a friend. He had endured the war, graduated college, and was finally working in his dream job as a telecommunications engineer, traveling the country to set up cell towers.

A car pulled up alongside him on the street. A man rolled down the window and began asking about unfamiliar names. The back door cracked open. Ammar sensed something wrong; he pushed the door closed and ran. Bullets ricocheted off the buildings, narrowly missing him.

He hid out with relatives, and as soon as a visa was ready, fled to Jordan. He asked his mother to pack him a few things, including his scientific calculator: “The calculator was part of me. I used it almost every day in my job,” he says.

Ammar worked retail in a Jordanian cell phone shop while he endured the intensive two-to-three-year screening process necessary to come to the United States as a refugee. Then one day he received a call from his sister: his older brother had been shot four times at the door of his house.  Distraught, helpless, Ammar tried to return to his family in Iraq, but his parents threatened never to speak to him again if he did: they had already lost one son and would not risk losing another.

When he finally arrived in the United States in 2016, Ammar brought with him a photograph of his deceased brother’s three children. He has never met the youngest, who was born after he left Iraq. He talks to his nieces twice a week on Skype, feeling a responsibility to be both “an uncle and a father” from afar. And he still has his calculator, a Casio FX-991ES Plus, which he hopes to use someday as an engineer here in Oregon.

Hear Ammar talk about his experience. 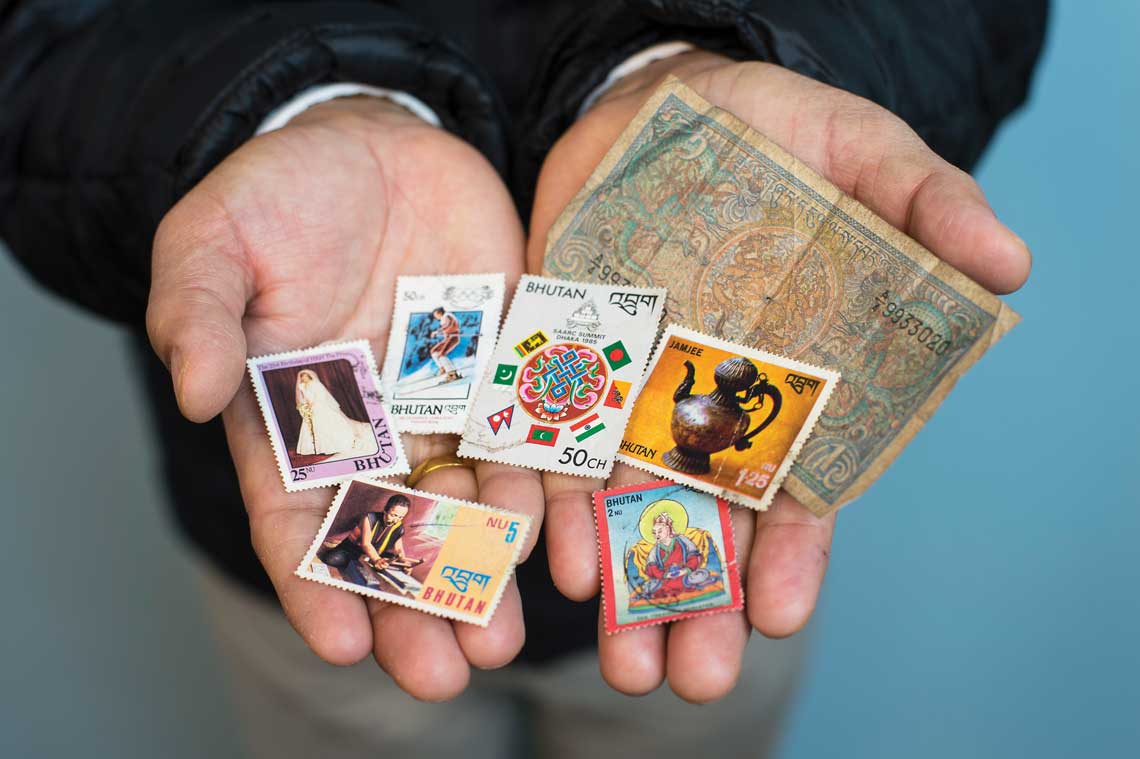 He loved stamps. He collected them in books and was always on the lookout for interesting postage. In the summer of 1991, he was working in Thimphu, the capital city of Bhutan. His brother, who worked at the post office, invited him to come take a look at some new arrivals. Chhabi had just picked up a few new stamps when a neighbor from his home village told him his parents had fled across the border. The police would be looking for him, the neighbor warned. He needed to leave now.

In the late 1980s, the Himalayan nation of Bhutan adopted policies aimed at creating a distinct national identity. The new policies targeted minority religion, language, and culture, and led to demonstrations by ethnic Nepalis and other minority groups. The government responded with arrests, torture, and the expulsion of Nepali communities.

Chhabi left immediately. Fearing arrest, he didn’t have time to go home; he had only the money in his wallet and the six new stamps in his pocket. He was settled at Beldangi camp in Nepal, among tens of thousands of other ethnic Nepali refugees. He was given a small hut made of thatch and bamboo with mud floors. He ate rice and lentils. There was no electricity, no running water. He stayed there for eighteen years.

Chhabi wanted to go back home, and he paid close attention to the negotiations between Bhutan and Nepal, which would not allow the refugees to integrate into larger society. But as the decades passed, he got married and started a family. Raising kids without milk, eggs, medicine, or job opportunities, he began to make compromises. They would not wait out the endless negotiations. They would apply to come to America.

Chhabi’s family came to Portland in 2008. The only things he still has from his home country are the six stamps and a single ngultrum, a Bhutanese dollar. He says the stamps remind him of his childhood in Bhutan: “I started there. I have my friends there. I am from Bhutan.”

Hear Chhabi talk about his experience

Caitlin Dwyer is a writer, storyteller, poet, and multimedia journalist. She studied journalism at the University of Hong Kong and creative writing at the Rainier Writing Workshop. She teaches at Portland Community College, where she is the 2021–22 writer-in-residence. When not teaching or writing, she is probably playing with her kids, wandering around in the forest, or lost in a book. 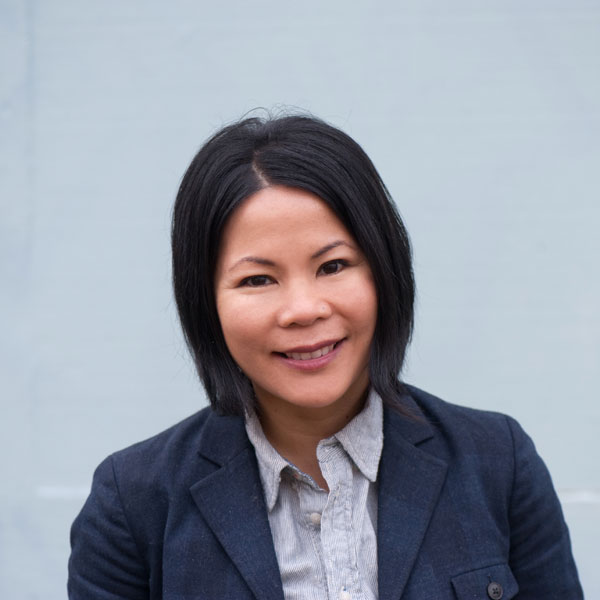 Kim Oanh Nguyen is an award-winning photographer based in Portland. She has worked for the Internews Network, USAID, and other publications.