Pancit is more than a dish. It’s history, family, and community. 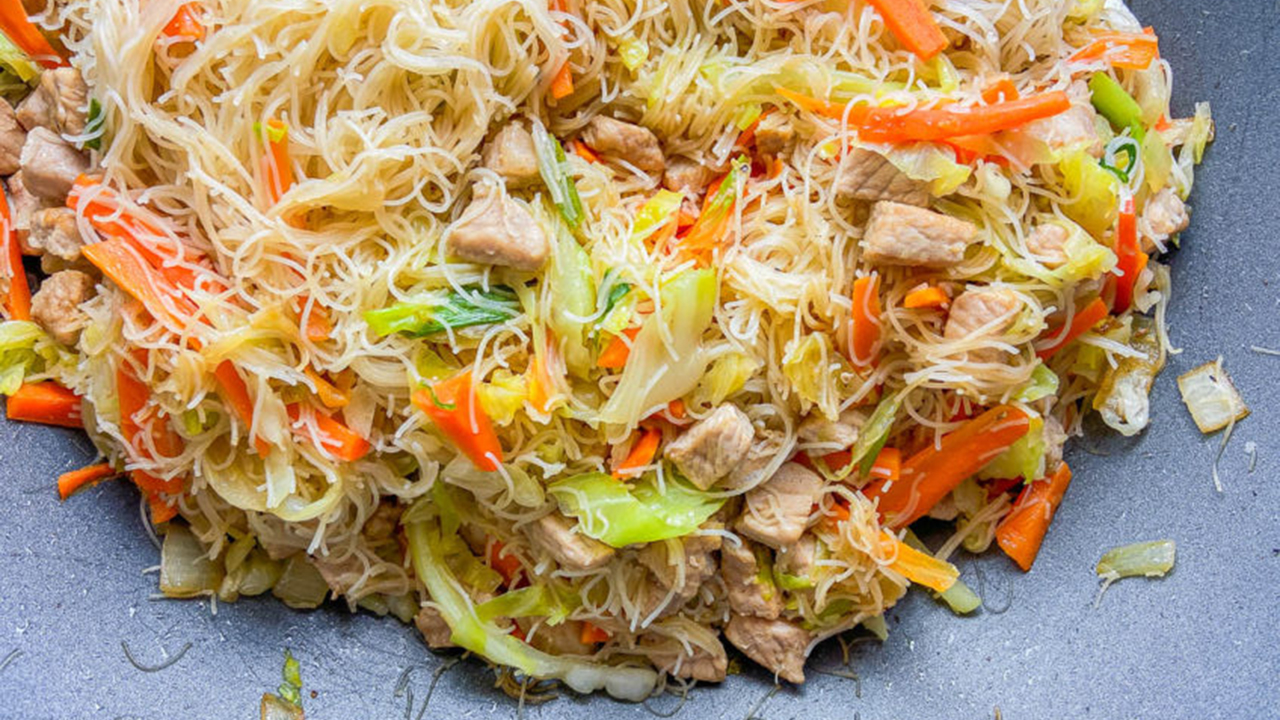 Photo by Deseree Kazda from her blog, Life's Ambrosia

It’s not a party unless there’s food, and my parents threw the best parties.

Cooking would start in the early afternoon. Meat was either roasted whole in the oven in a large pan or pulled from the fridge steeped in overnight marinade to be put on the grill. The most colorful vegetables that could be found at our local grocery were prepped for soups, sautés, sides, or salads. New rice was made with the ten-cup rice cooker; old rice was transformed on the stove with a little oil and a lot of love (that is, garlic).

I loved greeting aunties and uncles as they arrived at the house, their presence warming our otherwise quiet, ordered home, but my true joy was seeing the table fill up with food. As each member of our community of friends and chosen family joined the party, another dish or two would take space on the table. I would marvel at this abundance with each new guest’s arrival. Would there be enough room for the food? Do we have enough utensils and plates? Was there enough room for our guests at the table itself? (No.) For me, the most excitement would arise when the pancit appeared.

I have been eating pancit my entire life and have been making it myself for the past twenty years. A simple noodle dish with vegetables and meats, pancit is elegant, beautiful, celebratory, and absolutely delicious. When someone makes it for you, you know you are loved.

You can sense the delightful, aromatic vitality of pancit before even getting close to the dish. A swirl of steam infused with carefully sliced garlic and onion, soy sauce, black pepper, and sometimes the slightest hint of citrus prompts the first hunger, the nose hunger. Eye hunger is next with just a glimpse of tender rice noodles browned by layers of vegetable oil, pork or chicken fat (real or faux), and soy sauce; bright orange carrots cut into two inch matchsticks; strips of nearly translucent green cabbage; specks of yellow scrambled egg; half-moons of sliced celery; and the tiny ringlets of cut green onion. Spirit hunger is just as satisfied: ​every noodle is a medium for longevity and prosperity prayers; every bite a celebration of existence; every inhalation a remembrance of childhood and sometimes a nudge to call your folks. I have long since moved away from my parents’ home and their epic social gatherings, but when I mention pancit to someone in my community either their eyes light up because they already know it and are in love, or mine do at the opportunity to introduce a new dish to a friend.

Pancit, or pansit, is a Filipino word for noodles. The name is derived from the Hokkien phrase ​pian i sit​, meaning ​something convenient, cooked fast​, which was used to describe noodles introduced from China.​ Merchants likely brought Chinese noodles with them when they first arrived in the Philippines to work, sometime between 1300 and 1500. After running out of their personal supply, it is suggested they worked with the locals and natural resources available to them to create something similar to the wheat noodle they had originally brought. This resource was rice, which produced a different noodle altogether. Since that early introduction, Filipinos have adopted numerous versions of pancit dishes around the country—Wikipedia lists thirty-six—including pancit bihon, my favorite, made with rice noodles.

Pancit dishes have existed for much of the tumultuous, colonized history of the Philippines and its semi-feudal, semi-colonized state today. Colonization of the Philippines began as early as the 1520s, with nearly four hundred years of Spanish rule. Spanish colonization subjugated and erased much of the Philippines Indigenous culture and people. It implemented a system of ruling that prioritized specific families and an inequitable distribution of land and power that created a distinct class difference and feudal relationships between landowners and land workers. Feudal characteristics persist in the social structure of the country today.

Filipinos began resisting when the first ships arrived from Spain and continued to resist over centuries and generations. The Filipino proletariat organized, revolted, and defeated the Spanish military in 1896. Unfortunately, the US intervened to claim this defeat, and Spain gave control of the archipelago to the United States. US colonization influenced transportation (roadway improvements within and between major cities provided opportunity for increased military presence), communication (English became the primary teaching language in all schools), and economics (industrialization of the Philippines led to the passage of labor export policies and subsequent mass migration of Filipinos to work overseas). Though the majority of the Philippines are peasants and farmers, emergence of the middle class was a result of funds sent back home from overseas Filipino workers (OFWs).

While independence from the US has been commemorated since 1946, subsequent treaties have allowed for continued, indirect US control and interference in the Philippines. Filipinos continue to struggle as a semi-colonized society through numerous organizing efforts within the country and overseas.

Do I need to know any of this to simply enjoy a bowl of pancit? There’s a kind of awe in thinking of how some things persist despite chaos, loss, and heartache. Pancit is at every social event, celebration, and festival. Regardless of how a person identifies or how much money they have, everyone knows what pancit is; they all grew up with it, they each have a favorite kind, and their mom or lola makes it better than anyone else. Pancit also offers connection, a bridge, for those who migrated away under necessary and challenging circumstances as well as those who were born abroad and perhaps stayed abroad.

My Filipino grandmother passed away last summer. I continue to reflect on her resilience and that of my family and community. Lola survived World War II, eleven pregnancies, martial law, and a people’s revolution. She also passed on a love of learning to her children and the many others she taught as an elementary school teacher. She loved to laugh and thought I was funny. She cared about her children and grandchildren and always made sure they were fed. She was devoted to her Catholic faith. In my community of Black, Brown, Indigenous, people of color, queer people, and trans people, I know we have endured so much through our experiences and inheritance. We have endured all that we have learned to name and much that we don’t yet have names for. Still, we return to each other again and again, we return to joy and love.

I made pancit bihon the other day for the first time in months. As with many of my food love notes, I start with garlic. Once the garlic has infused the oil and become crisp and brown on both sides, I take all of the chunky pieces out. Next are the proteins, which don’t really need a lot of time, just a little bit of dressing. The veggies come next, sliced long for prosperity. The saute is quick so nothing is mushy. The broth is made up and noodles are added, soft from their pre-cook soak. Here I add the soy sauce, sampling to ensure the sweet and earthy flavor is just right. I mix everything carefully until the stock is absorbed evenly and completely. Top with scrambled egg, a dash of black pepper, fresh green onion, that crispy garlic, and a little citrus on the side, good to go. I miss my grandmother. I miss my community. I think of us and in that first bite, I know we are loved.

Cover photo by Deseree Kazda from her blog, Life's Ambrosia 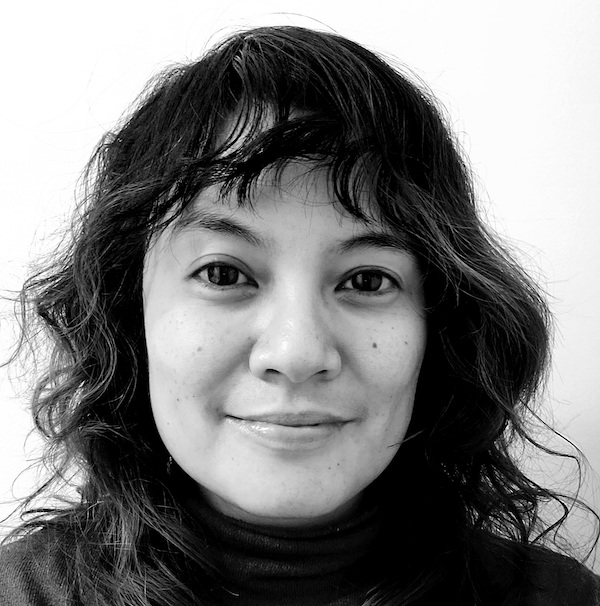 Marilou Carrera (they / siya / she) has been writing since they were six years old but has yet to call herself a writer. Their experiences as a Filipinx and Japanese person who immigrated to the US as a child, as well as her time practicing as a registered nurse and advocating with communities of color, queer communities, and trans communities for justice, have long persuaded them of the importance and imperative of sharing stories to shift culture and affect systemic change. Writing has been a balm, a love, and a practice, and Marilou looks forward to seeing how else it will be part of their journey.

Jen Shin writes about how a summer in Vietnam helped her embrace her Korean heritage.