Stories from the Diaspora: The World is Full of Lessons 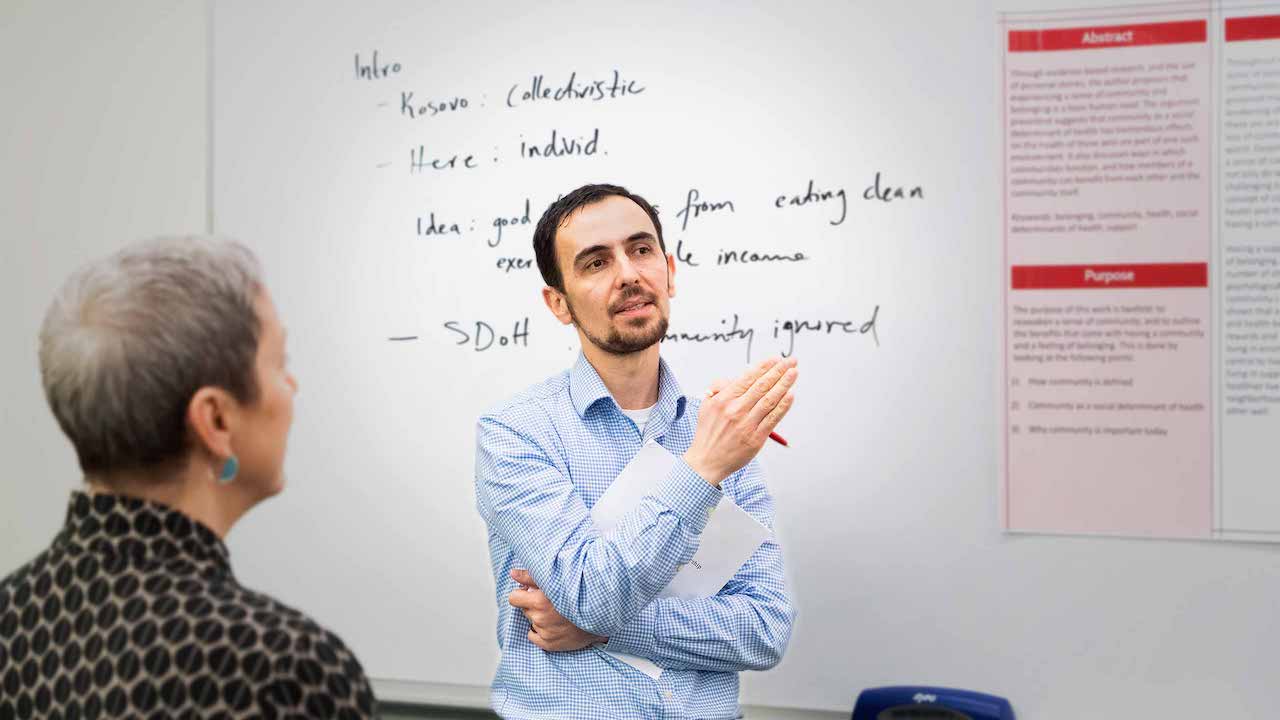 By Stories from the Diaspora

This is part of Stories from the Diaspora, a program of Portland Meet Portland (PMP) from 2018–19 that centered and raised diaspora voices through inclusive and collaborative media. These stories originally appeared on PMP's website and have been slightly altered to accomodate their new home on Oregon Humanities' platform. Explore other stories from this project in the related stories column on the right.

In a second floor corner classroom at Portland Community College’s Rock Creek campus, students are learning about the psychology of bias and discrimination. At the head of the class, instructor Flamur Vehapi explains how biases are established in the human mind around the ages of 1 or 2, before we have any choice in the matter. As students raise their hands and share their experiences with bias, the room resonates with stories of microaggressions and stereotyping by dominant culture individuals in the Portland area. Everyone agrees that these interactions never make anyone feel welcome and always keep them on guard.

The class is CG 191: Exploring Identity and Diversity, a college elective. The course introduces the impact of diversity and social justice on human development as they relate to the experiences of college students. The students explore different facets of identity development and how one's culture impacts their college experience. It includes developing cultural competency and skills beneficial for success in college and in a diverse society. For each student to become comfortable in their own identity at this phase of education is critical to help maintain focus on the rigors of student life and to guide them toward a career path that best suits who they are as individuals.

The path toward becoming one’s self through education is an indelible collection of chance discoveries, curated learning, experimentation, peer exchange, and intellectual maturation. This growth from tabula rasa to teacher has had immense replay value for Flamur. To shape and reshape knowledge and other elements of education is a process that has fascinated Flamur from a young age.

But Flamur’s quest for knowledge did not always grow uninhibited. It was in 1992 that armed police came to his school and told him and fellow classmates that the school now belonged to Serbian children only. The bigoted regime of Slobodan Milošević had made it illegal for Albanian students to go to school; one of many human rights taken away from the daily lives of Albanians in Kosova during the 1990s.

The impending war, which began in 1995 in Kosova, was a result of increasing nationalism throughout the country, bolstered by leadership that viewed Albanians as less human than the Serbian minority who was in power at the time. In Flamur's own words, "Nationalism is the identification and loyalty to one's own nation and support for its cause, especially to the exclusion and even detriment of the interests of other national entities. Often, much like the concept of racism, it is an ideology obsessed with the promotion of a distinct national image and consciousnesses exalting one specific group of people above all others."

For more information on the history of Kosova, including photos and video from the lead-up and aftermath of the war, take a look at our interactive Timeline of Kosova and the Region.

From Flamur's perspective, this history is his early life experience. The Albanian expulsion from schools was just one of many laws that were passed to guide what ultimately became a system of ethnic cleansing against Albanians in Kosova. Even though this was happening, the Serbian children continued their own education in their own official schools, while Albanians educated their children illegally in secret, moving from place to place everyday. If they were caught, students would be harrassed and sent home, or worse, become in trouble with the police. For around the next seven years, Flamur's secret education was considered a crime by the government. One week, his parents would host students in their house, the next week, it would be a different setting. That way, the police could not track where they were meeting for school sessions.

The conditions at these meeting places were not good for holding school. They were often just empty spaces, sometimes with no electricity or roof or even books from which to learn. As hard as that was, Flamur was grateful that he could go to school. It was his dream to finish his education and do something with his life for himself and his family.

Flamur grew up in the tiny village of Suhadoll, where his family has lived for over 300 years.

In 1998, the war finally reached Suhadoll and the Vehapi family was forced to leave their home. When the soldiers arrived, they demanded that Flamur's family give them everything, including the gas from their cars. But Flamur's father Skender saved some of the gas, and as soon as the soldiers left, he told his wife and children, "Jump in the car and we're all going to leave this place."

From there, the family traveled in the direction of another nearby village where their cousins lived. But on the way, there was a Serbian checkpoint where soldiers were waiting for passersby to intimidate or even shoot them. The family was terrified. Upon their approach, one soldier took out his gun, walked into the middle of the road, and pointed the gun at them, ready to shoot at any moment.

Flamur's father Skender looked at his family and said, "We're not going to stop, we're just going to drive through here. No matter what happens, we're not going to stay. They're going to kill us anyway." He put his foot back on the gas and inched the car forward toward the soldier in the road. Suddenly, a voice calls out, "Hey, Skender! Skender!" It was another soldier calling out to Flamur's father. It turned out that they knew each other from previous interactions. The soldier with his gun drawn lowered the weapon and walked off back toward the side of the road. The family was allowed to pass through the checkpoint and continue on to their cousins' village.

They arrived to find a war zone. The once familiar city was now mostly burned down and being pillaged. During a short stay, Flamur received one last chance to look back in the direction of Suhadoll.

The family then continued on to the Stankovic refugee camp in Macedonia. Conditions in the camp were rough, but it was still a respite compared to living in a war zone. From Macedonia, they were offered the chance to move to Comiso, Sicily.

Sicily was a new chapter for the family. It was their first experience with air travel. It was also an immense relief to be truly safe again after so much anguish. The military in Sicily prepared excellent living arrangements for all of the families arriving. The Vehapis felt protected and welcomed here. The Kosovar refugees were allowed to open up a school, engage with communities there, and make friends with Italian students and military personnel. Even though there were still no journals, books, or desks, Flamur remembers fondly sitting on the floor and learning again for the first time since conditions in Kosova had become too dangerous.

It was only a month into this new living situation that the family found out they would not be granted more permanent residency in Italy. Because of this, they continued on to the city of Aarau in Aargau Canton, Switzerland. The refugee camp there was much smaller than Comiso, and it was not solely Albanian Kosovars, but a mix of many immigrants who were seeking asylum in Switzerland for all different reasons.

The stay in Switzerland lasted for three months before the Swiss government announced that they would sponsor the Vehapis and other Kosovars to return home if they wanted. The family discussed this option and even though there was nothing left of home due to arson, they weighed this against the prospect that there would still be family, community, and the land they owned back in Kosova. Switzerland was beautiful, but at the end of the day, there is nothing like home.

Though the war had finished by the time they went back to Suhadoll, there was very little to build upon and restart their lives. Only the walls of the house and half a roof remained. Everything else inside had been burned or stolen. With much talk of land mines in the community, the Vehapi family was lucky to not find any upon their search of the premises.

Flamur's grandparents were also back in Suhadoll. They had opted not to continue on to Sicily due to health concerns, and returned sooner than the other Vehapis after their stay in Macedonia. Another member of the family who still remained was Flamur's dog. He was the only pet in the village who survived the war, although he remained traumatized for his remaining years. Flamur remembers at this time joining together with all the family members who returned that same week and just being happy to be there, even though nothing was left. As dark as it seemed because of the fire, loss, and destruction, the hope was that they were together and could start to rebuild their community.

Around 10,000 ethnic Albanians were killed during the war and yet the Serbian neighbors all remained in their old residences. It was the main task of NATO troops at this point to help protect both sides from any tensions between neighbors.

Before the war, the community had been friendly to one another, regardless of ethnic identity. They bought and sold from each other and lived peaceably side by side. It was nationalism that destroyed all of that. Over time, some of those relationships were repaired despite the years of hate, violence, and killings. But even today, tensions remain in some regions. It is not always easy to forgive after you have lost family members at the hands of people in your own community. Having lived through all this, Flamur still believes that dreams can come true and it is his dream to spread good will throughout the world via teaching community belonging, and writing about peace and spirituality.

“Kindness is a mark of faith, and whoever has not kindness has not faith.”

For more on Flamur's teaching and writings, visit his website: flamurvehapi.com.

Stories from the Diaspora was a program of Portland Meet Portland that centered and raised diaspora voices through inclusive and collaborative media.

Stories from the Diaspora: “Art is My Freedom”

Artist Akram Sarraj tells the story of his journey from Mosul to Portland as part of Stories from the Diaspora a project now being hosted on our website.

Stories from the Diaspora: A Sense of Home

Listen to Qudsia Ashan's journey from Afghanistan to the Columbia River Gorge and her experience with the Eagle Creek Fire, part of Stories from the Diaspora a project now being hosted on our website.