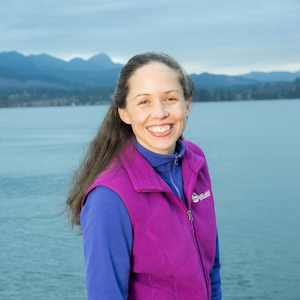 Please note: This workshop consists of two two-hour sessions, conducted via Zoom, on June 28 and 30. By registering, participants are expected to attend both sessions.

Join Katie Voelke, executive director of North Coast Land Conservancy, as she discusses NCLC’s work to protect Oregon's coastal lands. In this workshop, Katie will walk participants through the organization’s own path of relearning the racist history of land conservation in the US and the ways that conservation, through the land trust’s tools of ownership, has perpetuated Indigenous land loss. She will also share how this reckoning has led to a transformative understanding of their work and role as conservationists. Day one's conversation will begin with a presentation on the wonders of coastal land conservation and will move into a discussion about private land ownership, its origins, and its power dynamic. A reflection exercise about land possession will be assigned at the end of day one and worked through on day two prior to our concluding group discussions.

Since its foundation in 1986, North Coast Land Conservancy (NCLC) has conserved thousands of acres of land in Clatsop, Tillamook, and Lincoln counties, mainly by acquiring land outright or by acquiring conservation easements on private land, and has helped transfer hundreds of acres of land to public ownership. Its mission is “helping to conserve Oregon’s coastal lands, forever.”

By the organization’s thirtieth anniversary, in 2016, NCLC had begun approaching conservation much more strategically, guided by their own science-based conservation initiatives and focusing on long-landscape conservation that makes the biggest impact on native habitats.

Questions of possession arise regularly in NCLC’s work. Since the organization doesn’t conserve land to benefit itself, who is it conserving for? For the land itself? For plants and wildlife? For surrounding communities? NCLC envisions a fully functioning coastal landscape where healthy communities of people, plants and wildlife all thrive.

In May 2020, NCLC transferred ownership of historical tribal lands at Neawanna Point Habitat Reserve—18.6 acres of saltmarsh and Sitka spruce forest on the Necanicum Estuary at the north end of Seaside—to the Clatsop-Nehalem Confederated Tribes. The village once located on the property—known to the Clatsop people as Ne-ah-coxie, or “place of little pines”—had, for millennia, been home to many Clatsop and Nehalem people, until arriving White settlers began staking claim to tribal lands in the nineteenth century. This experience has transformed the way the organization thinks about their possession of land and is influencing NCLC’s thinking about how to move forward with its conservation mission.

Katie Voelke was raised in a home under oak trees where she spent many hours collecting bugs, making mud pies with her sister, and camping and hiking with her parents in the summers. She is sure that this lifelong exposure to the natural world is what led her on a path to study biology in school. Katie settled on Oregon’s north coast with her husband, Scott, in 2003 and spent time doing field work with the Forest Service, Bureau of Land Management, and Oregon Department of Fish and Wildlife before she finally found her calling: working in land conservation with NCLC. In 2005 Katie started as NCLC’s first stewardship director, working under founding Executive Director Neal Maine. After three years of learning the ropes alongside Neal, she took the helm in 2008 as executive director. Although her job at NCLC keeps her inside more than she would like, she manages to get her fix of the outdoors following in her parent’s footsteps: bug collecting with her three sons and spending the summers hiking and camping with family.