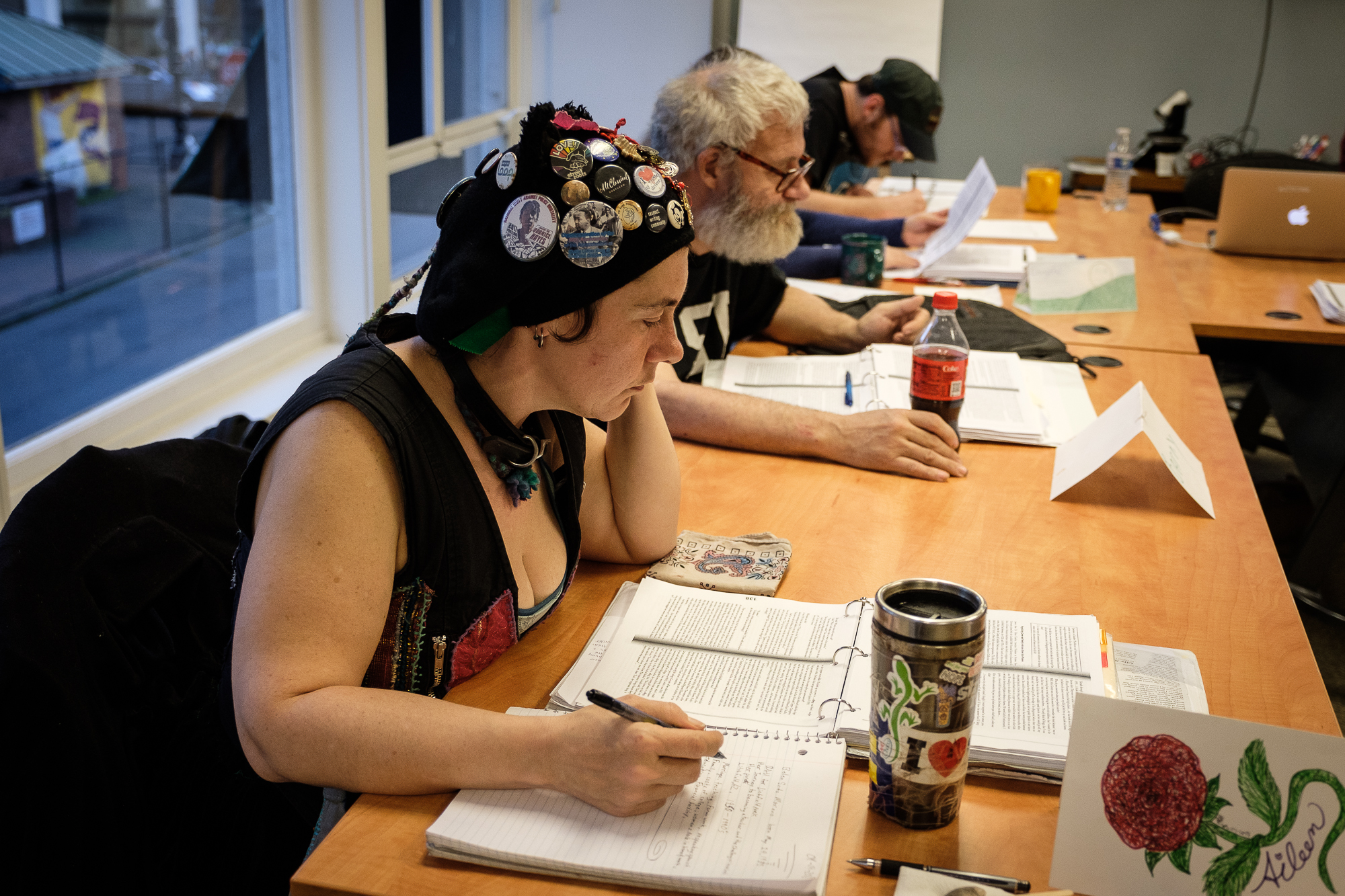 The people who share space during Humanity in Perspective, also known as HIP—a free college humanities course for adults who do not have a college degree and who face financial barriers to continuing their education—come from various but not altogether dissimilar walks of life. As HIP students, one thing they have in common is not having the various resources and privileges needed to attend college. When they walk into the classroom, they do not leave their personal backgrounds —differences—at the door: they carry their lives into lectures. What makes these classes so richly different from traditional college settings is the way the students at HIP invoke the ways they are marginalized in order to develop and discuss their thoughts and ideas with their peers.

In this space, talking about the effects of systemic oppression is not a radical topic. The students’ lived encounters with food insecurity, financial hardships, dispossession of land, bodily and emotional trauma, and more, deliberately inform how students connect with each other, their ideas, and their communities. Among this year’s graduating students was Saoírse Bell, a food activist and writer. 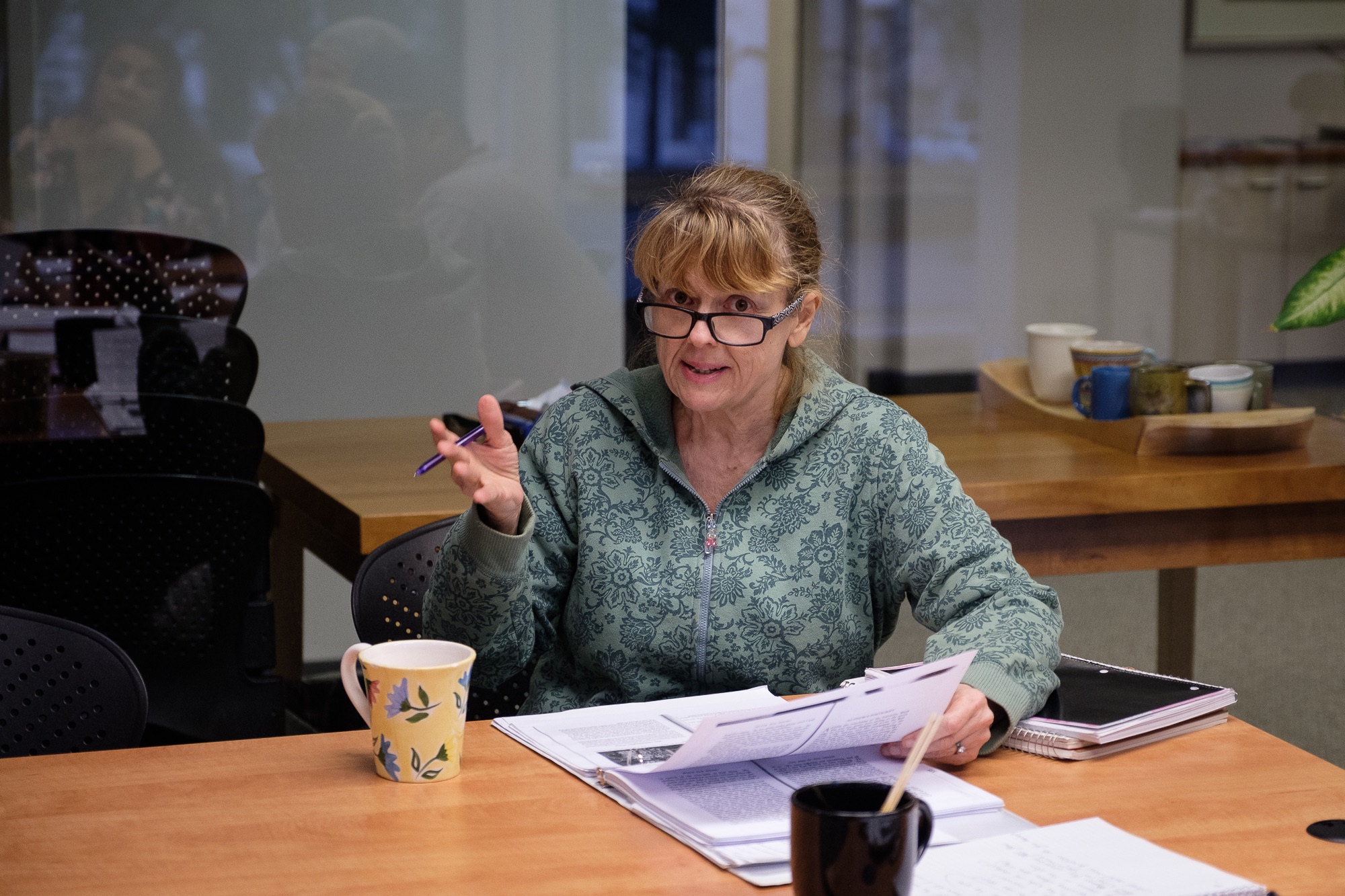 Saoírse recalls her early years on the East Coast. Living with her mother who was employed at a health food store, Saoírse became engaged with ideas and actions that promote well-being. Through the years, this knowledge has flourished and become increasingly important to her. She says that one of the primary factors that allowed her to recover from her brain injury was conscious, healthful eating. When talking about her favorite place in Portland, she reflected that the Whole Foods in Hollywood district is her go-to place. Naturally, as an avid reader and writer, her other favorite place, she says, is the library. When asked how she and her wife April like to unwind after a long day, Saoírse points to their stacks of books.

In talking about nutrition and literature, Saoírse mentions that she is writing her autobiography, to be titled The Illustrated Autocosmogyny of Saoírse Bell because she says she “always has to do it with flair!” When creating this text, she says she’s had a difficult time writing because her brain injury has affected her ability to organize and occasionally to recall and express herself. One way that the HIP course allowed her space to deal with this and experiment with her craft is by exposing her to artists who she may not have otherwise engaged with.

“This author has given me permission to write my memoir.”: Saoírse Bell talks with Michelle Patiño-Flores about reading poet Claudia Rankine.

Before she wanted to be a writer, Saoírse wanted to be a mermaid. Vocational counselors eventually convinced her that she should have a back-up plan, so she visualized an academic future. She recounts the trouble she had growing up and trying to break into her desired profession. For a long time, she dreamed of becoming a linguistic anthropologist. To that end, she worked diligently in high school to graduate early with many diverse courses under her belt. After high school, she completed a semester’s worth of credits at a local college before she withdrew.

Today, at age sixty, she still has an unmitigated love of learning and a desire to go back to school. “I’ve been trying an awful lot over the years,” she says, but it has been a difficult journey for her due to her illness, lack of resources, and unsatisfactory institutional support, among other factors. For Saoírse, joining the HIP program served two purposes: to test if she was ready for school again and to continue to fuel her never-ending search for knowledge.

“I really just want to learn.”: Saoírse Bell talks with Michelle Patiño-Flores about what she was looking for when she joined HIP.

What is special about a space like Humanity in Perspective is the people who come together to talk. Engaging with culturally acclaimed and academic materials is just one way to get a glimpse into our neighbors’ interpretations of the world. HIP students read hundreds of assigned pages of written and visual texts, and there are as many opinions as there are seats. When asked what her favorite piece was, Saoírse read an excerpt of “Black Body” from Teju Cole’s recent collection of essays Known and Strange Things, a text that she was introduced to in the Literature courses. She says what strikes her about the piece, what comforts her, is that Cole addresses the intersection of race and gender. She explains that these, along with class, are the topics she is most concerned with in her writing, and which affect her most directly in her everyday life.

If she is not reading or writing, Saoírse is collaborating with different organizations around Portland in her efforts to fight for justice and equity. When thinking about what her future holds, she says that she cannot predict which opportunities will arise for her, but she looks forward to taking on whatever lies ahead with her wife April. To the incoming class of HIP students, she advises them to “come prepared and read ahead of time. [They’re] going to make so many connections.”

Michelle Patiño-Flores did such a wonderful job with this interview! She made me feel so comfortable, I know the incoming HIP class will love her!

What We Learned This Year

Apply for Humanity in Perspective

Humanity in Perspective is a free college course for adults who do not have a college degree and who face financial barriers to continuing their education. The application deadline has been extended to September 4.

Mary Thompson, a 2016 graduate of Humanity in Perspective—a college humanities course for adults facing barriers to their education—shares what the program has meant to her and what she hopes for the future in her address to the 2017 graduating class.