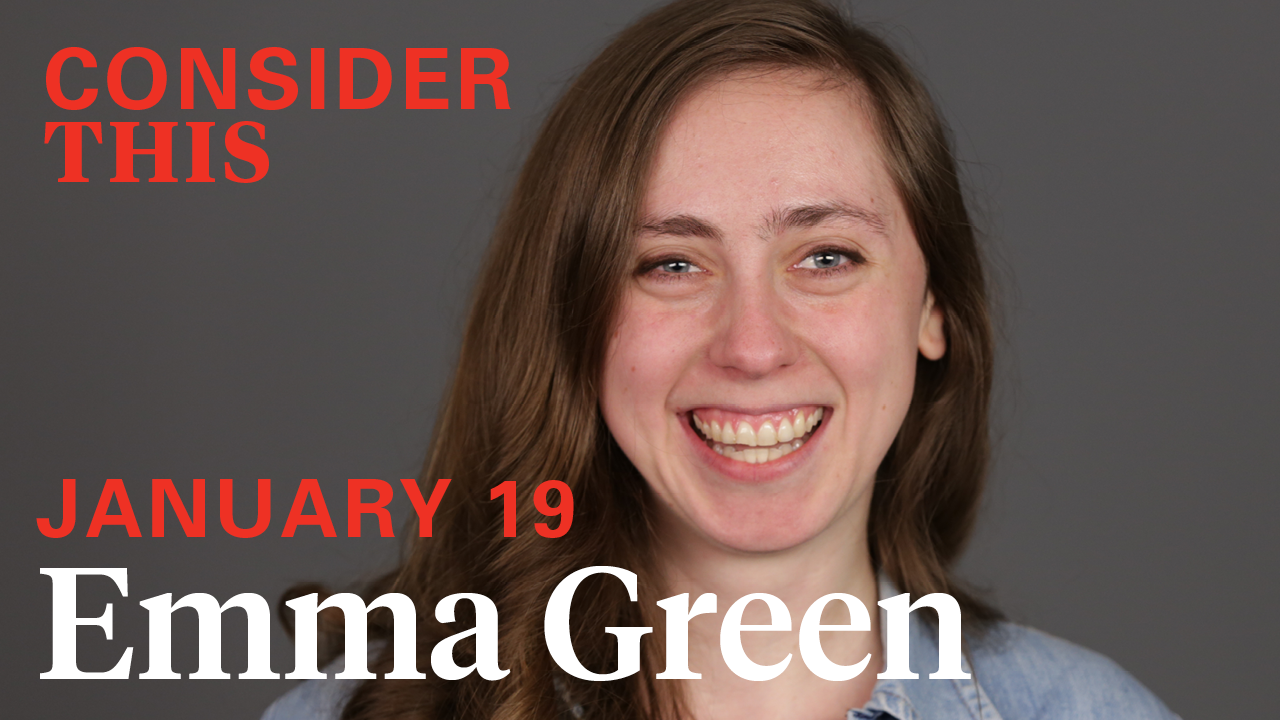 Our 2020–21 Consider This conversation series is all about democracy and civic engagement—how it works, who gets to participate, and how it can fail. On January 19, we were joined by Emma Green, a staff writer at The Atlantic who covers politics, policy, and religion. We talked about how faith overlaps with voting, running for office, volunteering, and other ways people interact with democracy in the United States.

In 2019, Emma Green won three first-place awards from the Religion News Association, and America magazine and the Saint Thomas More Catholic Chapel and Center at Yale recently named her the laureate of the 2020 George W. Hunt, S.J., Prize for Excellence in Journalism, Arts, & Letters. Emma has spoken at universities across the U.S., and her work has appeared in The New York Times, The Washington Post, and NPR. She lives in New York City.

Consider This is made possible thanks to the support of the National Endowment for the Humanities, the Oregon Cultural Trust, Northwest Natural, Tonkon Torp LLP, Stoel Rives LLP, the Kinsman Foundation, and the City of Portland's We Are Better Together program. This program was funded by the “Why it Matters: Civic and Electoral Participation” initiative, administered by the Federation of State Humanities Councils and funded by Andrew W. Mellon Foundation. This event is cosponsored by Oregon League of Women Voters.

This was so wonderful, thank you Emma Green for sharing your time and ideas, and to OH for providing this opportunity. Much appreciated.

Thank you for this conversation

Do you find that Liberals and Conservatives find different, or even opposite, meaning for the same words? ie: faith, freedom, family, caring, need, American, etc.

As a Boomer I remember "civil religion", based in Christianity which had as Ms. Green says enfolded Catholics, Protestants of all stripes including the Black churches, Jews, in a sort of semi-secular moral common ground Earlier in the 20th, based on stories I heard from older people, marriages between Catholic and Protestant were frowned on. My Catholic mom thought Protestants had horns before she went to the public HS. But in the mid-50s things came together for awhile.

A conversation with David French, senior editor for The Dispatch and author of Divided We Fall: America's Secession Threat and How to Restore Our Nation.

Join us for a conversation about organizing, movements, civic engagement, and democracy.

Did you miss one of our Think & Drink conversations? You can find audio and video from past events here.