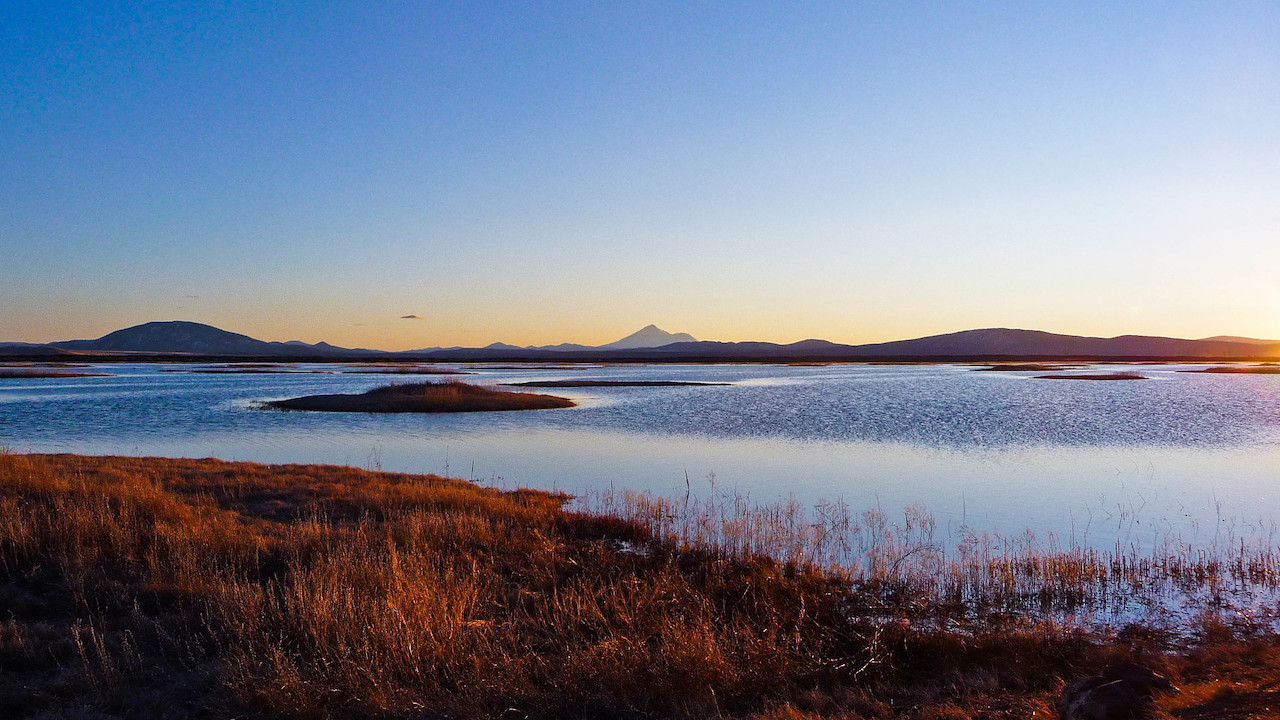 The program will begin at 5:00 p.m. Pacific on Monday, March 15, and will be streamed live on YouTube and on this page. Following the panel's discussion, at 6:00 p.m., viewers may join other participants in facilitated conversations on Zoom. To participate in the second part of the program, RSVP here.

In 2005, over twenty stakeholders signed the Klamath Basin Restoration Agreement after years of discussions aiming to resolve long standing conflicts in this region over water resources. Starting in 1918, eight dams were built in the Klamath Basin to provide hydroelectric power to local agricultural communities but this cut the size of Salmon habitat in half, harming local ecosystems and the livelihoods of Indigenous tribes that depend on the Salmon and these waters. Years of hard work and engagement among over twenty stakeholders—including Indigenous tribal groups, conservation organizations, local irrigators and farmers, PacificCorp (dam management), and governmental entities at state and federal levels—has resulted in an agreement to decommission four dams in the lower basin. This will be the largest dam removal project in a wave of similar projects in the country’s history. This process is set to begin in 2022, but many issues about water rights and cleanup responsibility remain unresolved. Conflicting claims to history make engagement around this issue particularly difficult, yet this example of diverse-stakeholder engagement has been nationally recognized and offers many lessons about how we might approach similarly complex challenges.

Chairman Russell Attebery, Karuk Tribe
Chairman Russell “Buster” Attebery was born and raised along the Klamath River. He received his Teaching Credentials from Humboldt State Indian Teacher Education Project, and has been actively involved in education throughout his career. Chairman Attebery has advocated for the tribe and river throughout the dam decommission and river restoration process. He is passionate about restoring clean water and spawning grounds to the basin so Karuk children can grow up fishing and providing for their communities along a healthy Klamath River.

Mark Bransom, KRRC
Mark Bransom is the CEO of the Klamath River Renewal Corporation (KRRC) and has had two decades worth of experience working around water management in planning, engineering and construction with a variety of stakeholders in the Western United States, including Tribal Nations, NGOs, state and local government and more. Before coming to KRRC, Bransom was the Senior Vice President in Water Resources & Environmental Management at CH2MHill where he worked on environmental restoration projects involving large water infrastructure. Bransom has much experience working with a diverse range of stakeholders and facilitating discussion around water management issues.

Chairman Don Gentry, Klamath Tribes
Chairman Don Gentry is the third term elected chairman of the Klamath Tribal Council. Based in Chiloquin, Oregon, Chairman Gentry first served as vice chairman in 2010 and works to serve with the philosophy of “service-leader”. Main themes to his work include water and land management, housing, children and education, and more.

Becky Hyde, Klamath Basin rancher and Oregon Department of Fish and Wildlife Commissioner
Becky Hyde serves as commissioner of the Oregon Fish and Wildlife Commission, appointed by Gov. Kate Brown in 2019. Hyde has years of experience working in the Klamath Basin, serving on multiple committees and commissions focused around water management and more. As a rancher, Becky works between the counties of Klamath and Lake, and brings a unique perspective to the Klamath Basin decommissioning issue as a part of the “Coalition of the Willing”- a group that works around the water issues in the Klamath Basin. Hyde has much experience facilitating discussion across differences with diverse groups of stakeholders, working within intricate environmental issues such as sage grouse habitat restoration negotiations between ranchers and environmental groups.

Chairman Joe James, Yurok Tribe
Honorable Joseph L. James, the Yurok Tribal Chairman is from the village of Sregon. Chairman James has worked for Tribal Governments for the last 22 years in the areas of fisheries, water policy and law, infrastructure, protection of cultural resources, economic development and leadership. He has served as the Yurok Tribe’s Transportation Manager, East District Councilmember and most recently elected as the Chairman in October 2018. As part of his Nation-building actions, Chairman James has expanded the economic development portfolio, protected the Yurok Tribe’s natural and cultural resources and have furthered the importance of educational achievement for tribal youth, and instituted dynamic elders programs and services.

Jim Proctor, moderator
Jim Proctor is professor and director of the Environmental Studies Program at Lewis & Clark College, where he has served since 2005. Jim’s academic career began in religious studies, moved to engineering, and culminated in geography, and his work and teaching emphasize strong interdisciplinarity. Jim’s recent publications address environmental theory and environmental engagement, and their applications to the undergraduate environmental curriculum; one major initiative is EcoTypes, where students across the country explore their environmental ideas. Jim grew up in Canyonville in rural southern Oregon, and is eager to learn more about the Klamath Basin—its land, water, lives, and livelihoods—via this panel.

Discussion and breakout leaders: Clara Daikh, Janie Overland, and Kat Altaffer
Janie, Clara, and Kat are undergrad Environmental Studies students at Lewis & Clark College.  Clara grew up in San Francisco and is studying religion as it relates to environmental issues, specifically in the river systems of the Pacific Northwest. Janie is from San Diego and is an environmental studies major and political science minor, focusing on climate change policy at the local level. Kat is from Tucson, Arizona, is a philosophy major with a minor in environmental studies, and is interested in climate change discourse and policy.

Consider This with Astra Taylor

Consider This with Clint Smith

Consider This with Eric K. Ward